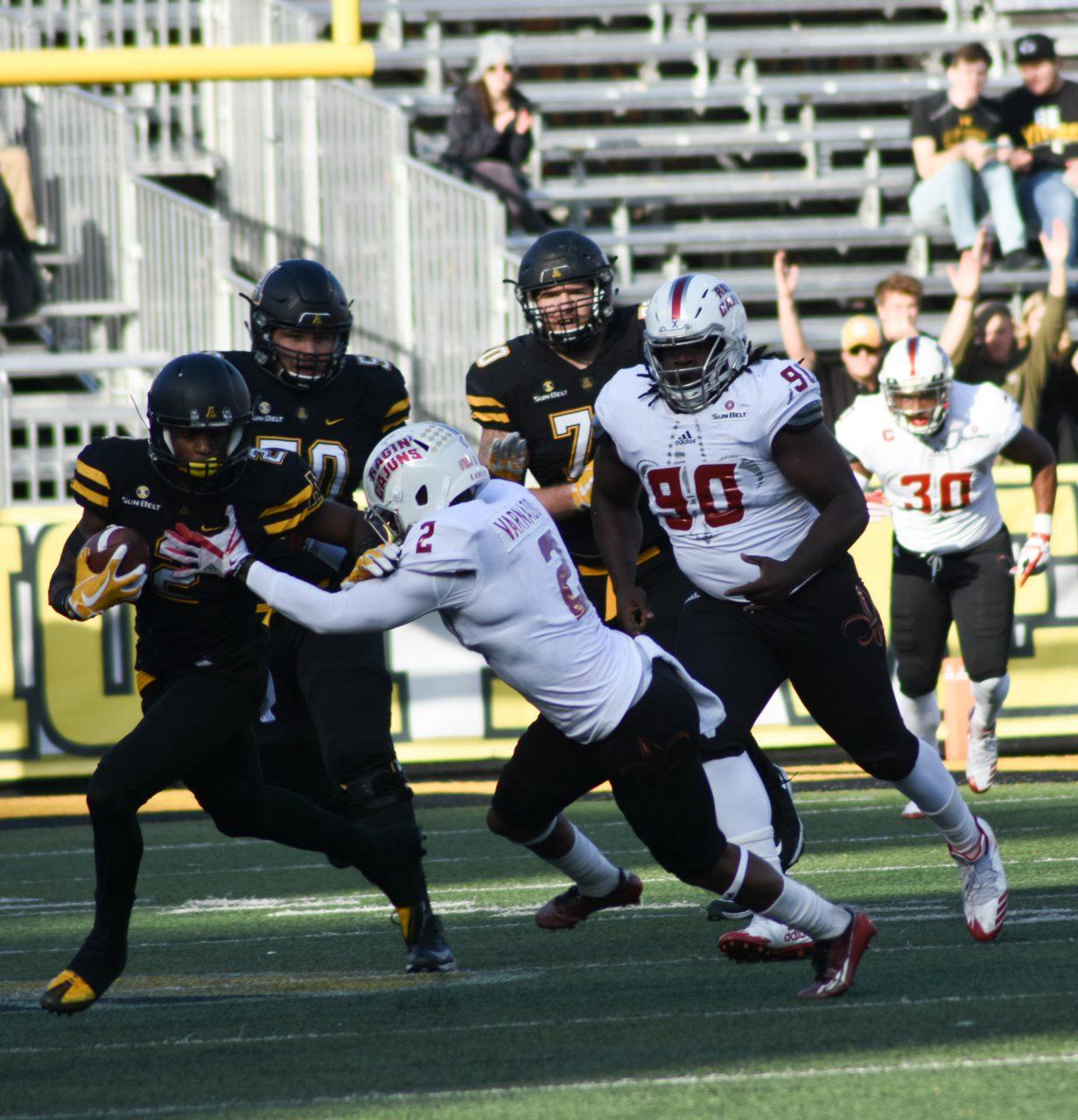 Senior quarterback Taylor Lamb had a very efficient game, only throwing 22 times, but completing 17 of those. Lamb threw for 242 yards and four touchdowns. Lamb didn’t need to throw a lot in this game, but when he did, it was almost completed.

Junior running back Jalin Moore was able to set the tone early with hard run right down the middle of the Ragin’ Cajuns’ defense. He was able to find the end zone twice, running for over 100 yards and averaging almost 7 yards a carry. As a group, the Mountaineers’ running backs ran for over 300 yards, with freshman running back Daetrich Harrington stepping up for a career high of over 118 yards and scoring a touchdown.

Freshman wide receiver Thomas Hennigan was able to climb into the record books for Appalachian State today with four touchdown receptions, tying the school record for touchdowns in a single game. Many receivers were able to get in on the action, as six different receivers caught a pass.

Although they did not see a lot of action catching-wise, the tight ends were able to lay key blocks to ignite the running game for the Mountaineers. With this game being a blowout, the Mountaineers did not need the passing plays much throughout the game.

The offensive line was solid in tonight’s game, not allowing a sack, and giving time for Lamb to set up and complete passes. The line also was able to push back the Ragin’ Cajuns’ defensive line allowing App State’s running backs to rush for over 350 yards.

After the Ragin’ Cajuns’ first possession of a touchdown, the cornerbacks of App State settled down and shut down the passing game. The Ragin’ Cajuns only threw the ball 26 times and completed 15 of these attempts, but for only 207 yards. Clifton Duck was able to shut down his half of the field and also picked off the Ragin’ Cajuns’ quarterback Jordan Davis.

The Mountaineers were able to stop the Ragin’ Cajuns’ return game due in part because App State punted the ball one time. Redshirt-freshman Chandler Staton was able to come in and do his job, connecting on all of his extra points.

Player of the Game: Thomas Hennigan

Hennigan was utilized most in the passing game, and he delivered. He was targeted five times and caught them all, four of them for touchdowns, which is a school record. He also had a career-high in receiving yards with 99.

App State dominated this game from start to finish in an impressive way, controlling by the run. When the Mountaineers need to throw, Hennigan always seemed to be at the right place at the right time, grabbing four touchdowns. Moore’s physical play set the tone on how the whole game would be played out. With the win, the Mountaineers clinch a share of the Sun Belt Conference championship for the second consecutive year.