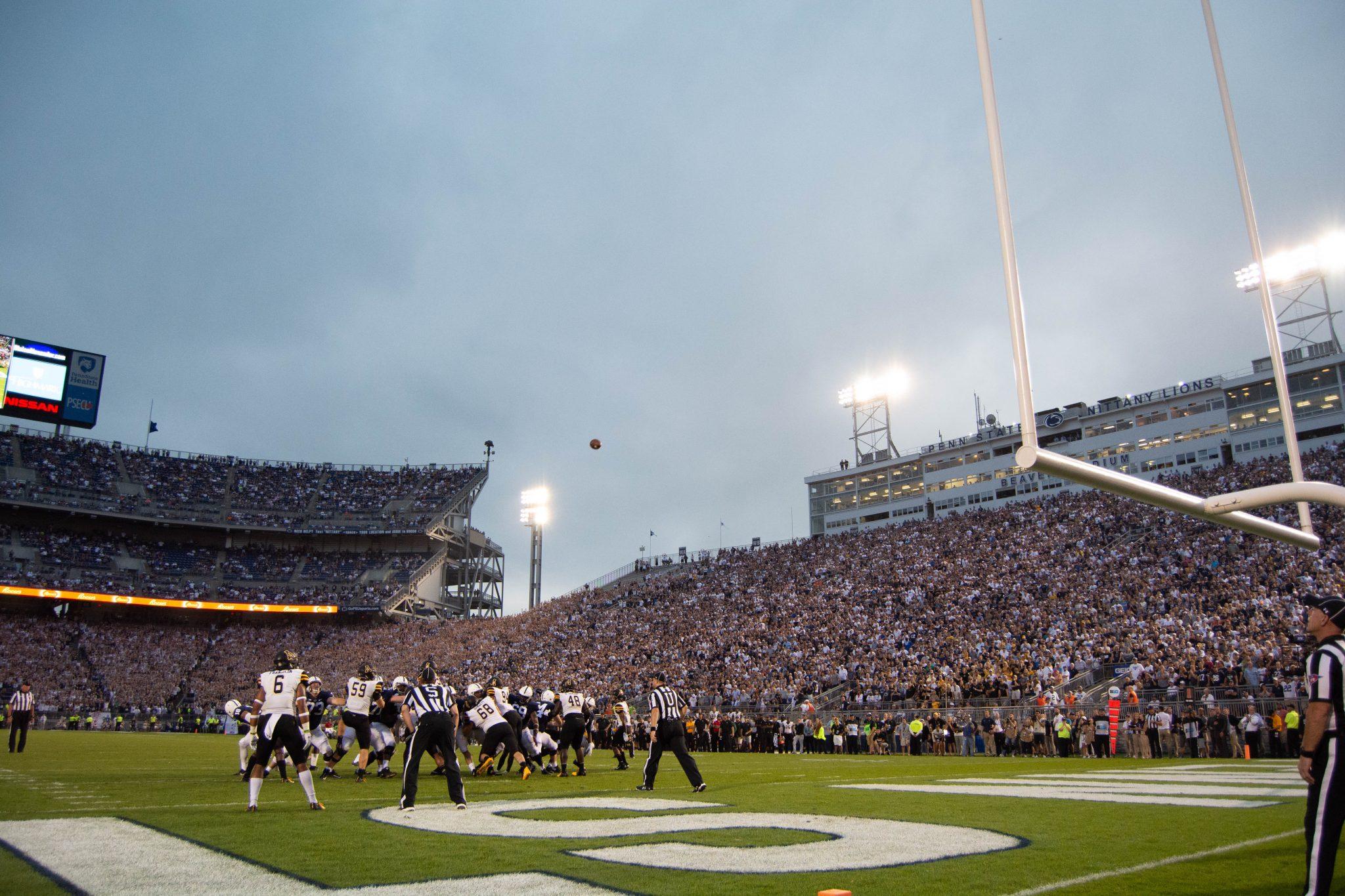 Penn State attempts an extra point against the Mountaineers. App State lost to the Nittany Lions 45-38.

Across the board, redshirt sophomore quarterback Zac Thomas had a great night. He put up 270 yards and two touchdowns on a 65 percent completion rate. Although he threw an interception, it was on a good pass that the defender made an amazing play on. Thomas also ran for 43 yards and another touchdown. He played well enough to win and was in a great position to, but it just didn’t happen. For Thomas to play so well, especially in such an intense atmosphere and against such an elite defense, was a relief for Mountaineer fans. Following Taylor Lamb’s departure, the quarterback position was a bit of a question mark. After tonight’s performance, the job is Thomas’ job to lose. The reason Thomas doesn’t get an A+ here is because the passing game was barely effective in the first half and all three of Thomas’ touchdowns came in the fourth quarter.

Much like Thomas, senior Jalin Moore had an outstanding night but waited until it was almost too late to turn it on, doing most of his damage in the second half and fourth quarter. Moore totaled 88 rushing yards and a touchdown on 18 carries. He also caught five passes for 36 yards. Moore finished the night with a strong average of 4.9 yards per carry. Redshirt sophomore Darrynton Evans also got three carries for a solid nine yards. It would be impossible not to mention his 100-yard kick return for a touchdown early in the first quarter, but more on that in special teams. Grad student Dominique Heath also broke loose for 19 yards on his only carry of the night. All in all, a great night for the running backs unit.

On a night where nine players caught passes for a total of 292 yards and a pair of touchdowns without many mistakes at all, it’s impossible to give the receiving corp less than an A+. They were able to get open, make plays, break tackles and score touchdowns. What more could you ask for? Redshirt sophomore Corey Sutton caught six passes for 87 yards, sophomore Malik Williams caught four passes for 66 yards and a pair of touchdowns, Heath caught two passes for 35 yards, sophomore Thomas Hennigan caught four passes for 28 yards and Jalen Virgil caught a pass for 14 yards. As a whole, the receivers were efficient and did what they were supposed to do to the fullest extent.

Starting senior at the tight end spot Collin Reed dropped his only target while freshman Henry Pearson and junior Devin Papenheim both caught one pass for eight yards each. The tight ends were used more for extra protection and blocking on the front lines. Papenheim left the game with an injury but has not yet been evaluated. The extra protection they provided helped the offense but it’s needless to say they could have had higher production.

The defensive line had an up and down day. While they did an excellent job keeping Penn State senior quarterback Trace McSorley in check, holding him to just 230 yards passing and pulling him down for one sack, the Nittany Lions rushing committee did a number on them. They allowed over 200 rushing yards and five rushing touchdowns, including a long 27-yard run for a score where Penn State freshman running back Ricky Slade went untouched up the middle. While it is safe to say that the Mountaineers will not face an offense as potent as the Nittany Lions again this season, they will need to do better stopping the run in the future if they want to win games.

The linebackers had a pretty good day, with senior Anthony Flory leading the team in tackles with nine and junior Jordan Fehr coming in second with 8. I dock them a letter grade for the same reason as the defensive line: run production. The linebackers are the second line of defense in the run game and they’re allowance of 219 rushing yards cannot be acceptable going forward. The Mountaineers still have several formidable rushing attacks to see this season, including seniors Warren Wand from Arkansas State and Wesley Fields from Georgia Southern.

The secondary had a good day overall. Junior cornerback Clifton Duck came in third on the team in tackles with seven and also had a pass breakup, as did senior cornerback Tae Hayes, who paired it with six tackles. Junior free safety Desmond Franklin had four tackles and also added a quarterback hurry on McSorley. Duck and Franklin both had costly penalties however and did allow several long completions, including a 46 yard connection between McSorley and Penn State wide receiver KJ Hamler.

Special teams had a great day all around. It all got started with redshirt sophomore running back and wide receiver Darrynton Evans returning Penn State’s first kickoff 100 yards for a touchdown, only the second time in school history that a kickoff has been returned that long. New punter redshirt freshman Clayton Howell averaged 43.5 yards on six punts, including a 53-yarder and two punts landing inside Penn State’s 10-yard line. Redshirt sophomore kicker Chandler Staton was perfect on point after attempts and also had a successful 38-yard field goal attempt. While he did have a missed attempt late, the kick was from over 50 yards and missed by only inches.

Player of the Game: Zac Thomas

The Mountaineers’ new starting quarterback had a fairly solid start to his career, including a huge fourth quarter. While 270 yards and two touchdowns isn’t the biggest game for a quarterback, Thomas stood tall against a tough Penn State defense in front of what may end up being the largest and loudest crowd he plays against during his career.

Overall, the Mountaineers played a solid game. Zac Thomas had a great game for his starting debut, the rushing committee picked up nearly 200 yards the receiving corps made some excellent receptions and the defense held their own against one of the most potent offenses in the country, in front of one of the most raucous crowds in the country. They did not play a perfect game, allowing a little too much offensive firepower from the Nittany Lions and committing too many costly penalties. But all in all, the Mountaineers had a good start to a season that shows promise to end in another bowl appearance.