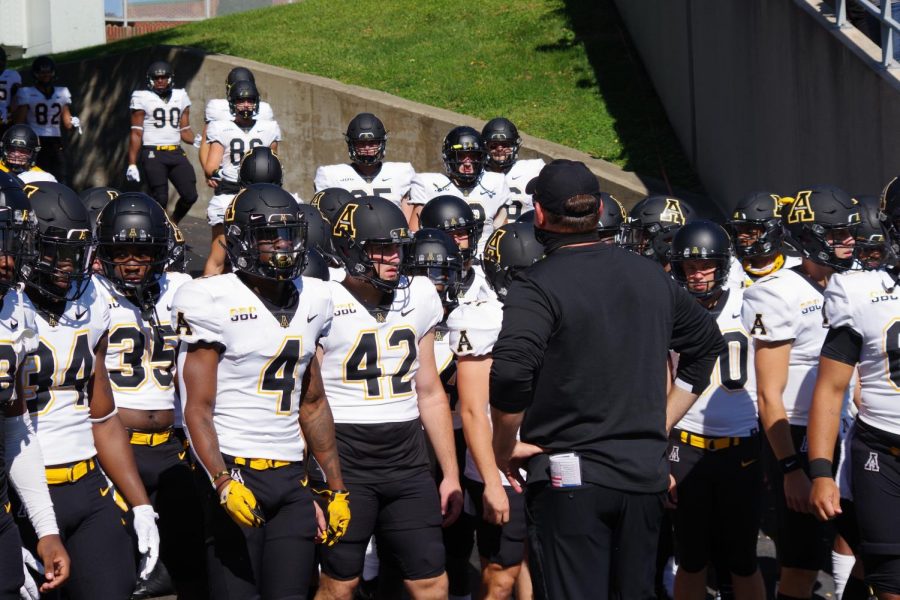 App State head coach Shawn Clark briefly speaks to his team before they take the field against Marshall.

App State football is looking to get back in the win column after a tough loss against the Thundering Herd of Marshall last weekend. The week three matchup against Campbell is App State’s final non-conference game of the season. The most recent meeting between App State and Campbell was in 2014, when the Mountaineers won 66-0.

In App State’s 17-7 loss at Marshall, the Mountaineers racked up 364 total offensive yards, including 268 passing yards and one touchdown from senior quarterback Zac Thomas, but struggled to establish the run.

As the Mountaineers are recovering from a loss, Campbell is looking to pick up its first win of the season. Campbell most recently fell to Coastal Carolina 43-21 on Sept. 18. The Camels nearly pulled off an upset against short-handed Georgia Southern in week one, ultimately falling 27-26. Georgia Southern was missing 33 players due to suspensions, COVID and injuries.

The game between the Mountaineers and the Camels gives App State an opportunity to correct mistakes from the Marshall game.

“We gotta go back, look at tape, do better next week, and fix what we messed up on,” senior center Noah Hannon said.

The Mountaineers and Camels kick off Sept. 26 at noon at The Rock. The game will air on ESPN+.

Player to watch: Redshirt sophomore running back Camerun Peoples has 159 rushing yards and one touchdown so far through two games in the 2020 season. As App State tries to rebound from a loss in which they struggled to run the ball effectively, Peoples is a player Campbell will need to watch out for. Against an FCS opponent and in the last non-conference game before Sun Belt play, look for Peoples to help get the Mountaineer rushing attack back on track Saturday.