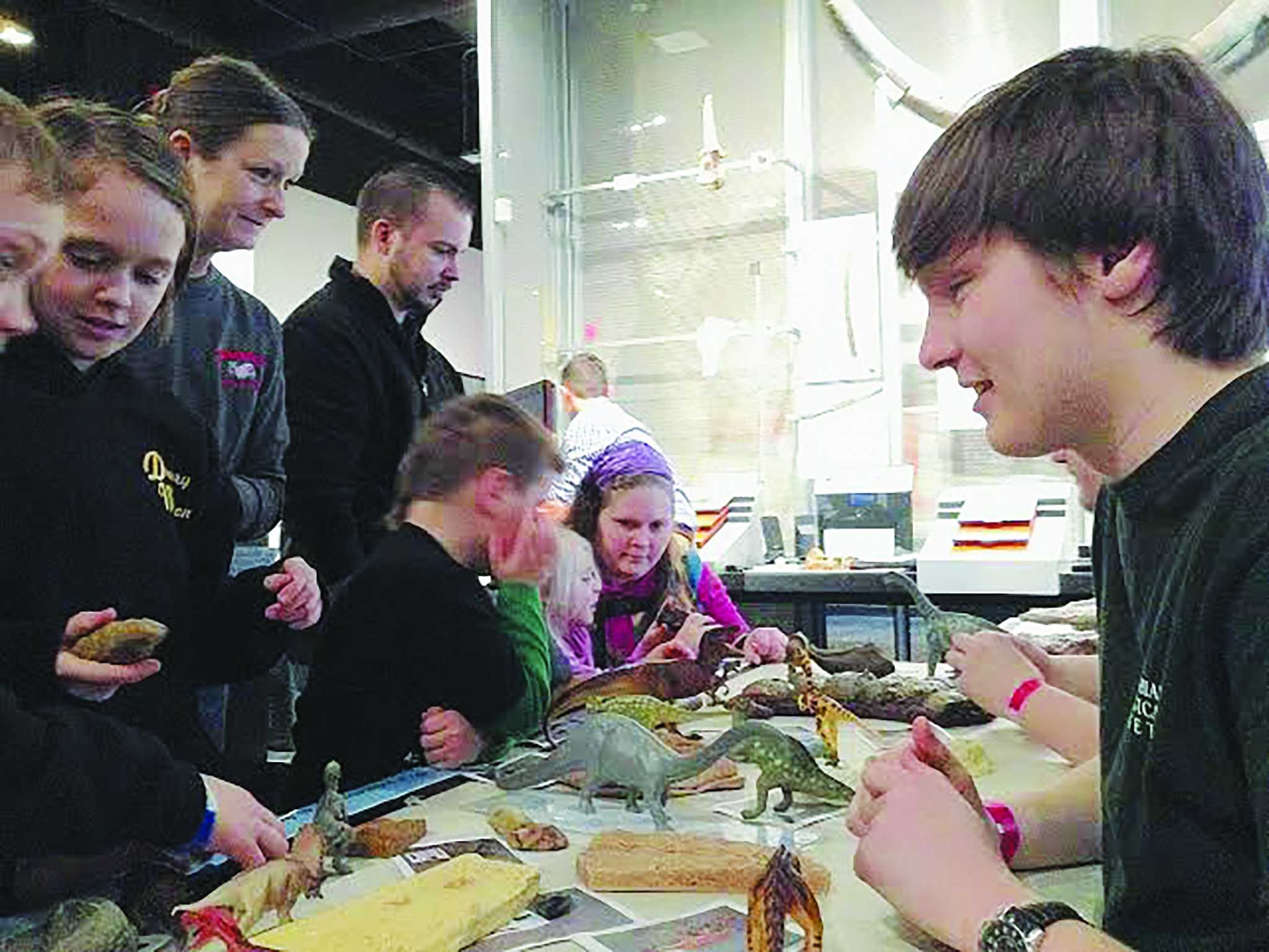 Andy Heckert, the geology professor who led the trip, said the day consists of dinosaur themed exhibits and displays, and many schools set up displays where they interact with the museum’s patrons, showing fossils and answering questions.

Austin Deans, a freshman biology major, said they wanted to raise awareness for Appalachian’s geology program but also for the sciences in general.

“We talked to a lot of people about our program and what we’re doing, and hopefully we raised some interest for Appalachian geology,” Deans said. “But the entire event was focused around interest in science and paleontology, so I think we raised a lot of awareness about science besides at Appalachian.”

“We showed the public a bunch of casts and real fossils, and we have a bunch of toys that we match up to show kids,” Heckert said. “What makes us different than all the other exhibitors is that we actually brought some sediment and some microscopes, and we had a couple students looking through the microscopes, looking for new fossils right there. So we’re actually doing science while we’re there, actively improving the fossil record.”

“We had a number of fossils on display, such as Triceratops bones and Tyrannosaur teeth,” Hendrix said.

In addition to the sizable fossil collection, Appalachian’s geology students brought another exhibit with them: an interactive video game.

Senior geology major Haviv Avrahami has modified a 2001 Playstation 2 game titled “Jurassic Park: Operation Genesis” to include more dinosaur species and updated the appearances of the existing dinosaurs. He also added brief descriptions of all the dinosaurs that the original game lacked.

“The game was a fun little park builder, almost like ‘The Sims’ or ‘Roller Coaster Tycoon,’ where you could fly around and explore the park and cool things like that,” Avrahami said. “A few years ago, the idea popped into my head that there’s a lot of potential here, if I could get into the code of the game to turn this into a simulation that could be used as a museum display or an educational tool.”

Avrahami said the video game was one of the most popular parts of Appalachian’s exhibit because it shows dinosaurs as they actually looked, rather than how they are depicted in movies.

“When people went and saw ‘Jurassic World,’ they saw a great movie with a great plot, but they didn’t see good science behind it,” Avrahami said. “My goal was to display these dinosaurs in a more scientifically accurate way.”

Heckert said Appalachian’s exhibit was the biggest at Dino Day.

“There were some other schools there, but they had no real exhibits,” Heckert said. “We go all in on this more than anybody else.”

Heckert said he puts such a big emphasis on these sorts of events because it is important to help educate the public.

“Fundamentally we’re a university, so we’re all about education,” Heckert said. “We want to do outreach because we want an educated public and it’s important to reach out to people when they’re interested in science.”

Deans says the high level of the school’s display speaks volumes about the culture at Appalachian.

“It says that our school cares a lot about citizen science and getting kids interested in the sciences,” Deans said, “We managed to talk to at least 600 people, and that’s really impressive.”