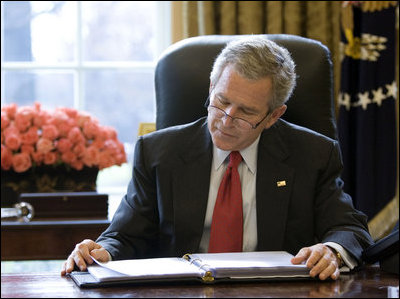 It would not be wrong to call former President George W. Bush a controversial president. The merits and success of ramification of his education reform bill, signature tax cuts and active, aggressive foreign policy are still being debated today and will likely be debated for years to come.

Despite being such a divisive figure, Bush has made a comeback of late; according to Gallup, he has improved from only a 35 percent approval as he left office in 2009 to an impressive 59 percent today.

Bush admirably remained silent during his successor’s presidency, as most presidents opted to do. Even former President Barack Obama has remained mostly quiet, rarely mentioning his successor by name despite a number of controversial actions.

It is remarkable then that Bush gave perhaps his greatest speech since his famous bullhorn speech in the rubble of the World Trade Center.

To be clear, Bush never once mentioned President Donald Trump by name in his speech at the “Spirit of Liberty: At Home, In The World” forum in New York City on Thursday. His speech targeted all of modern American politics, and as an elder statesman in both his own party and and in the world, he warranted attention when he spoke of “nationalism distorted into nativism.”

Far from a blind critique of his successors, Bush gave a measured and rational response to the ills of American politics. Fundamentally, his was a call for common decency.

When he condemned “discourse degraded by casual cruelty” and “[judging] other groups by their worst examples while judging ourselves by our best intention,” this was a critique of all sides.

When he condemned a rising protectionist sentiment that does not just harm the economy but it jeopardizes global relations, a rising anti-market sentiment and a rising trend of anti-democratic movements; He condemned the extremes that dominate modern politics.

What does Bush propose America fall back on? It is not a radical solution – it is what Americans have done for over 70 years. Learn from our past, adapt for the future and try and do good not just for ourselves, but for mankind.

He called for a defense of our free-market values, especially in trade. He called for increased cyber-defense, not just for security but to stop the actions of hostile nations like Russia that seek to divide us. Most of all, he called for a return to the values of the United States’ founding: that being an American is not about where you were born, but a set of values and responsibilities.

These values, he said, mean that “people of every race, religion, and ethnicity can be fully and equally American,” that “bigotry or white supremacy in any form is blasphemy against the American creed,” and that “the very identity of our nation depends on the passing of civic ideals to the next generation.”

Notably, this is not a responsibility citizens alone can achieve. It requires our civic institutions to relearn their former strength for a modern age, and it requires leaders that recognize the need to live up to the United States’ shared values.

To some on the right, this basic call of national decency – a call to “Make America Great Again,” according to Trump – has been perceived as an attack.

Talk radio host Rush Limbaugh, who once prided himself as the “Titular Head of the Republican Party,” responded by describing immigration as “an invasion that has been ignored.”

Commentator Laura Ingraham complained that Bush did less for social conservatives in eight years than Trump has in eight months never mind that Bush signed the Partial Birth Abortion Ban Act of 2003 and fought for faith-based initiatives throughout his entire presidency.

The reality is, if you look at this speech, one calling only for a return to basic decency and a reclamation of American leadership, and feel threatened it is not Bush that is the problem – it’s you.

Trump wants to “Make America Great Again” with walls, division and deference. Bush wants to make it great again with openness, compassion and values. It’s time we take his advice.

Eric Cunningham is a senior journalism major from Hickory, North Carolina. You can follow him on Twitter at @DEricCunningham.