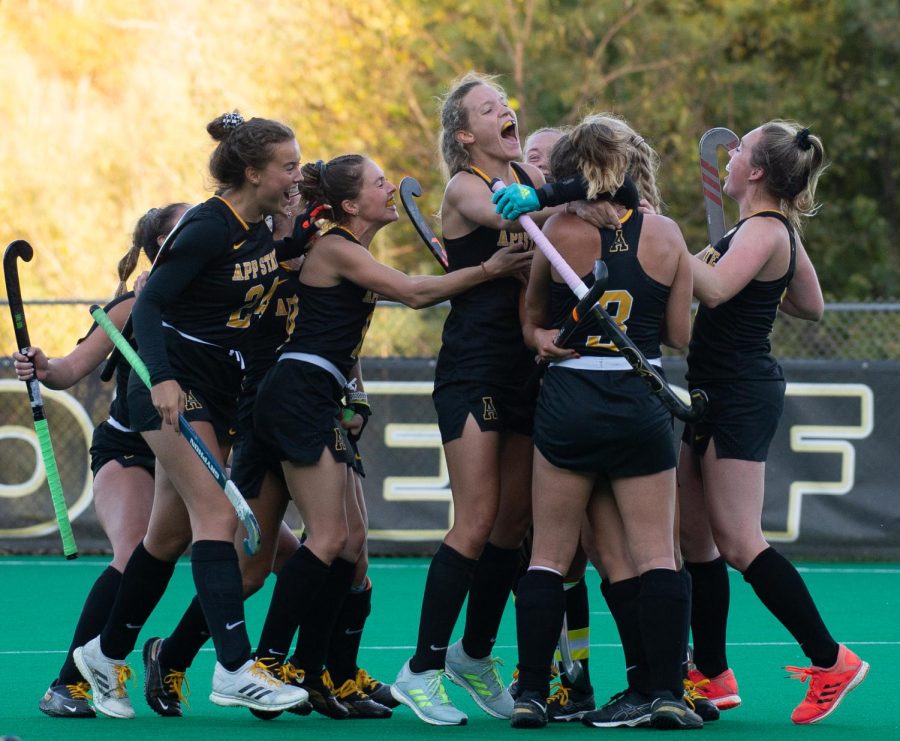 Frederike Stegen celebrates with her teammates after finding junior midfielder Pauline Mangold for a game-tying goal against No. 22 Kent State.

App State field hockey traveled to Bellarmine and secured a 4-2 victory over the Knights Oct. 10. What was supposed to be a normal conference matchup ended up becoming a game that will go down in university history within just two minutes, thanks to an assist from one player.

In the second minute of the first period, the Mountaineers took the lead after a goal by sophomore midfielder Pauline Mangold. She was assisted by senior midfielder Friederike Stegen, who recorded her 23rd collegiate assist, becoming the program’s all-time leader in assists.

“She draws a lot of attention during games, but when drawing the attention, she likes to give the ball up,” head coach Meghan Dawson said. “She doesn’t want to be singled out and be special. She wants to be part of the team and wants to help her teammates get better.”

Born and raised in Laatzen, Germany, Stegen came to the U.S. to play field hockey and be a student athlete. In Germany, students are not allowed to play sports while in college. They have to play sports in their free time. Stegen was attracted to the idea of becoming a student and an athlete, so when Dawson asked her to represent the Black and Gold, it was an opportunity she couldn’t turn down.

“I really liked the idea of being able to go to college and play a sport too,” Stegen said. “I actually didn’t know of App State before, but Megan reached out to me. We set a time to meet and talk on Zoom, and I really liked it.”

Coming from the flatlands in Germany to the cold Appalachian mountains, Stegen managed to integrate her field hockey talents easily her freshman year. Stegen hit the ground running as she started all 21 games and was ranked first in the Mid-American Conference with nine assists and 0.43 assists per game. Stegen finished the season with seven goals and was named to the MAC All-Tournament team after recording two goals and two assists in postseason play.

“I’m glad I could help the team to win games and to assist my teammates to score goals,” Stegen said. “It’s a team sport. That’s what the game is about.”

Stegen continued her form from her breakout season her sophomore year, ranking first in the team and tied for fifth in the MAC with six assists. She earned All-MAC second team honors and was one of 14 Mountaineers selected to the Academic All-MAC team.

“It’s funny because back home in Germany, we don’t have any awards whatsoever. I didn’t even know what that was the first time, but I was obviously happy that I got it,” Stegen said.

Stegen doesn’t just assist her teammates on the field but also off of it.

“She loves competing, so she brings a good dynamic, and all the girls love her off the field,” Dawson said. “She has the best of both worlds, where she is both a good hockey player, and she also wants to be good friends with everyone. She wants to make the most out of her experience.”

App State played its final home game against No. 22 Kent State, falling 2-1 in an overtime thriller, where Stegen secured an assist in the final second of the fourth period to force overtime.

Stegen plans to continue expanding her assist record as Dawson confirmed Stegen will be staying for a fifth year to represent the Black and Gold.