Getting on the write track: Creative writing club provides space for authors 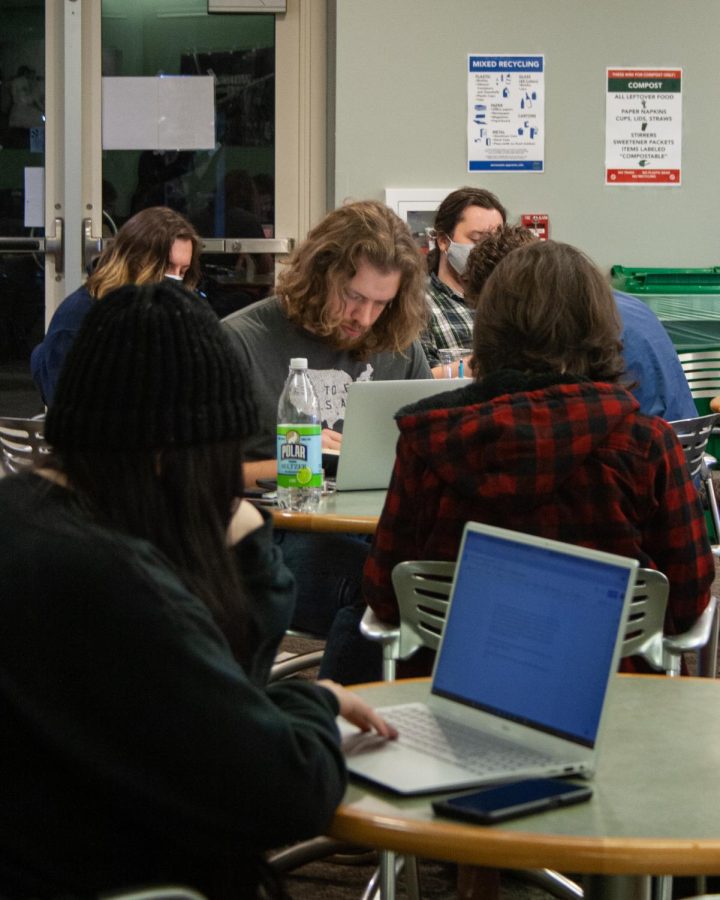 When one creative writing student transferred to App State, he struggled to find time in school to write. After noticing a writing club shortage on campus, he decided to start his own.

Daniel Ham, a junior, founded Author’s Atmosphere, a club offering space for writers to share their creative works while setting aside time for individuals to engage in their creative processes.

“For the most part, this is just people working on projects that they may hope to someday publish or just for fun,” Ham said. “I know a few people who don’t plan on ever becoming a writer as their profession, but they just love it so much that they have to have a time to come do it.”

Club member Rowan Riggs is a secondary education major and an avid writer. They said they joined the club to have a set schedule for their writing and gain more insight from fellow writers.

“To have an excuse to sit down for 30 minutes, no procrastination, is very helpful for me,” Riggs said. “And I like being a part of a community and learning from others perspectives.”

For the first half of club meetings, members spend roughly 30 minutes immersing themselves in their creative works. Ham said the second half of meetings are more social, where members split into smaller groups to exchange pieces and discuss advancements in each story. At the end of each meeting, the group engages in a guided discussion where Ham throws out a topic and the group shares personal perspectives.

Riggs said that as a future educator they like hearing the perspectives of their peers on what they wish would’ve been incorporated into their middle school curriculum. They said the club has been an excellent source for this feedback.

Club member Wells Whitman, a sophomore English major with a concentration in creative writing, was in Ham’s class when he first proposed the idea for the club. Whitman said he was immediately on board and works on songs he’s writing, short stories and projects pertaining to his courses in the club.

“I love putting words on paper, and there’s a lot of freedom and creativity you can have with creative writing, especially with all the people here,” Whiteman said. “There’s people to share it with and who care about what you’re doing, and you get to care about what they’re doing.”

Through Author’s Atmosphere, Ham said he’s gotten over the fear of sharing his written works.

“I can share my work with, you know, a buddy right next to me, and he’ll read it. And we’re friends. So if he says, ‘this part really sucks,’ I don’t take it to heart,” Ham said. “That’s been the real thing that has helped me improve.”

Aaron Lamb is working on his master’s degree in social work and is an active Author’s Atmosphere member. Lamb said he joined the club to schedule a time for socializing and writing in his busy week as a graduate student.

“It’s about having creative space to think through problems and write interesting stories, and to be empathetic with people that might not even exist,” Lamb said about his love for creative writing and initiative for joining the club.

Lamb said he doesn’t have a plan to publish his works, rather he just enjoys the creative process, curating stories and worlds that reflect his interests.

“I just write them for myself,” Lamb said. “For me, it’s just a way to work through fun and interesting concepts in my head.”

Lamb creates new worlds by crafting his own fantasy stories that are written based off of certain tabletop role playing games. He is working on a piece that exists in the realm of Dungeons & Dragons.

Ham said his affinity for creative writing sparks from the ability it gives him to create fantastical worlds just by stringing the right words together. He said he loves that writing gives creators the freedom to explore those worlds.

“I love creating worlds and kind of making the rules yourself inside those worlds,” Ham said.

“It’s completely open to anybody who wants to write. And by joining it, you’ll meet other people who have that same passion, and you’ll learn and you’ll grow from it,” said Mackenzie Sigmon, a junior English major with a concentration in creative writing.

Lamb advises anyone on the fence about joining the club to attend at least two meetings to feel out the club and the writing community it provides.

“Come to two meetings because it can be a little weird your first time. And it can be a little tough, like breaking through to a group,” Lamb said. “But I’m sure by the time you finish your second session, you know whether or not you really want to stick it out for a few more.”

This year, a number of the club’s members participated in the NaNoWriMo, an acronym for National Novel Writing Month, a nonprofit organization that hosts a writing challenge every November. The challenge is to write a 50,000 word novel in one month.

Sigmon was a participant in last year’s NaNoWriMo. It was Sigmon’s first year entering the competition, and she completed 50,000 words in a month’s span.

“On November 1, I had my entire story planned out, and that’s the one I stuck with for the entire month while I completed the goal of 50,000 words,” Sigmon said. “I hit the goal and finished NaNoWriMo, but the book is still being written.”

Riggs has participated in the NaNoWriMo for the past eight years. This past year they completed a 600 page fantasy children’s novel.

Riggs said NaNoWriMo combined with the club has positively impacted their writing. They said the club provides a more concrete schedule and, similar to NaNoWriMo, it stops overthinking during the writing process.

Ham stresses that Author’s Atmosphere is for everyone and encourages writers of all degrees to come to the club to create and socialize. The club meets Wednesdays at 7 p.m. at Wired Scholar in Belk Library.