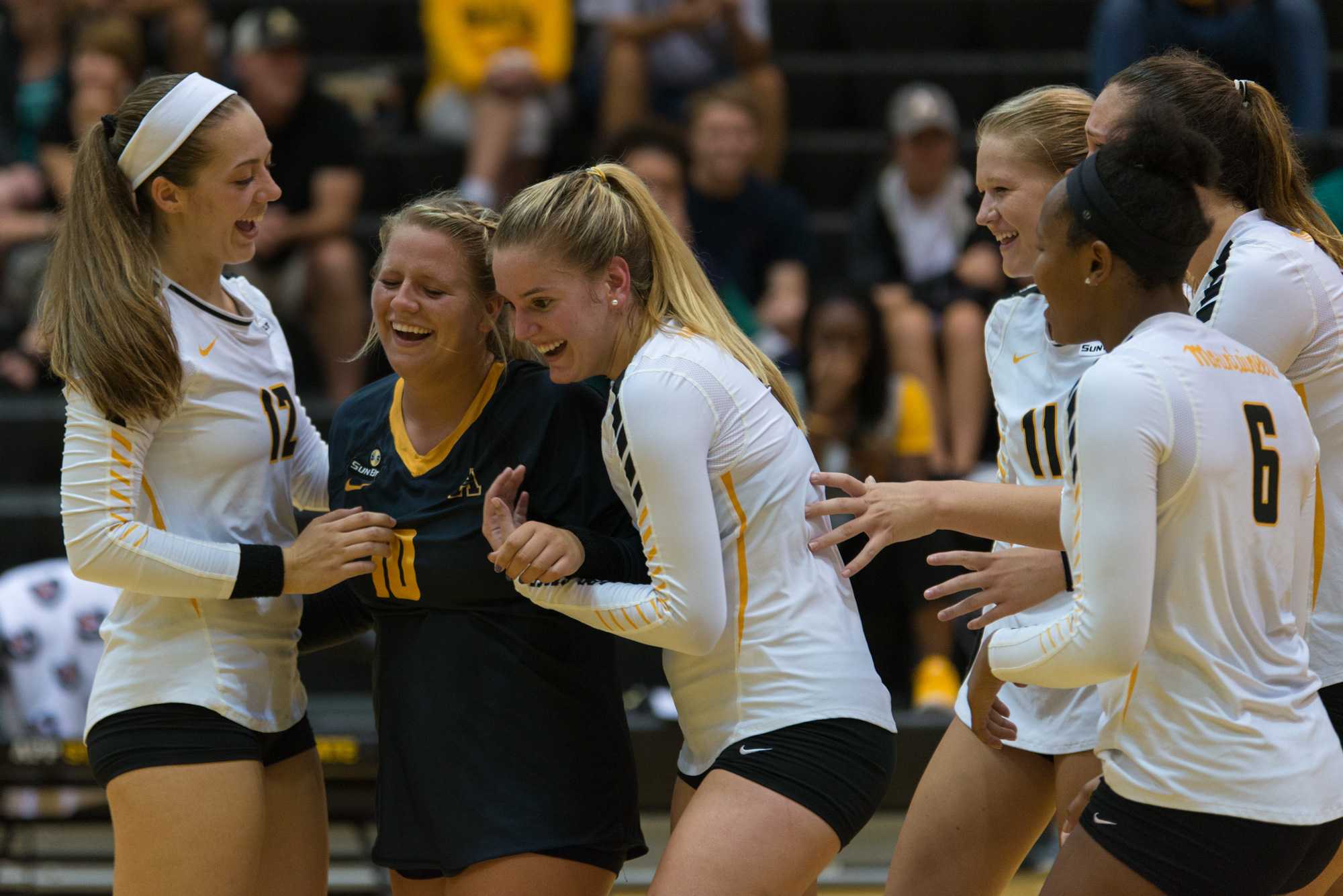 Libero/Defensive Specialist Olivia Loeffler stands up with the help of her teammates after falling and being stepped on during a play. The gold team won 4-0. Photo by Dallas Linger, Photo Editor

The App State volleyball team played their annual Black and Gold preseason intra-squad match on Sunday in preparation for the upcoming season. Many new members of the team saw valuable game time and for some it was their last big opportunity to impress for a starting position this season.

While both sides made their fair share of plays and mistakes, the gold team took home all four sets, with the first three a series of close, intense competition.

The match featured some incredible plays and ball saves but was also plagued with a lack of communication and sloppy play in some areas. But the most important thing on the court was making who will start for the Mountaineers this season a little bit clearer.

Head coach Matt Ginipro was satisfied with how the match progressed. “Except for the fourth set I thought that the scrimmage was really good. They were nice, close sets that we see everyday in practice so it was kind of expected.”

He also acknowledged the communication problem but attributes it to nervousness.

“Again, freshmen,” Ginipro said. “Really this was their first time playing in front of a crowd instead of just each other so I am sure they were a little bit nervous.”

Ginipro will look to players like junior middle blocker Cassidy Stephenson to keep communication up this season. “The kid’s just got a motor and she is nonstop. She just goes, goes, goes and that is why she’s so good. She is always vocal and loves to compete. The biggest thing she wants is for it to be contagious.”

“I get really hype when we play at any time, whether it’s a scrimmage, game, practice, I am always full of energy and ready to go, [but] it helps if you have someone doing it with you because when you’re by yourself it is draining,” Stephenson said after the game.

Junior Olivia Loeffler felt that making the tough plays and creating some easier balls for themselves made the difference for gold.

“We used our serving to keep them out of system so we got a lot of easier balls to come our way,” Loeffler said. “I also think our freshmen stepped up. We handled balls that we needed to handle and let the things that needed to score, score.”

Now with the black and gold exhibition complete, the Mountaineers look towards their first competition of the season as they travel to Virginia for the Virginia Tech Tournament starting on Friday.