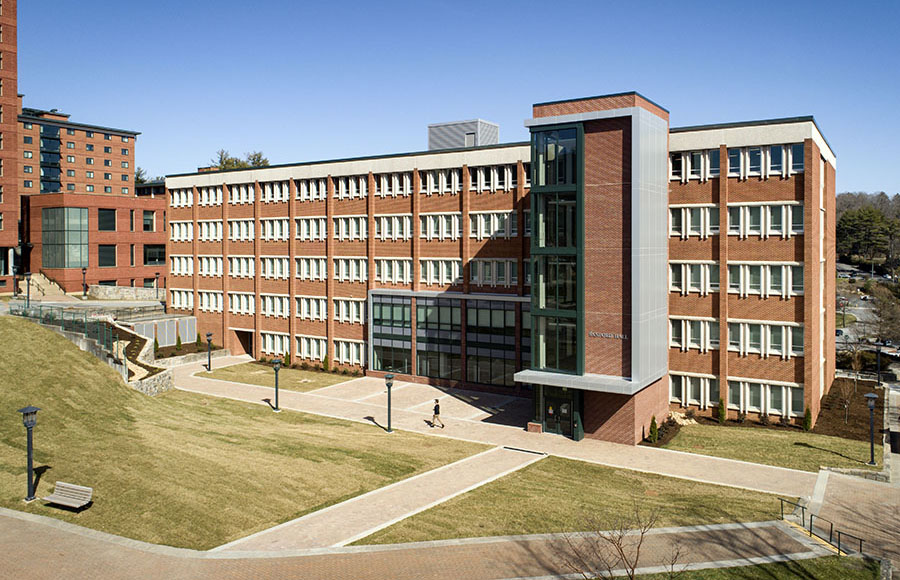 The reopening of Sanford Hall was celebrated on March 25. The elevator column on the front of the building was a centerpiece of the renovation.

Sanford Hall’s dimly lit corridors, hot stuffy classrooms and broken elevator are a thing of the past. The renovation of Sanford Hall is almost complete and the building is open for use.

The building was gutted by Vannoy Construction in July 2019 with only the main pillars which support it and some of the original floors remaining. App State administration and the board of trustees celebrated its reopening on March 25.

The $18 million renovation project included the installation of 450 new panes of glass to conserve energy;  a new double elevator; air conditioning; and the creation of new lecture halls, classrooms and workspaces.

“It has good bones, so a couple years ago we made the decision to invest some money in the renewal of this building,” said Nick Krater, associate vice chancellor for facilities management.

Sanford Hall was built in 1968 as one of the 25 buildings constructed on campus during the period App State transformed from a technical school to a regional university. Prior to the recent renovation, the building was unchanged from its original construction. Now all that is left is some of the terrazzo floors, made of concrete and stone chips.

Sanford Hall is the home of the English department. The pandemic allowed renovations to go forward without interrupting the lives of students and professors, Krater said. The English department’s faculty offices were relocated to Edwin Duncan Hall for the duration of the construction.

The Language, Literature and Cultures department was also located in Sanford Hall but was moved to Lillie Shull Dougherty Hall during the construction. The department will stay there after construction is finished.

The fifth floor, which will be almost entirely offices, is still under construction and will not open until sometime during the summer. Until then, the English department offices will remain in Edwin Duncan Hall.

The new elevator column was a centerpiece of the renovation Krater said. Prior to renovation, the Sanford Hall elevator would often break down and an attendant had to be hired to make sure students did not overload it and cause it to fail.

The building was structurally sound but needed modernization. The renovation is expected to extend the life of Sanford Hall another 30-40 years.

The English department faculty were included in the planning process for the renovation; many opted for blackboards in their classrooms and designed the furniture choices and layouts of their offices.

“When we start a project we try to bring in as many of the stakeholders as possible and, always the actual users are the stakeholders so the English department was very heavily involved,” Krater said.

Donna Lillian, associate english professor, helped organize the move to Edwin Duncan Hall when renovations started. Lillian wrote in an email it took weeks for professors to sort through books, old papers, and supplies that they would be bringing with them to Edwin Duncan Hall.

“Imagine how many books and papers 90 English professors can accumulate!” Lillian said.

Lillian said there is nothing she will miss about the old Sanford Hall and the thing she is looking forward to most about the new version of the building is air conditioning.

“All the mold and mildew and leaky pipes are gone from the building, and everything is clean and fresh and healthy,” Lillian said. “I know this might not sound glamorous, but nothing can be better than having a safe and healthy environment in which to work and learn.”

Most undergraduate students have a class in Sanford Hall at some point in their college career, Hayes said. When in-person classes resume, 4,600 students will use the building each day.

The renovated Sanford Hall has some unique amenities. Film screening rooms, which can be made completely dark, were added as well as enclosed lounge areas for students, similar to library rooms.

Interactive classrooms, which use interactive whiteboard technology and hold fewer students, are also housed in the new and improved Sanford Hall. The goal is to eventually have every classroom interactive, where the professor can share information from their screen to the screens at students’ desks and vice versa, Krater said.

“They’re the classrooms of the future,” Krater said.

The next building scheduled for renovation is Wey Hall, next to the Schaefer Center for Performing Arts. Construction will begin after the Board of Governors appropriates funds.