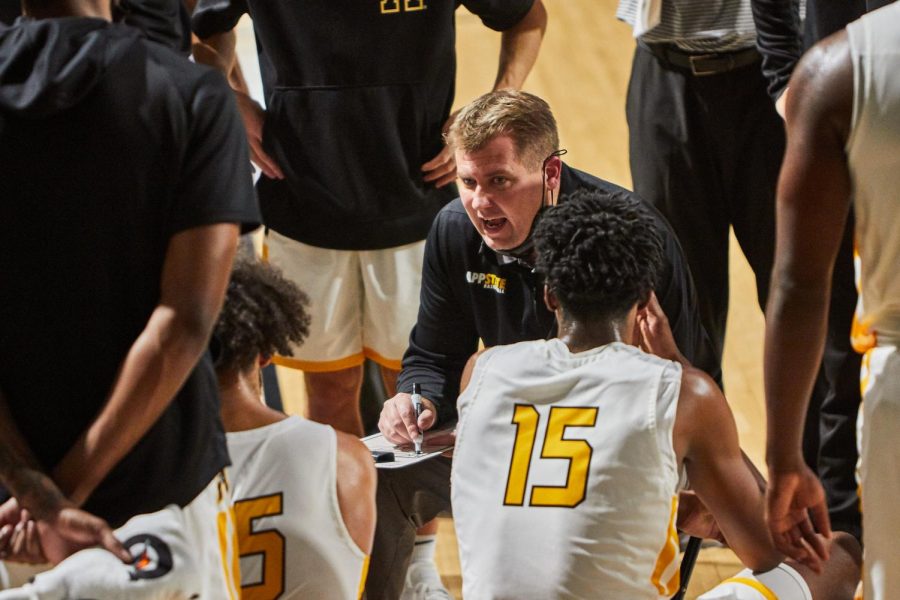 Second-year App State men's basketball head coach Dustin Kerns helped the Mountaineers snap an eight-year losing streak in only his first year on the job a season ago. Now in his second year at the helm, Kerns and the Mountaineers are looking for more.

It was a cloudy, dim, early-November morning in Boone. App State men’s basketball’s preseason practices were underway and beginning to pick up pace. Second-year head coach Dustin Kerns sat swiveling around in his office chair, thoughtfully.

“I think before you win, you have to understand what loses,” he said.

Before Kerns became the 22nd head coach of the Mountaineers in March 2019, App State basketball hadn’t finished a season with a winning record since 2010-11.

Former head coach Jim Fox, who spent five years in Boone, finished with a record of 56-99. Multiple batches of App State alumni never experienced a winning basketball season during their time in college. Mountaineers fans learned to put more hope into the football and wrestling programs. They often paid more attention to their favorite ACC schools during basketball season anyway.

In 2018-19, the Mountaineers followed up a hopeful 2017-18 season by opening Sun Belt play with six straight losses en route to an 11-21 overall record. Fox was fired three days after App State’s first-round loss to UL-Monroe in the conference tournament.

In 2019-20, however, things were different. During Kerns’ first year at the helm, he led the Mountaineers to their first winning season as a member of the Sun Belt conference, which App State joined in 2014. The Mountaineers finished at 18-15 overall and 11-9 in the Sun Belt, including a winning record on the road in conference play. Attendance increased by 70%.

Across the board, the program’s growth in one year was evident. But how? What did the new coach do? How was such a drastic turnaround possible in just one season?

He said there wasn’t one simple answer: everything he does and every decision he makes about the program is calculated, but it started with establishing the mindset that he wants to build the culture around for years to come.

“I don’t want people to feel like it wasn’t difficult to do it. I mean it was very, very difficult to change the mindset of the players in the locker room. Schemes and all that, yeah, OK. Changing the mindset and belief is the hardest part,” Kerns said. “That takes time. It doesn’t happen overnight, but good days add up.”

He said taking a daily approach made the positive growth the program has shown since his arrival possible.

“I don’t want to say ‘fight,’ because I don’t think our players resisted,” he said. “Everybody wants to win until they start realizing what goes into it. It was a daily conflict to establish what wins and what loses. I think that’s probably easier than getting into the details, because it was a lot of stuff.”

Kerns and his staff placed a high value on establishing a winning culture at Presbyterian College, and they’ve worked hard to build that at App State as well. Kerns brought all three of his assistants at Presbyterian with him to App State.

“His attention to the culture, and the amount of time that we put into culture building, is a big piece that goes to us being successful on the court,” assistant coach Frank Young said. “He always says ‘If we’re not right off the court, there’s no way we’ll be right on the court.’”

Growing up in a “basketball family” in Kingsport, Tennessee and playing for Dobyns-Bennett High School, Kerns developed his love for the game early on. His time at Dobyns-Bennett helped solidify his love for winning, as Kerns said they have the most all-time wins out of all high schools in the nation with over 2,000.

From there, Kerns went on to Clemson University, where he worked as a student assistant with the basketball team.

“One day, I walked into the Clemson offices and one of the coaches said ‘Hey, you’re going out to California to work Michael Jordan’s flight school,’ and I said, ‘I’ve never been west of Nashville,” Kerns said.

He coached at the camp for three summers, working with basketball minds such as Andre Igoudala and Jay Williams. Kerns was there when a high school senior named LeBron James played at the camp. While in California, he also met with legendary UCLA coach John Wooden.

After graduating from Clemson in 2002, Kerns spent a year as Tennessee Tech’s director of basketball operations before joining Buzz Peterson’s staff at Tennessee as a graduate assistant the next year. From 2004-17, Kerns honed his coaching skills by spending time on staff at Wofford and Santa Clara before taking the head job at Presbyterian in 2017.

Taking over a team that had won just five games in the season before his arrival, he led the Blue Hose to their first season with more than 20 wins since elevating to Division I in 2007, in the 2018-19 season. Then, Kerns helped snap an eight-year losing streak at App State in his first year on the job.

“From a first year standpoint, (I) couldn’t be more proud and happier for not only Dustin, but our entire men’s basketball program,” App State Director of Athletics Doug Gillin said. “He’s done everything we’ve asked him and more, and I’m really excited about the future of Appalachian men’s basketball.”

Just like how Kerns says creating the positive growth within a program doesn’t boil down to any set number of specific changes, his assistants say the same thing about what makes his coaching style so effective at turning around programs.

“I think every day he wakes up, his goal is to pull greatness out of individuals in the program, be that staff or players,” assistant coach Bob Szorc said.

While the turnaround of the App State men’s basketball program can’t be accredited to any one specific thing, it was made possible in large part simply because of the person Kerns is and the mindset he brings to everything he does.

“He just really wants the best for Appalachian, not just for the sport of men’s basketball, and not just in the athletic department, but for the entire university,” Gillin said. “So I think that’s another attribute you really don’t see because it’s not on the court. But behind the scenes, he’s just a really good teammate that really wants the best for Appalachian as a whole.”

Although the trajectory of the program is undoubtedly trending upwards, Kerns is far from satisfied.

“I have high standards and expectations to get to,” he said confidently, glancing out across campus through his office window. “I feel like we’re just getting started.”