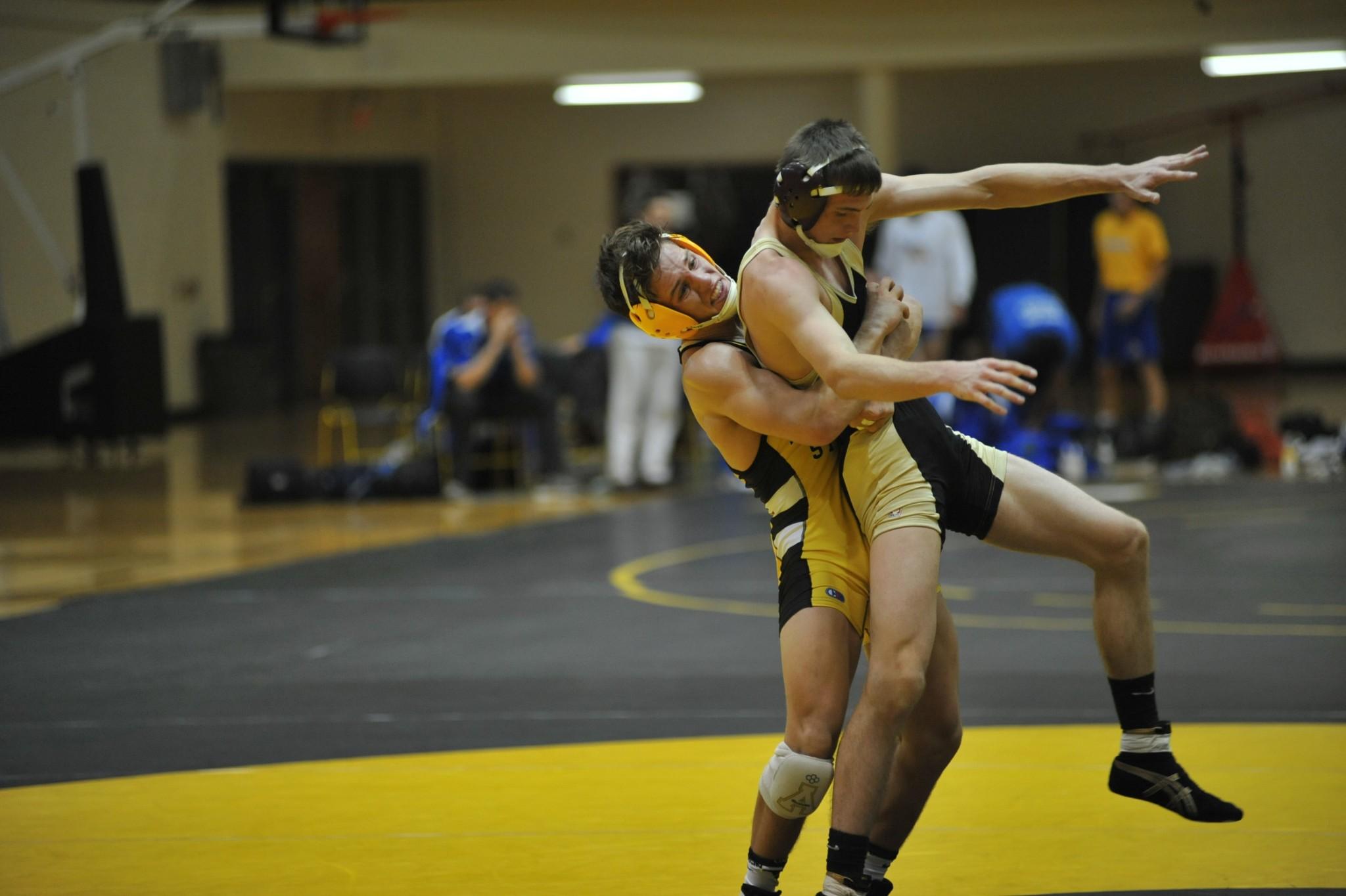 Sophomore Jacob Grigg grapples an opponent during one of three matches on Saturday. The Mountaineers are 3-0 so far this season.

The Appalachian State wrestling team is off to a strong start in the 2015-16 season, going undefeated in their first three matches Saturday, with hopes of achieving a SoCon title and sending a few Mountaineers to the NCAA championship tournament.

Prior to the season, the Mountaineers were tabbed by SoCon coaches to finish second behind conference rival Chattanooga.  The Mountaineers received 40 points overall, five points behind the Mocs.

The Mountaineers have three members on the roster projected to be on the SoCon all-conference team including junior heavyweight Denzel Dejournette (262 lbs.), junior Vito Pasone (125 lbs.) and sophomore Michael Longo (141 lbs.).

Head coach JohnMark Bentley said the team’s primary goal is to win the SoCon, but has big aspirations for the members of the team following the season.

“Our secondary goal is to put guys in the national tournament with the chance to have some All-Americans, and we feel like we have a handful of guys that have a chance this year,” Bentley said. “If we do that, it will put us in the top 20 in the country.”

Dejournette comes into the season ranked ninth nationally, and his views coming in to the season are similar to Bentley’s.

“We want to win conference. We are going to take it one match at a time and our goal is to keep getting better, get to conference, and blow them out of the water,” Dejournette said.

Despite the success so far in his career, Dejournette said he’s spent the offseason perfecting new techniques for the season.

“I’m starting to take more shots other than my under-hook because people started catching onto that towards the end of the season,” Dejournette said. “I’m just trying to become more multidimensional.”

The Chattanooga Mocs seem to be on the mind of many, including Longo, who said that the target is on their back this season.

“Our overall goal is to beat Chattanooga and to be conference champions this year. If we can wrestle together as a team we will be very successful,” Longo said.

After an impressive freshman year, Longo also said that he’s spent the offseason improving, but unlike Dejounette, he’s focused on the intangible side of his game.

Longo said he hopes the increased confidence will lead to more victories.

Overall, Bentley believes his team as a whole has made a marked physical improvement from last season.

“Our guys look fit. We look more physical and stronger this year than we did a year ago,” Bentley said.

App State wrestling has high expectations for the 2015-16 season, especially after beginning 3-0, and will look to keep the winning ways going in pursuit of a SoCon championship.