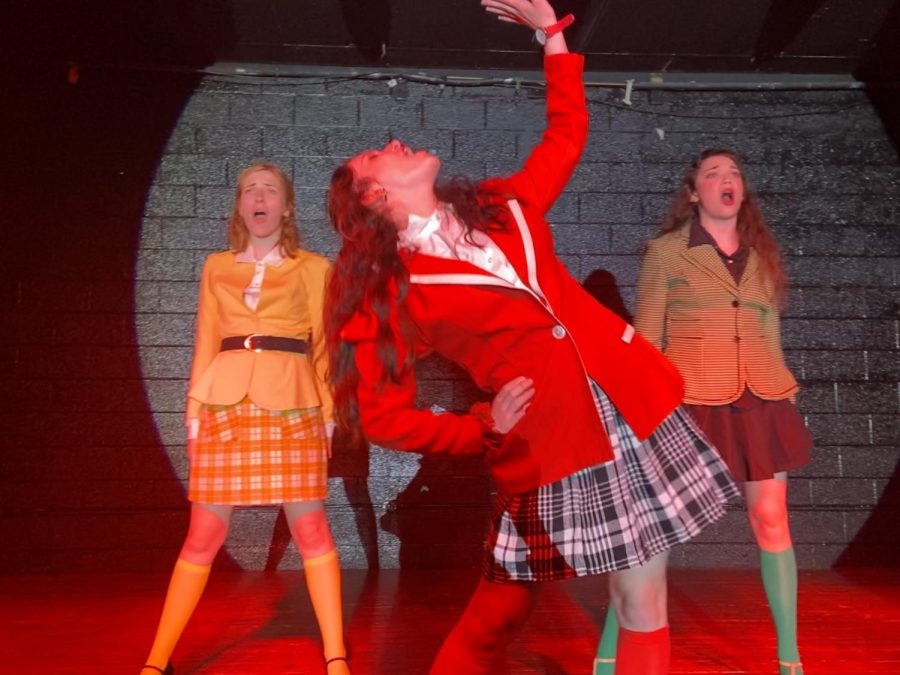 Courtesy of Will Taylor

The Appalachian Musical Theatre Club sold out all three performances of their raunchy and dark comedy production of “Heathers: The Musical” at Legends over the weekend.

The AMTC originally planned to perform “Heathers” in fall 2020; however, they postponed the showings because of COVID-19. Director Will Taylor said that once operations started back in 2021 there wasn’t much thought to continue with “Heathers” until he polled the club to see what musical everyone wanted to do.

Taylor, a junior theater education major, said the club members wanting to perform  “Heathers” was almost unanimous. Taylor said that many people at this academic year’s Club Expo joined just because of their excitement to perform the show.

AMTC performed the show Friday, Saturday and Sunday, totaling more than 900 people in attendance according to Taylor.

“Heathers” is a dark show dealing with a wide variety of difficult societal issues, Taylor said. The musical is adapted from the 1989 movie “Heathers.”

Taylor and his production team said the main hope of performing the show was to  emphasize the conversation of mental health and to dramatize the actions of  characters and highlight the importance of issues addressed.

Cali Lilly, the choreographer, said there is a fine line to walk with the show and the main struggle is shining a light on themes without seeming like the cast is making fun of them.

“There are some characters that do really horrible things in the show. We need to make fun of the people who do these things and not make light of the issues themselves,” said Lilly, a senior theater major.

In order to get the most out of the performers and also make sure everyone was comfortable with the content, the production teams would do daily intimacy and boundary checks-ins with the actors, said Chloe Zwilling, a senior theater major.

In addition to the daily check-ins, the cast found other ways to keep things light when the going got tough. Zwilling said there was competition between the men and women to see who learned their music part first.

On top of the heavy content in the show, the cast also fought cramped rehearsal settings. For the entirety of their practice time since January, the cast held them inside classrooms. Cast members lost time because during practice, they moved chairs and desks out of the rooms they used, Taylor said.

The first time the cast rehearsed on stage was opening week. Zwilling said rehearsal was mainly to work through the tech of the show, and following rehearsal, the cast was not allowed back in until the opening show on Friday.

Taylor said these trials speak to the success of the student-led organization. The students within the organization did everything involving the show without the help of faculty.

Zwilling said the cast showed up every day with enthusiasm, professionalism and they “hit it out of the park every single time.”

Lily Breitinger, a freshman political science major, went to see the show twice. They said the show was amazing and their favorite part was the actor, Lacey Ballard, who played Martha and their “amazing” singing.

“I am very proud as their music director to see how much they have grown,” Zwilling said. “They are the best.”

Zwilling said the room ATC met in for the first time was too small for the amount of people at their first club meeting. Most of the people from that meeting are still a part of the organization, Taylor said.

The first time all the performers ran through the show, Taylor said he and his production team looked at each other and all the memories of the creation process rushed over him.

“Seeing it all come together was amazing, and it is something that I am going to cherish for the rest of my life,” Taylor said.