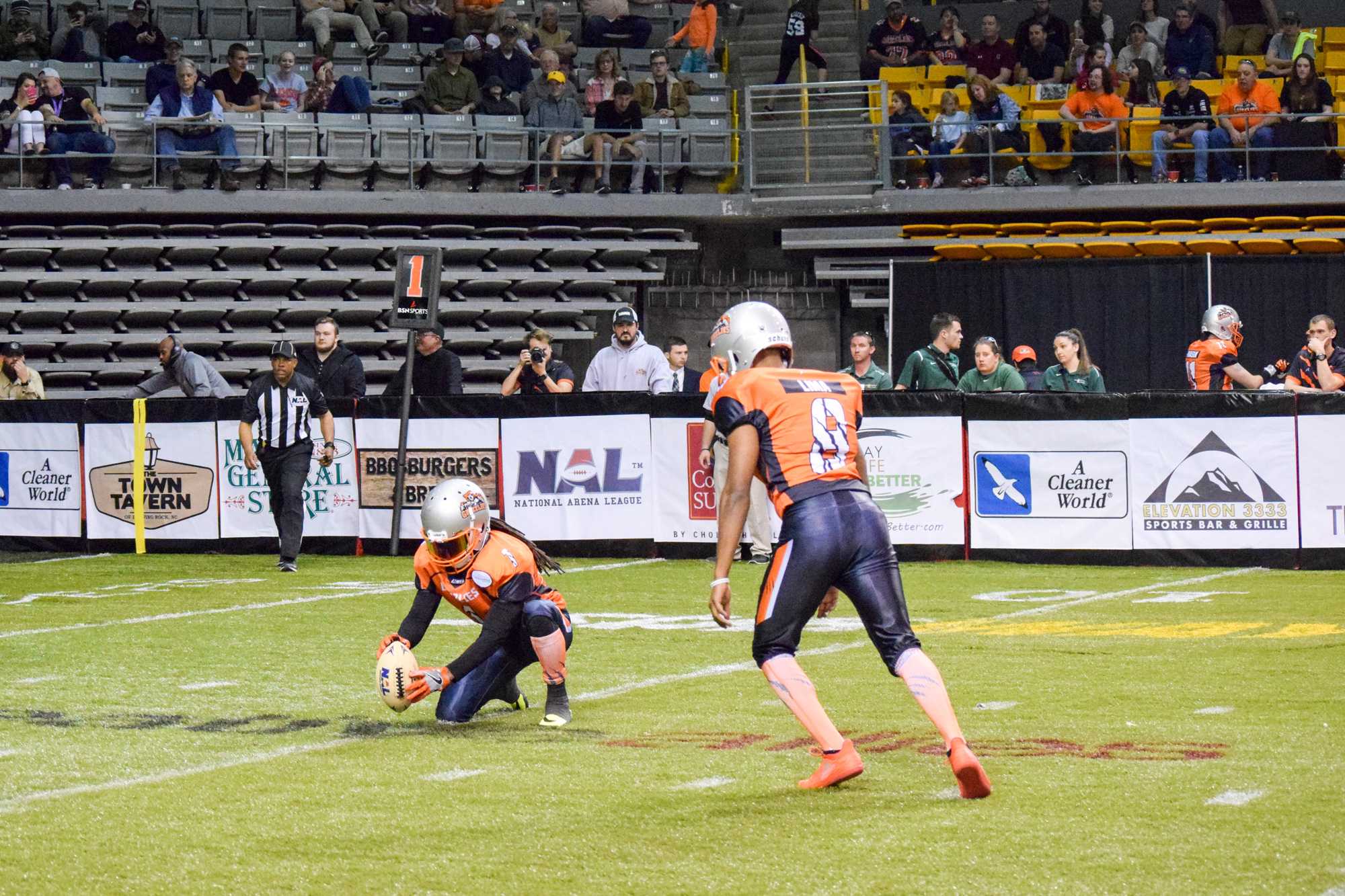 Michael Lima kicking an extra point for the Grizzlies. The Grizzlies are an indoor football team.

In the team’s first ever home game, the High Country Grizzlies fell to the Lehigh Valley Steelhawks in the Holmes Center. The Grizzlies lost a nail-biter 42-48, but there were multiple positives to take from the week two loss. However, being a loss, there were also things that need to be fixed before the Grizzlies’ next game against the Dayton Wolfpack.

The Grizzlies offense showed in week one that they can be a force to be reckoned with, that powerful offense was beneficial in their comeback attempts and it helped them stay in the game up until the last second.

Even though it was a loss, it was a good showing from the team in their first ever home game. They played well, put on an exciting show, and the High Country reacted rather well to the new organization.

While the Holmes Center may not have been sold out, the beginnings of a sea of orange in the crowd could be spotted as many people were already decked out in Grizzlies gear. Touchdowns and big plays were answered with a deafening roar. The room shook when former Mountaineers Malachi Jones and Dexter Jackson were introduced, and nearly exploded when they caught their first passes in their return to Boone.

Pro football has arrived in the High Country. Yes, it started with a heartbreaking loss, but it almost doesn’t matter considering the warm embrace the team has gotten from the community, the amount of fun that is arena football and the history that went on in the Holmes Center.

The heartbreaking loss almost doesn’t matter. There are eight teams in the National Arena League (NAL), and only 11 games in the Grizzlies’ season. There is not a lot of room for error if the Grizzlies want to see post-season play as a top four team. On top of that, it’s the home opener in the first season, you want to start off with a win.

To win the football war, you must win the turnover battle. The Grizzlies struggled with turnovers throughout the game. After quarterback Steve Panasuk’s NAL Offensive Player of the Week award in week one, it was shocking to see him throw three interceptions when the Grizzlies were trying to mount comebacks. Side note, all three were to the Steelhawks’ Eddie Davis III, who now has six interceptions in only two games.

Having to come back from double-digit deficits twice in a single game means the Grizzlies have some adjustments to make before next week’s game. The multiple turnovers from the offense and the defense standing up to, but not stopping, the highest scoring team of week one is not a combination that leads to wins.

Looking ahead:
The Grizzlies will host the Dayton Wolfpack on April 1, hoping to get their first home win of the season and avoid the start of a losing streak. The Wolfpack will be working on a short week after playing the Monterrey Steel on Monday, hoping to bounce back after a week one trouncing by the Steelhawks.