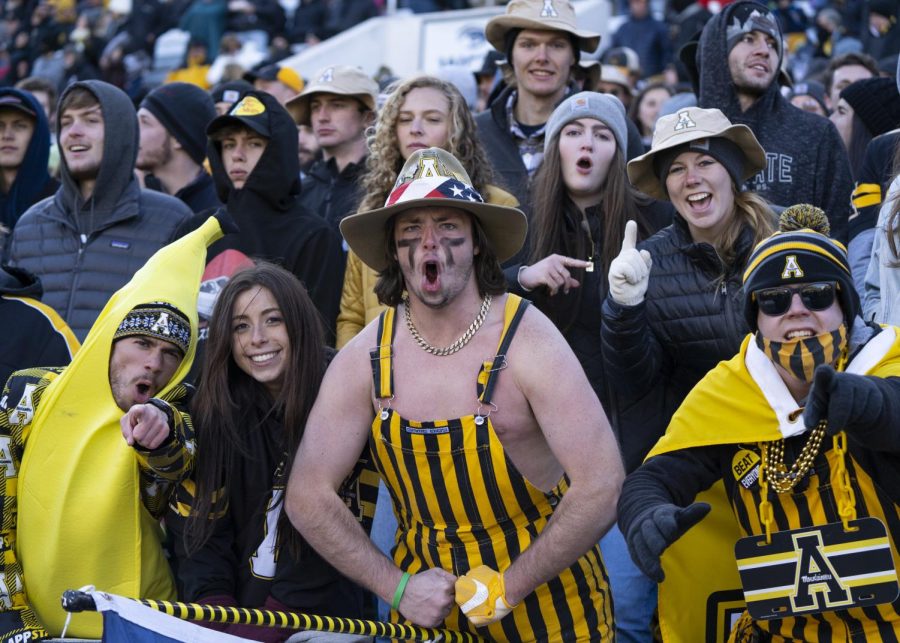 Mountaineer fans show their support during a 31-7 victory over South Alabama Nov. 13, 2021. App State is expecting a record crowd at Kidd Brewer Stadium for the 2022 season opener versus North Carolina.

App State football welcomes North Carolina to Boone Saturday, and according to head coach Shawn Clark, the university is expecting a record-breaking 40,000-plus fans to attend the event.

“This will be the biggest event in the history of Boone, North Carolina,” director of athletics Doug Gillin said. “We’ve been working for many months to make it an enjoyable experience for all visitors to The Rock.”

The influx of tens of thousands of fans in Boone will jampack the town more than ever before, and getting around could be a challenge if you’re not prepared. Here’s what you need to know to navigate the big day in Boone:

Those with vehicles parked at any restricted lots are encouraged to move their vehicles Friday before the day of the game. The following lots are available for all parking Saturday:

AppalCart will be running game day routes Saturday, transporting fans to areas near Kidd Brewer Stadium. According to the AppalCart website, buses will begin running at 8 a.m. Saturday. The Purple, Orange, Express and State Farm routes begin running four hours prior to kickoff and stop running two hours after the game ends.

With gates opening at 9 a.m. for the earliest entry group, tailgating will start early in the morning. Student rumblings report tailgates will begin at 6 a.m. or even earlier, but general consensus reports tailgating lots will be in full swing by 8 a.m. Peacock Lot, Rivers Street Parking Deck and the College Street/Library Parking Deck are some of the more popular tailgating lots across campus.

Kidd Brewer Stadium opens its West Gate at 9 a.m. for students with Student Yosef Club tickets. Gates open at 9:30 a.m. for all other students, and the general public will be admitted into the stadium at 10 a.m. The highly-anticipated in-state matchup has been sold out since July, so fans shouldn’t underestimate how early others will arrive. Fans desiring the best seats possible for viewing the game need to arrive early and wait in line well before gates open.

“Personally, I’ve heard people saying they’re going to camp out as well as be there at 5 – 6 a.m.,” Student Yosef Club President Bailey Lang said. “For most people, I’d recommend getting there at 7 – 8 a.m., if not, sometime before 9. Definitely want to be there before the gates open.”

Last year, students with SYC tickets were required to display a sticker to enter Kidd Brewer Stadium early. This season, SYC members receive pink tickets to differentiate their game day status from other students. The sticker will not be required for game day admission for any games this season, but members will still likely receive their sticker later this month to be used for other purposes such as discounts.

Saturday projects to be partly cloudy with a 19% chance of rain. Fans should also be wary of potential sunburn with a UV Index at an eight out of 10.

The average college football game lasts three hours and 24 minutes, according to NCAA statistics. With a noon kickoff, expect the game to run until around 3:30 p.m.

Lastly, knowing the chants is always important at college football games. Both fan bases have similar go-to chants, and a competition for which chant is the loudest is sure to break out during the game. For App State fans, one half of the stadium will chant “App!” while the other will respond “State!” North Carolina fans perform the same chant, but with “Tar!” and “Heels!”