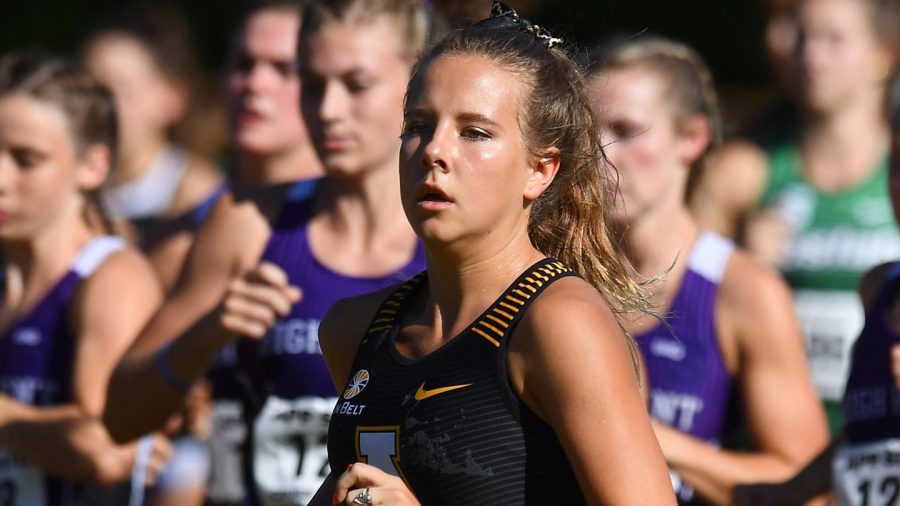 Izzy Evely was named the Sun Belt Women's Runner of the Week earlier this month. The cross country team has their next race Friday, Aug. 20 at the Don Kennedy Trails at State Farm.

The men’s and women’s cross country teams at App State embrace the challenge of pushing themselves to their absolute limits, day in and day out.

“Because it is such a demanding sport physically, mentally, and spiritually, you have to be all in,” sophomore Izzy Evely said via email. “We run every day, we have weights on Monday and Thursday, core at 6:30 a.m. Wednesday, cross train at 7 a.m. Thursday, tempos on Tuesdays and Thursdays, and long runs Sunday. I run 50-60 miles a week.”

The constant hard work paid off in the team’s season-opening race, the Covered Bridge Open, in Boone Aug. 30.

The men’s team took second place out of nine teams after six of the Mountaineers finished in the top 21. Junior Isaac Benz led the way with a second place finish and a personal-record time of 25:06.28 in the 8K. Florida State took first place in the race.

“We thought we had a shot at sneaking past FSU this year but I think our guys surprised them a bit when the last mile came around our guys were right there mixing it up with one of the top teams in the South,” head coach Michael Curcio said via email.

The women’s team finished fourth out of nine teams. Evely led the way with a seventh place finish and a time of 18:25.89 in the 5K. Florida State finished first, followed by East Carolina and High Point.

Due to a course malfunction, the women’s race was actually 5,200m instead of the normal 5,000m.

“With the conversion, my 5k would have been 17:42 which is a PR for me,” Evely said via email. “It’s gratifying knowing my summer training is paying off, and I firmly believe (that) hard work always pays off. I wanted to give Florida State a run for their money and have a strong finish, so I was happy with that.’

Overall, Curcio was pleased with the performance the women’s team turned in despite dealing with some injuries.

“A few of our ladies had some training setbacks so we held out three from the first meet. The ladies who did compete, did extremely well against some very talented teams,” Curcio said via email. “I  am very happy with the way they performed.”

Both Benz and Evely were named the Sun Belt Conference Cross Country Runners of the Week for their performances in the Covered Bridge Open. That marks the fifth time since joining the Sun Belt in 2014 that App State runners have won both awards in the same week, according to AppStateSports.com.

Evely was named the Sun Belt Freshman of the Year and was named to the first team all-conference squad in 2018. The Cornelius native is set to improve off of her early success from a season ago.

“The (women’s) team lost a lot of depth last year as four of our top seven graduated, but I see a lot of potential and growth in the younger runners,” Evely said via email. “I am very excited to see everyone improve and grow stronger.”

Benz is in his second year with the Mountaineers after spending his freshman year at the University of South Dakota.

Most people probably don’t think of cross country when they think of successful App State sports, but that could only be due to lack of knowledge of the teams success, not an actual lack of success.

The women’s team won Sun Belt titles in 2016 and 2018 and won 10 conference championships while a member of the Southern Conference.

“It was amazing. I really wanted to come in and help my team out right off the bat, and I was able to do so,” Evely said via email. “Those accomplishments from Freshman year were the catalysts to my confidence at Appalachian State and gave me momentum to continue giving my all every day.”

The men’s team captured its first Sun Belt Championship in 2017 and won 15 SoCon championships, including six straight from 2005-10.

“That run of six conference titles  in a row was very special. We had a lot of young men that really wanted to be part of the streak and didn’t want to be the ones to let the other teams  down,” head coach Michael Curcio said via email. “When we did lose, it took UNC Greensboro and four very talented Kenyans to do it. UNC-G’s top athlete, Paul Chelimo, ended up becoming an American citizen and went on to win a silver medal at the (2016 Rio de Janeiro) olympics in the 5000m. We beat them the next year for 7 wins in 8 years ”

“We certainly see a promising season coming along,” Curcio said via email.

Both the mens and womens teams will be in action next on Sept. 20, when the Mountaineers host the Mountains to Sea Open at 5 p.m. at the Don Kennedy Trails at the State Farm complex in Boone.