Hartman’s path to the MLB Draft 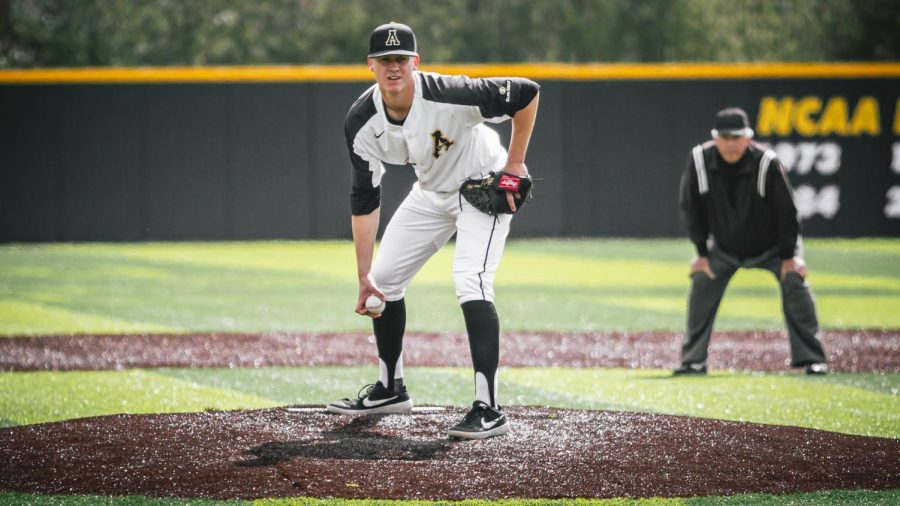 Former App State pitcher Jack Hartman signed with the Pittsburgh Pirates on Monday, June 29. He was drafted 108th overall in the fourth round of this year's MLB Draft.

App State pitcher Jack Hartman made history when he was picked 108th in this year’s MLB draft by the Pittsburgh Pirates.

He became the fourth-highest pick in App State history and the highest pick the Mountaineers have had since 1986. He was the second college senior picked in this year’s draft and the second-highest player picked from the Sun Belt Conference.

Not to mention, this year’s draft was shortened from 40 rounds to 5 rounds due to the outbreak of COVID-19, making him one of just 160 prospects taken this year. In a regular 40 round draft, over 1,200 prospects are selected.

Despite all of this, Hartman’s journey that led him to getting drafted may be more impressive than this history he’s made.

“It keeps me more consistent, I realize that things sometimes happen literally for a reason, it’s so cliche but you kind of have to accept it,” Hartman said. “Keep going and trust your process, again another cliche, but literally just trust what you do and if it didn’t work out that’s just unfortunate, but it keeps me sane.”

Hartman’s baseball journey started in the suburbs of Detroit where he began playing T-ball at 3 years old. He eventually moved to Georgia and, as a high schooler, a variety of power five schools recruited him as an infielder, but unfortunately backed away after his lack of progression his junior year.

“Schools started to abandon me and it really sucked,” Hartman said. “They just didn’t like my actions in the infield, but people still saw potential so I ended up going to junior college.”

Tallahassee Community College was Hartman’s choice, and in 2017 he batted .267 with 34 RBI’s as an infielder. But despite these solid numbers, Hartman found himself transferring out of TCC after the season.

“Tallahassee was not a great experience for me,” Hartman said. “I struggled to find out who I was as a player, a lot of back and forth with the coach there and I could tell you a lot of stories. But I just didn’t have a great time there with the school, and the town, and the people, and it just wasn’t my fit.”

His next stop was Dothan, Alabama, where he attended Wallace Community College, but not for long. Hartman described his experience there as “brutal” and similar to the one in Tallahassee, so he transferred after the fall semester before baseball season even began.

In a year and a half, Hartman made many changes to his game from a performance standpoint, but with no success. This plus the negative environments he was surrounded by almost led him to quitting baseball entirely.

“I almost gave it up, and I’m glad I didn’t, but it was almost me giving up on the dream, which would’ve been a really bad decision looking back,” Hartman said.

Just one month after almost walking away from the game he loved, Hartman gave his dream one more chance when he tried out for the College of Central Florida’s baseball team. They didn’t offer him initially, but in a last-ditch effort to earn a scholarship, he did something that would change the trajectory of his career: he got on the mound and pitched.

“I had a couple ‘get me over’ innings in high school and I pitched two to four (innings) my whole four years in high school, just screw-around innings, really,” Hartman said.

Despite his lack of pitching experience, CCF’s coaches saw potential in him and offered him a scholarship; and in the middle of their spring season Hartman made his first appearance on the mound.

In 22 innings, Hartman went 2-0 with 14 strikeouts, and other colleges started to see his potential as well. After a video of him pitching surfaced across the recruiting world, Hartman received around 20 offers in just one week.  From those offers, Hartman chose to attend Appalachian State.

App State is where Hartman took a leap as a pitcher, evolving from having a lot of potential to being a real threat to hitters when he was on the mound. He worked with multiple coaches and trainers in the offseason to assess his pitching, refine his body movement, and increase his strength, mobility and stability as a pitcher. Hartman also worked with App State’s sport psychologist, Dr. Jacob Cooper, to refine the mental part of his game.

“I think baseball is extremely mental, on the mound at least,” Hartman said. “I started working with him in the fall as well, and he kind of opened up that toolbox for me of how to be more mentally strong.”

In his first season at App, Hartman’s off-season work ethic paid off, establishing himself as an effective pitcher, posting an ERA of 4.98 with 26 strikeouts in 21.2 innings. In 2020, he built off of this: in the first 17 games, Hartman pitched 12 innings with an ERA of 3.00. He also tied the team high with 22 strikeouts, three of which were in the last inning in an upset win at No. 24  Wake Forest.

But unfortunately, due to the outbreak of COVID-19, all spring sports including baseball were canceled, ending Hartman’s senior season early and unexpectedly.

Hartman quickly had to decide what to do with his future: he ranked in the top 300 on multiple MLB prospect lists. But, with the draft shortening from 40 rounds and over 1,000 picks to five rounds and just 160 picks, he weighed out all his options.

“There were a lot of different variables that nobody has dealt with before, so the best way to describe it was a blurry, confusing time,” Hartman said. “And especially with the state of the country, I didn’t really know what was going on.”

Hartman’s vision was blurred by many things; the frustration of having his final season cut short, the self-doubt of potentially not getting drafted, the conflict of possibly signing as a free agent or coming back to App State for another season (since the NCAA granted spring athletes another year of eligibility).

These were tough times for Hartman, but adversity was nothing new to him, and on June 11 his blurry vision would get a lot clearer.

While on a beach vacation with his girlfriend, Hartman glued himself to the TV for day two of the MLB draft. And after a few hours, he got a call from his advisor saying the Pittsburgh Pirates wanted to select him with the 108th pick of the draft. After discussing the details of his contract Hartman said “let’s do it,” and moments later, his name appeared on the TV confirming that his dream was coming true.

Not too bad for a kid that had only been pitching for two and a half years.

“I told my parents this when I got drafted: it was pretty exciting, but the next day it didn’t feel very real, I was at the beach and was like ‘this doesn’t seem right,’” Hartman said.

A couple weeks later, it felt more real for Hartman when he visited his new home field, PNC Park in Pittsburgh, to sign with the Pirates.

“They rolled the red carpet out, it was awesome,” Hartman said. “I was able to go sign in the office at the field, got to do a tour after I signed and they were just really great people that really took care of me and my dad real well,” Hartman said.

From being abandoned by college coaches in high school, or attending four different colleges in four years, or switching to pitcher after 15 years of playing shortstop; Hartman’s journey to becoming an MLB player was far from easy, and many times even looked impossible.

“I realize now that nothing can really surprise me and nothing’s really going to get me too upset in the large picture, because I’ve already dealt with so much and other people have dealt with way more,” Hartman said. “So there’s nothing that’s really gonna stop me from keeping on going.”