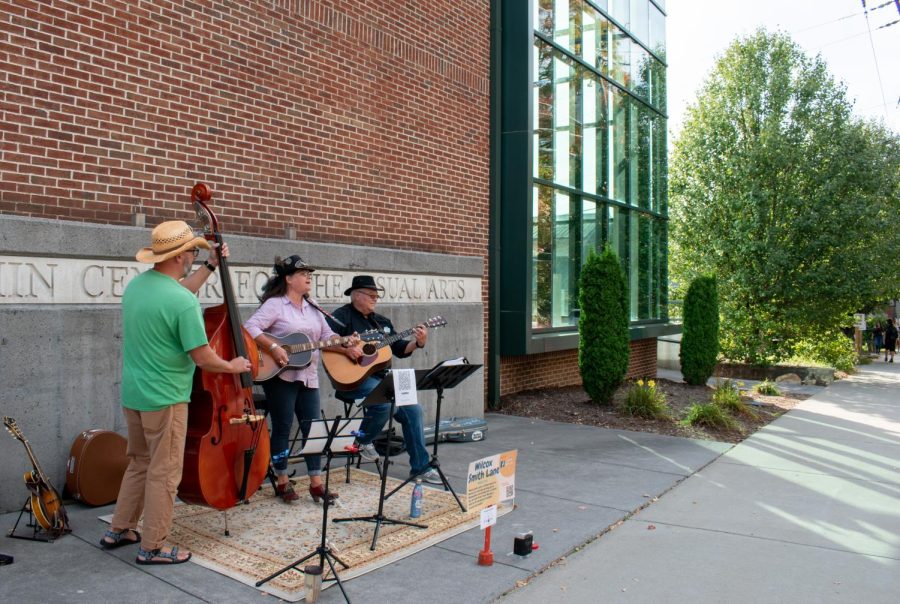 The loud sounds of cars and people hustling around Boone can be heard nonstop on King Street any given day of the week. But for a few hours Friday, the stressful noises were replaced by easy-going tunes from an array of live musicians and cheerful chatter from those walking by.

Buskers Fest, put on by the Watauga Arts Council in partnership with the Downtown Boone Development Association and the Jones House, hosted a range of street performances and art exhibitions sprinkled across King Street from 5 p.m. – 8 p.m. A busker is someone who performs in a public place for tips or donations.

Anna Buckner, who works for the Watauga Arts Council, said they thought it would be a good way to get people out and together in a COVID-19 safe way.

“This is our first ever Buskers Festival. We’re really excited about it,” Buckner said. “There’s all kinds of people here — musicians, artists, everything.”

The first Friday of every month is already an exciting setting for Downtown Boone, where the town hosts Art Crawls, which allow various artists to show off and sell their work. This first Friday, Buskers Fest added an extra level of entertainment for the area.

Many businesses on King Street participated in the festival as well. Hands Gallery hosted a clay demonstration, Foggy Pine Books held an artist market and the Turchin Center stayed open late with live music right outside their building.

Settled right outside the Turchin Center was Wilcox Smith Lane, a Boone-based music trio. Each participating performer of Buskers Fest had a sign displaying their information. According to the one in front of Wilcox Smith Lane’s set up, when the trio met they bonded over “a common love for John Prine’s music.”

Wilcox Smith Lane playing outside of the Turchin Center. The group typically plays acoustic americana “and then some.” pic.twitter.com/IAwXuHUQu6

The festival also held a silent auction and a raffle. App State juniors Charlotte Marcellus and Allie Barker got involved with the Watauga Arts Council and the Buskers Fest raffle for a project in their fundraising class.

The raffle included prizes valued up to $600, with items such as gift baskets from Foggy Pine Books and gift cards from Anna Banana’s, Melanie’s and Dan’l Boone Inn.

East Tennessee State University graduate Ashley Whitmire set up her booth in front of Melanie’s. With an array of watercolor portraits spread over a white-clothed table, Whitmire, who recently went full-time with her art business in Boone, participated in her first ever Friday Art Crawl.

“I love doing watercolor home portraits,” Whitmire said. “I do just about any building or landscape, but I really love capturing other people’s childhood homes or places that mean the most to them.”

In front of Common Good Co. was App State senior studio art major Ashley Durard. Sitting at an easel, Durard was painting peacefully amid the loud and lively scene of the festival.

“I’m working on my senior show. It’s all about femininity and then looking at femininity through this lens of fruits and eggs and cool stuff like that,” Durard said. “So I’m really just painting some peaches right now.”

Across the street on the front lawn of the Jones House, hula hoops spinned through the air, and aerial silks molded to the body of a gymnast dangling from its grip.

Inspiral Fire Tribe, a fire performance group out of Boone, entertained with all sorts of props, from hula hoops to poi. The group usually performs at Ransom every Wednesday, and this was their first time at a Friday Art Crawl, which they were “really excited about,” group member Madeline Cohen said.

Inspiral Fire Tribe outside of the Jones House. pic.twitter.com/Kqx5MtC7Bm

As people walked down King Street and stopped to admire the artwork and music, there was one thing that left some people sticking out: hats. From big to small, hats of every size and color were noticeable at Buskers Fest. There was a hat making station set up with an overall appreciation for hats of all kinds, thanks to the Happy Horde, an organization encouraging people to do “more artsy things, just because.”

“It’s just super cool to see all these random people wearing these hats that they made,” said Julya Mirro, one of the founders of Happy Horde.