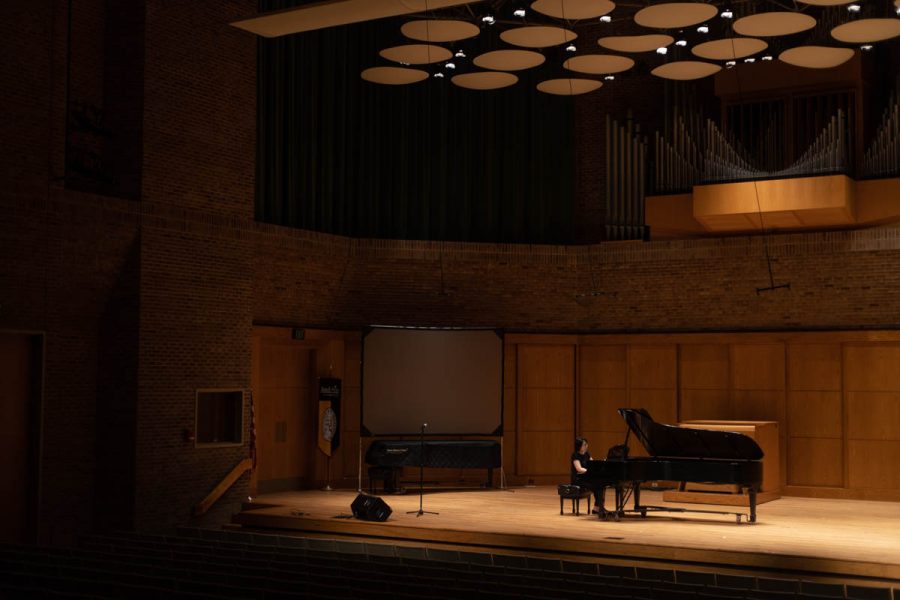 Hiu-Wah Au performs "Romance in A-Flat Major, Op. 11 No. 3" by Clara Schumann on the piano for Hayes School of Music's "Music of Women Composers" concert on March 16. The concert was performed via live-stream for viewers to prevent risk of exposure to COVID-19.

The Hayes School of Music hosted its annual Women Composers Concert Tuesday, featuring the musical works of female composers throughout the decades.

James Douthit, dean of the Hayes School of Music, said the goal of the concert is to expose audiences to a wide range of music by female composers, many whose music has been suppressed. The concert featured composers that ranged from 19th century composer Clara Schumann to contemporary 21st century composer Shona Mackey.

Douthit said the concert is an attempt to give more stage time to the music of women, some of whom have attended App State.

Lindsay Freundlich, who graduated from App State in 2018, said one of her original compositions, titled “Au Naturale,” was featured in the Women Composers Concert in March 2018; she’s the only alumna whose music has been performed at the concert. Freundlich said having her work featured was a “really awesome experience.”

“It gets our work out there when it’s harder for us to feel like our voices are heard,” Freundlich said.

Reeves Shulstad, a music historian at App State, made the Women Composers Concert an annual event in 2011. She wanted to bring those interested in female composed music together in a collaboration between faculty and students.

Shulstad said she came up with the idea to have an annual Women Composers Concert when she noticed there wasn’t a lot of female representation in the composers featured at App State.

“There’s such a history of women being marginalized,” Shulstad said. “Being able to talk about the kinds of things they were up against to get music degrees, to get their music published, to get it out there – I think it’s an important thing to do.”

Shulstad said this concert has also affected students who have performed in it.

“I’ve had several students that, if they had performed in this (concert), then maybe later on their whole recitals were dedicated to women composers,” Shulstad said. “In the past four years, there have been about three or four students who have decided that that’s what they wanted their recitals to be: all-female composers.”

Priscilla Porterfield, a voice professor and director of the treble choir at App State who organized the concert this year, said she thinks female composers get less airtime than male composers, and believes it’s important to give female composers’ music more “exposure to the masses.”

Porterfield said many students who have learned music in preparation for the concert have been surprised by the variety of music by female composers.

Kinsey Crabb, one of Porterfield’s students who performed in the concert, said she appreciates the variety of music the Women Composers Concert offers.

“The Annual Women Composers Concert allows its audience members to experience the diverse selections of women composers throughout history and opens the door to exploring more pieces, composers and selections that otherwise may not have been sought out,” Crabb said.