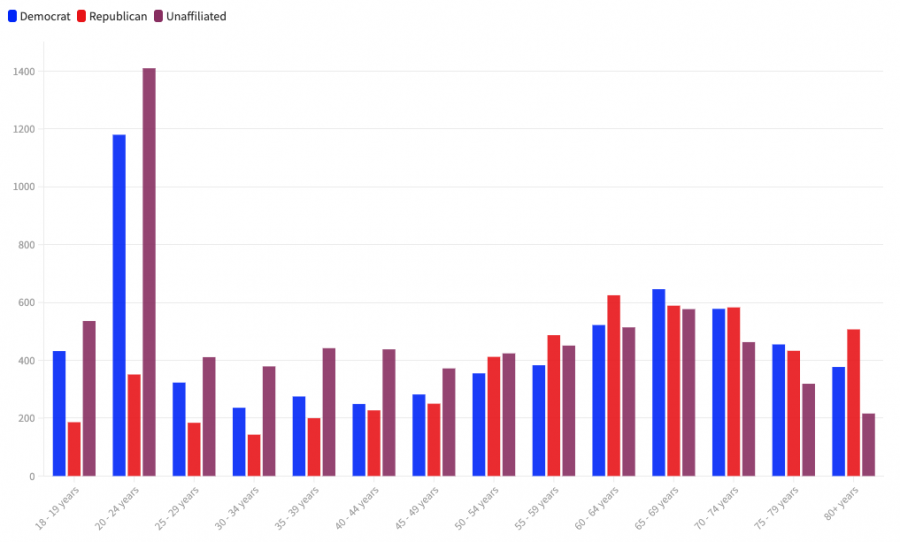 Watauga County is on track to surpass the total votes cast in the 2016 election with just under a week left in early voting.

As of Sunday, Watauga County residents have cast 18,451 ballots. In 2016, residents in the county submitted 30,241 ballots, and 20,932 total ballots processed in the entire early voting period and by absentee vote by mail in Watauga County.

That number is consistent with state turnout, which stands at 42.34% with 3.1 million votes cast so far, as of Sunday.

Democrats are turning out more than Republicans, but unaffiliated voters have the strongest turnout so far.

Here’s who is turning out so far in the county, according to data from VoteTracker — a Civitas Institute project. All data used by the Civitas Institute — a conservative nonprofit based in North Carolina — comes from the state board of elections.

Younger people are turning out in force in Watauga County.

As of Sunday, people between the ages of 18-25 make up just over 23% of the total votes cast in the county. Twenty-year-olds make up the most with 875 votes cast.

Voters between the ages of 65-69 years old have cast just under 10% of the ballots — the second-highest percentage outside of the 18-to-25-year-old age group.

Unaffiliated voters in most age groups have outvoted both parties. In the county, over 130 people who are 90 years old or older have cast votes.

Females lead both parties and unaffiliated voters in turnout this election. Democratic females have turned out the most with nearly 3,500 votes.

Across the state, voter turnout has already surpassed half the total votes in 2016.

Republicans are trailing Democrats in every age group for total votes cast.

The age group with the highest turnout so far is 60-to-75-year-olds. Sixty-three-year-olds have cast the most votes with just over 68,000 ballots cast so far.

Across the state, females have voted the most in the three most popular political parties.

There is less than a week left of early voting in North Carolina. Across the country, the early voting total has already surpassed the 2016 early vote total.

The Associated Press has logged 58.6 million ballots casted so far. In 2016, the AP logged 58 million during the early voting period leading up to election dayIn 2016, over 128.8 million people voted across America in total..