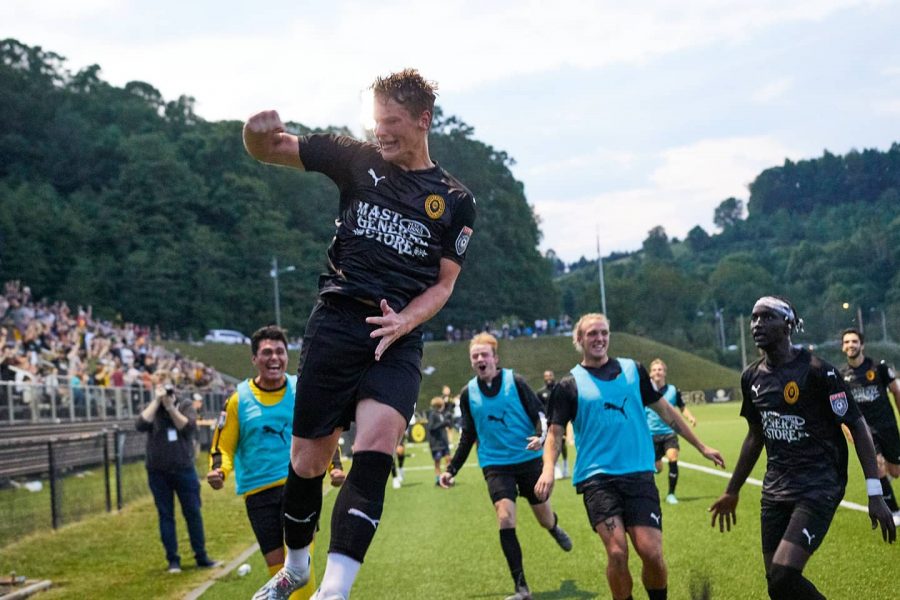 Teammates swarm AFC defender Alexander Render as he leaps into the air after punching in the final goal in the 81st minute. Render's goal put AFC up 3-1 and sealed the victory for the home club.

“It’s an amazing feeling. We’ve been waiting a long time for this,” head coach Dale Parker said. “It’s a big three points. That’s the most important thing and doing it in the way we did in front of the fans, it almost felt like it was worth 100 points.”

AFC began the match conceding two free kicks in the 11th and 13th minutes, but AFC goalkeeper Niclas Wild blocked both shots with a leaping save on the first free kick and punched the ball out toward his defenders to clear the second free kick.

The first half ended scoreless as AFC dominated possession but struggled to get the ball into the net.

AFC forward Angelo Fabricio bounced the ball over a Metro defender and crossed the ball to AFC defender Rashawn Kellman, who headed in a goal in the 69th minute of the second half. The squatchy supporters went wild as the Black and Yellow scored their first ever home goal.

Metro retaliated within the next minute, with Gerardo Alonso scoring off the counter once play resumed. The team attempted to salvage a point, but struggled to get past the well-structured AFC backline.

AFC was on the attack when former App State men’s soccer forward Camden Holbrook’s shot was deflected into the path of AFC defender Alexander Render who scored the winner in the 81st minute.

After getting a 1-1 draw May 1 in their first game at Metro Louisville, Appalachian FC assistant coach Cory Speed said “it felt like the club left the match with three points on the road.”

Speed was full of praise for Louma after his incredible goal: “The second goal was exactly the type of goal we’d like to score with this group … it was a big time finish by Jeremiah,” Speed said.

Louma said it was a well-deserved goal and a confidence booster the team needed. “I felt alive. It’s lovely to finally have a win on our home ground and let the fans enjoy the show,” Louma said. “I just encourage them to continue supporting us, keep on bringing that hype and keep on lifting us. We love the hype and passion.”

It was a historic night at Ted Mackorell for the entire squad, but it was even more special to left back Thieryy Van Den Bergh who also celebrated his birthday.

“Getting the win felt great, everybody worked their a– off, finally we won today. I think everybody is happy, especially me,” Van Den Bergh said. “I think everybody knows each other right now better and better each week, so I think the team and atmosphere is getting better.”

After securing its first victory, AFC moved up to third in the Southeast Conference Division with six points. However, AFC had a doubleheader in Georgia where it drew 0-0 against Georgia Storm SA on June 11, and lost 2-0 against conference leaders Georgia Revolution FC. The Black and Yellow are now fourth in their division, level on points with North Alabama SC in third with seven points.

Appalachian FC’s next home game is Friday, June 18 against North Alabama SC, where it will host three consecutive home games to finish off its season.