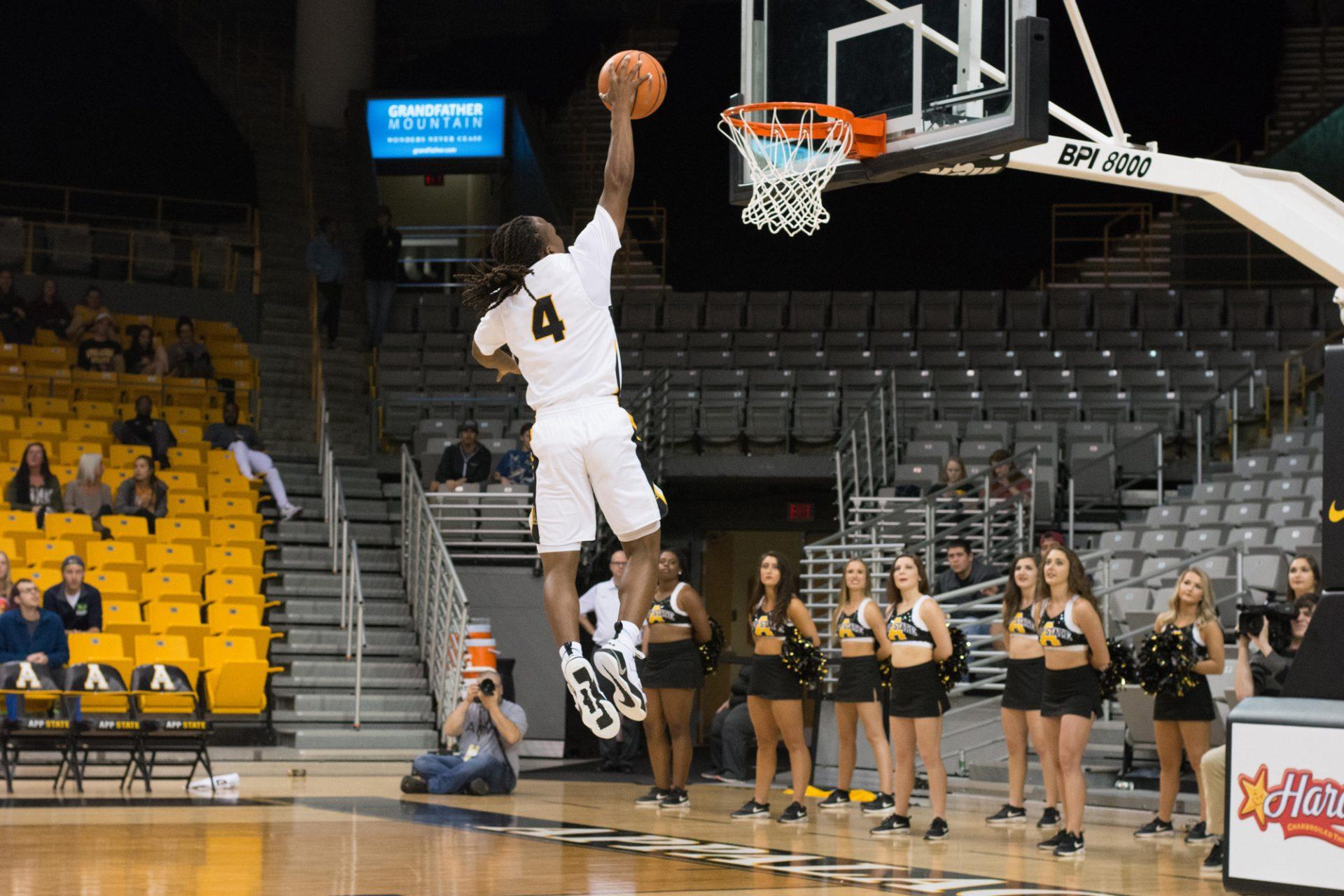 Sophomore Guard O'Showen Williams going up for the dunk against Warren Wilson Owls at the Convocation Center. The Mountaineers won 126-71.

After every men and women’s basketball games, The Appalachian will be breaking down the Mountaineers positions for grades
Game: App State men vs. Warren Wilson (Exhibition)
Final Score: App 126 Warren Wilson 71

Guards: A-
There was a lot of attention on the guards coming into the Warren Wilson exhibition, specifically on sophomore O’Showen Williams and freshman Justin Forrest. Both made their debuts for App State and both played extremely well. Forrest was the floor general, playing strong on both sides of the court; however, he seemed to have a problem handling the ball, giving up six turnovers total. Williams came off the bench in a big way, commanding the floor and finding ways to generate offense whether it was scoring inside, outside, or throwing one of his team high eight assists. Junior Ronshad Shabazz led the team with 23 points and four assists.

Forwards: A
App State owes a lot to their forwards in this game, especially on the defensive side of the ball. Juniors Bennett Holley and Tyrell Johnson both pocketed two blocks and combined for 10 defensive rebounds. Holley had an impressive game in his own right, coming off the bench late in the second half and doing it all on both sides of the court. Johnson led the team in rebounds at 12, including an impressive eight rebounds on the defensive side of the ball. If tonight was any indication for the rest of the season, the forwards are looking like some of the best two way players on the team this year.

Centers: B
Most of Warren Wilson’s offense was centered around shots outside the three-point line, meaning not a lot of action for the big men in the paint. Despite the lack of defensive of attention, senior Griffin Kinney and redshirt junior Jake Wilson split time under the rim and did a good job respectively. While the first half was slow in the rebounding category, App out rebounded Warren Wilson 71-35 and proved the dominate force in the paint. The two also combined for 12 points and three assists, meaning a slow but overall respectable performance from the center position.

Player of the game: O’Showen Williams
Williams came off the bench ready to make an impact on the game. He passed the ball to his teammates, found ways to score himself and was the undeniable floor general for App State. In his debut game for App, Williams showed his versatility as an offensive force and a defensive presence and gave hope to a lot of fans out there about the upcoming season.

Overall team grade: A+
It’s hard to not give an A to a team that set a new program scoring record. App looked strong in their season debut, shared the ball well and played hard-nosed defense. While there seemed to be an issue keeping the ball and a small rebounding problem in the first half, App did a lot of things right. The new additions are fitting in with the veterans and the team seems to play together very well. With the first official game of the season coming up soon, there is a lot to be excited about for Mountaineer basketball fans.