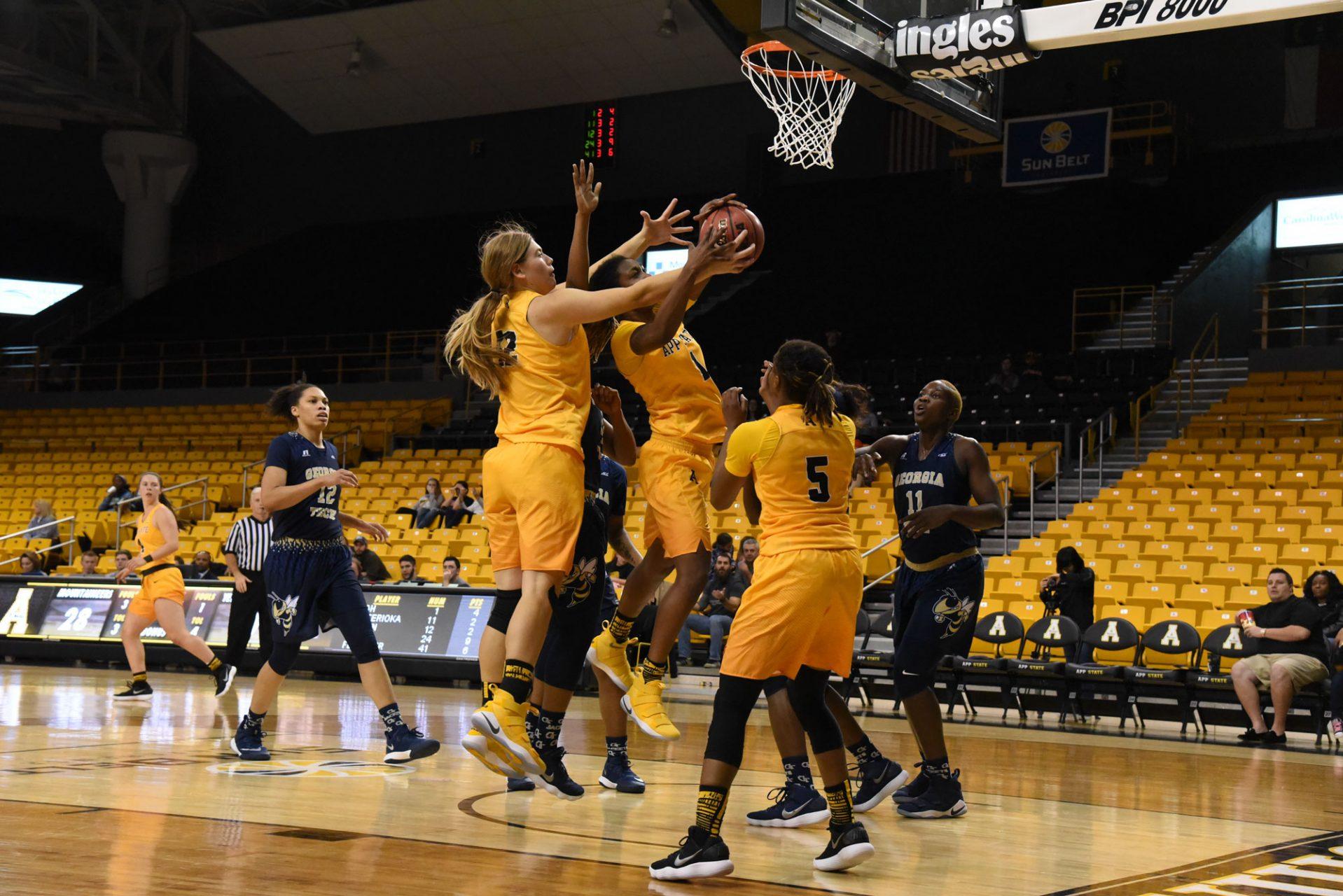 Sophomore center Bayley Plummer and freshman Maya Calder both jump up to score during the game against Georgia Tech.

The guards had their moments against the Blazers, getting nine of their 24 shots from the floor to drop for a 37.5 percent clip, along with going six for eight from the free throw line and grabbing two steals. However, they shot less than 30 percent from 3-point range and were responsible for eight of the team’s 18 turnovers. Starters Tierra Wilson and Nicola Mathews combined for only 27 percent from behind the arc, with Wilson attempting seven shots but getting only one to fall. App State took nearly 40 percent of their shots from 3-point range, showing that they will be relying on the jump shot for a majority of their offense this season. If that is the case, they will need better production and shot selection from their guards.

Forward play was the driving force behind App State against the Blazers, posting a 52.6 percent shooting percentage on 19 shot attempts. The group also had 14 of App State’s 33 rebounds and five takeaways. Freshman LaPresha Stanley, normally seen in the guard position, started the game in a forward slot for the Mountaineers, going seven for 12 from the field for a 58 percent clip and tying guard Tierra Wilson for a team-leading 14 points. Stanley also had five rebounds and five steals in the game. However, the forwards missed both of their 3-point attempts, made only one shot out of eight from the free throw line and turned the ball over six times. As a team, the Mountaineers had no points in the paint, a reflection on the lack of post skills in the forward position, which is something most teams need to succeed.

Sophomore Bayley Plummer was once again the only center for the Mountaineers. She had a solid game, especially defensively, where she grabbed 10 of her 12 rebounds and blocked four shots, a season-high. She also got three of her five shot attempts to fall and three of her six free throws, just 1 point shy of a double-double with nine scored. However, she contributed three turnovers and grabbed only two offensive rebounds. None of App State’s players could get points in the paint, a place where Plummer was sorely needed for second chance efforts on missed jump shots.

Player of the Game: Bayley Plummer

Plummer contributed 9 points, good for third on the team, and led the floor in defensive and total rebounds. She set season-highs in blocked shots with four and free throws made with three, and took smart shots from the field. Her 12 rebounds bring her up to 71 on the season and 11.8 per game, tying for 34th and 10th in the nation respectively.

The Mountaineers started off slow, managing only a 28.6 percent field goal percentage, two for eight from 3-point range and five turnovers in the first quarter. They finished strong however, elevating their field goal percentage to 45.8 before the game was over. They also went on a 16-2 run in the fourth quarter to bring themselves back from a 22-point deficit to contending for a win. However, they turned the ball over 25.4 percent of the time and averaged only .831 points per possession. They also tied for their season-low in rebounds and had their lowest assist total, 7, since their second game of the season.