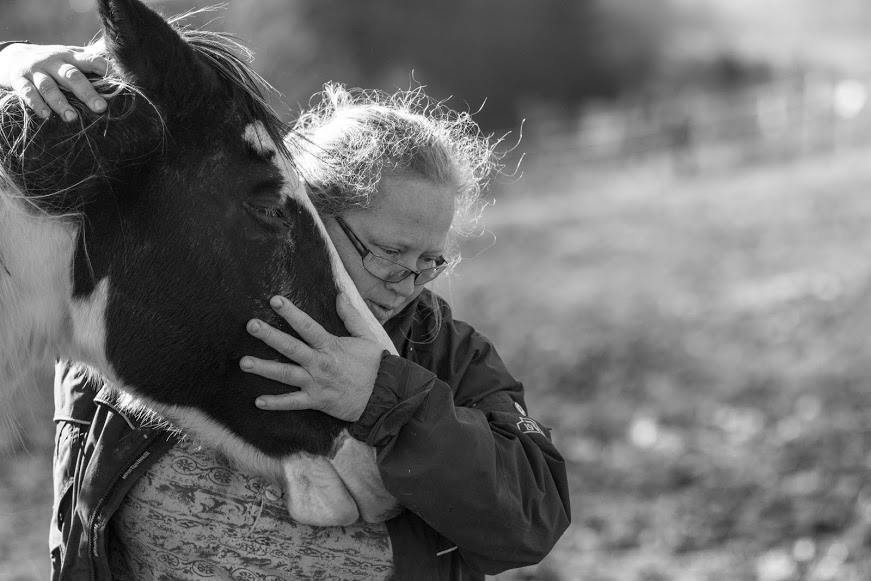 Amy Hudnall, ASU lecturer and president of Horse Helpers of the High Country, embraces one of the horses the organization has rescued from abuse, abandonment or neglect. Photo by Chris Deverell | The Appalachian

As part of the MLK Challenge on Jan. 19, Appalachian State University students devoted time volunteering at Horse Helpers of the High Country, a non-profit equine rescue organization, but the organization is now financially struggling to provide sufficient hay to the animals.

HHHC was started 11 years ago by Anita Gomez, a retired Animal Control officer and the help of others in order to protect and save equines that have been abused, neglected or abandoned.

“Our Animal Control laws kind of let farm animals fall through the cracks, because there’s really not enough laws to protect them,” said Amy Hudnall, president of HHHC.      Hudnall, also a history lecturer at Appalachian State University, said animal protection laws in North Carolina are adequate, but may be interpreted differently  by county.

On average, HHHC rehabilitates horses physically and emotionally for a year although the conditions in which the horses arrive in vary.

After rehabilitation, individuals looking to adopt a horse go under a background check, are asked to come spend time with the horse and learn what and how the horses have been taught before taking them to hopefully permanent homes.

Healthy horses cost about $2,500 a year, not including housing or training, but rehabilitating a horse costs about $5,000 annually, Hudnall said.

Last year, the organization had between 20 to 24 horses and spent more than $12,000. Currently, 13 horses are under the care of the organization, but hay is scarce this season and therefore, prices have nearly doubled.

“Next month, I think we’re going to really start seeing people with starving horses, because they can’t get hay,” Hudnall said.

HHHC needs hay to feed their animals, but also to provide horses off the property with hay due to the shortage, Hudnall said.

Since hay is scarce in the area, HHHC is having to bring in hay from other places, including Canada, only increasing the cost more. During winter, the horses require extra care so that they stay warm, don’t dehydrate due to the frozen water or get colic.

HHHC’s income goes into the maintenance of the horses, the property and less than one percent goes to their one employee who works part-time or about 15 hours per week.

There are 25-30 regular volunteers that help to do various things and an estimated 50 volunteers come and go throughout each month, but the work is so endless that they are still in need of more volunteers, Hudnall said.

“I can’t even count how many personnel hours it requires to keep an organization this big running, because you’re not just dealing with mucking stalls,” Hudnall said. “You’re dealing with keeping up fences, publicity, fundraising, board meetings, planning and it’s all done by volunteers. I’m so amazed by my volunteers.”