How campus has changed since 2018 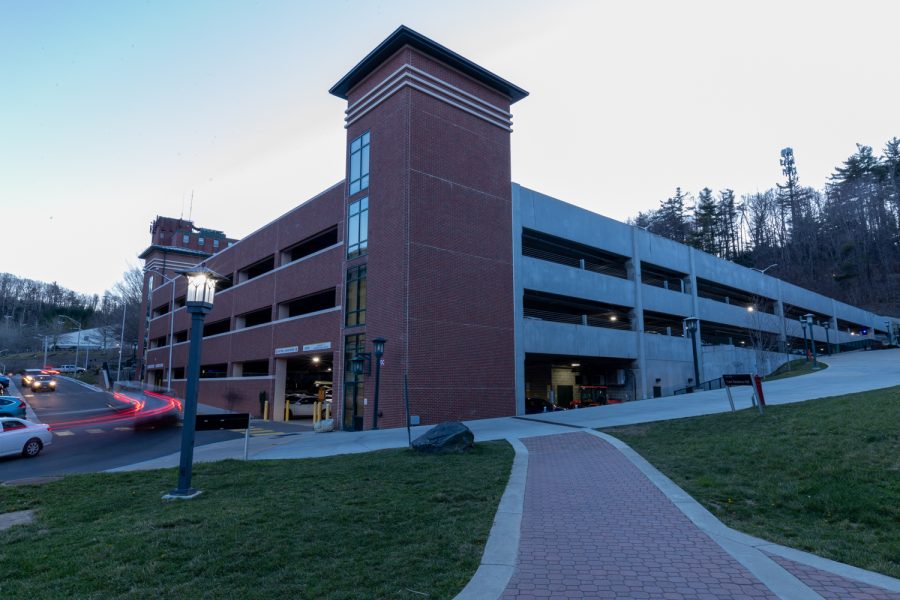 Appalachians State University’s newest parking deck, referred to as “the stadium parking deck,” March 28, 2022. It was built where Winkler Hall used to be, the deck was completed in late 2019.

Since the class of 2022 began their freshman year in 2018, campus has experienced demolished and newly built residence halls, renovated academic buildings and a revamped football stadium.

These campus changes are part of the campus Master Plan 2025, a “guide for the physical development of campus,” according to the university’s website.

The board of trustees finalized and approved the 192-page living document in April 2017, and it includes over 40 individual projects.

Part of the Master Plan 2025 is the P3 Project, a public-private partnership with real-estate company RISE, made up of three stages of construction taking place from 2019 to 2022.

Off the university’s main campus, the Leon Levine Hall of Health Sciences renovation finished at the start of the academic year, with a ribbon cutting ceremony Sept. 21, 2018. This was the largest capital project in campus history.

The first phase of the P3 project began mid-February 2019.

Construction began for a new parking deck on the west side of campus, next to Eggers Hall. The parking deck was not finished that academic year, and it impacted parking for students near the site.

At the end of the semester and beginning of the summer, the surface Stadium Parking Lot was fenced off as new construction projects of resident halls and a new green space began.

Students returned to campus with new and old construction projects in fall  2019, including construction of residence halls Thunder Hill and Raven Rocks.

“We’re going through the process of bidding right now, as well as the initial part of construction,” said Jeff Pierce, director of Planning, Design and Construction, in the campus construction update podcast episode Sept. 30, 2019.

Sanford Hall was heavily renovated throughout summer and fall 2019 as part of an $18 million renovation project. Pierce said the renovation would repair old elevators in the building, improve air conditioning efficiency and modernize common areas.

In the same podcast, Dave Blanks, production assistant and audio engineer for University Communications, said over $300 million of construction was taking place that semester.

Campus construction continued through the start of the pandemic in 2020. University Communications could not be reached for comment at the time of publication on how the pandemic impacted construction project timelines and costs.

Over the summer, Hoey and Lovill halls were stripped of their original names June 29, 2020 due to the racist histories behind their names.

Demolition of Justice Hall began the same summer in July, the second in a series of seven residence hall demolitions scheduled between 2014 and 2022.

Students moved into the finished Thunder Hill and Raven Rocks halls at the start of the fall semester, with a ribbon-cutting ceremony following a few weeks later Sept. 3, 2020. These residence halls are located in place of the previous Stadium Parking Lot.

Though not entirely completed, the first phase of the North End Zone of Kidd Brewer Stadium, which included the fourth-floor Grandview Ballroom, balcony seats and first-floor lobby, opened with a ribbon-cutting ceremony Nov. 13, 2020 in time for the Nov. 14 Georgia State football game.

Phase I of the P3 project was completed with the building of Thunder Hill and Raven Rocks halls and the Stadium Parking Deck. Phases II and III, both in progress during the fall 2020 semester, included building Laurel Creek and New River halls and the Peacock Parking Garage.

New River Hall construction began at the end of the fall semester on top of the recently demolished Justice Hall. The same semester, the Career Development Center began the process of moving from the JET building to the student union in place of the Whitewater Lounge.

At the start of the spring semester Jan. 11, 2021, Chancellor Sheri Everts announced the new names for Hoey and Lovill halls, Dogwood Hall and Elkstone Hall, respectively.

Sanford Hall’s renovation was nearly completed in the spring, with the university administration and the board of trustees celebrating the reopening March 25, 2021.

The second phase of the football North End Zone building encompassed first and second floors and finished in the spring, with athletics staff moving into the building in May. Some of the finished amenities included a locker room, store, various training and treatment rooms and a Hall of Fame collection.

In a campus construction update June 7, Matt Dull, associate vice chancellor for Finance and Operations, said Gardner and Coltrane halls were prepared for demolition by removing furniture, useful technologies such as Wi-Fi routers and hazardous materials not fit for landfills from the buildings.

Several projects completed around the start of the fall semester, including Laurel Creek Hall, the Career Development Center relocation and an off-campus transfer hall.

Following a ribbon-cutting ceremony July 30, Laurel Creek Hall and its 14,400 ft. courtyard opened to a new class of students on move-in day, completing phase II of the P3 project.

The Career Development Center was officially relocated from the JET building to the second floor of the student union the week of Aug. 30.

The previous Panhellenic Hall, located on Blowing Rock Road, was transformed into Mountain Laurel Hall, the transfer hall for the 2021-22 school year.

In other off-campus updates, Everts announced a future App State campus in Hickory in mid-November.

Demolition of Gardner and Coltrane halls finished early in the fall semester, with plans to replace the buildings with surface parking.

Students, faculty and App State fans noticed an incomplete football stadium for the 2020 season, but experienced football games again with a renovated stadium. The third and final phase of the North End Zone was completed in early November with the third floor, which included a reception area, exam rooms and a gym.

Eggers and Boey halls are scheduled for demolition this summer, one of the last steps in the Residential Village project. New River Hall is on track to be completed in time for students to move in for the fall semester 2022.

University Communications could not be reached for comment on changes to parking prices following the increase in spots.

The university’s Appalachian 105 property is scheduled for a complete transformation into a track and field competition and practice area by summer 2022.

Wey Hall, home to the Department of Art, will be renovated for the first time since its opening in 1976. The project is scheduled to begin in spring 2023.