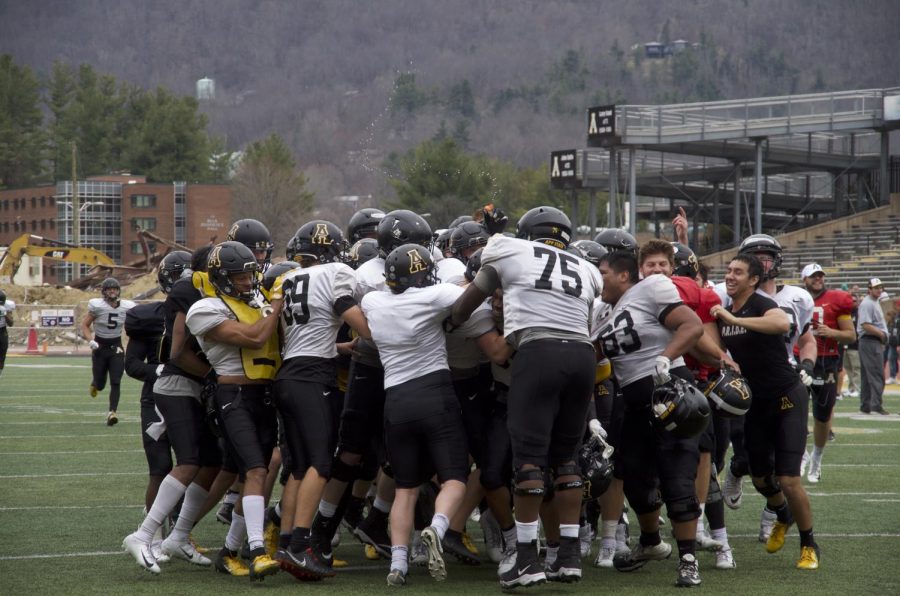 The football team rushes Clayton Howell to celebrate his scholarship with him.

Fans thought they were just watching a football scrimmage on March 30 during Mountaineer Day, when suddenly the field was rushed from both sides. Water was thrown through the air and every member of the App State football team was screaming. The announcer’s voice rang through the air. Sophomore punter Clayton Howell was put on scholarship.

“It was just the best feeling in the world,” Howell said. “We’re such a big family here. It’s a moment I’ll never forget.”

Howell, a High Point native, came to App State in 2017 as a preferred walk-on after turning down a scholarship offer to Winston-Salem State University. He redshirted his first season but earned the starting job as a redshirt freshman in 2018, posting a net average of nearly 42 yards with 10 punts going longer than 50 yards.

The Football Writers Association and The Athletic website named him a Freshman All-American, ranking No. 8 in the country and No. 1 for freshmen in average punt length. His best punt of the year was against Middle Tennessee State in the New Orleans Bowl, going 62 yards before it was downed at the 1-yard line.

“I was just continuing to work, put my head down,” Howell said. “Every opportunity I get, I’ll take the best shot I can give it.”

New head coach Eliah Drinkwitz has only known Howell for a few months but is confident that making Howell a scholarship player was a good decision.

Howell is the first walk-on player awarded a scholarship since Drinkwitz was hired.

“He’s a guy that shows up everyday (and) works hard,” Drinkwitz said. “(He’s) always on time, never on list, has good grades. He’s the right fit for App State, and we’re sure glad he’s a part of the Mountaineer family.”

Howell’s parents were at the scrimmage to see his big moment. His eyes teared up slightly while he talked about the help his parents gave him over the years and the position they have strived to put him in.

“My mom told me she started to cry,” Howell said. “They’re the ones that keep pushing me. My dad is like my rock and always helps me with everything.”

Even through the emotion, Howell could still  crack a joke about what to do with the money his family will save now that he is on scholarship.

“I mean, I would like a Mustang,” Howell said, smiling.