“I can’t let that be what defines me”: App State student beats cancer after three years 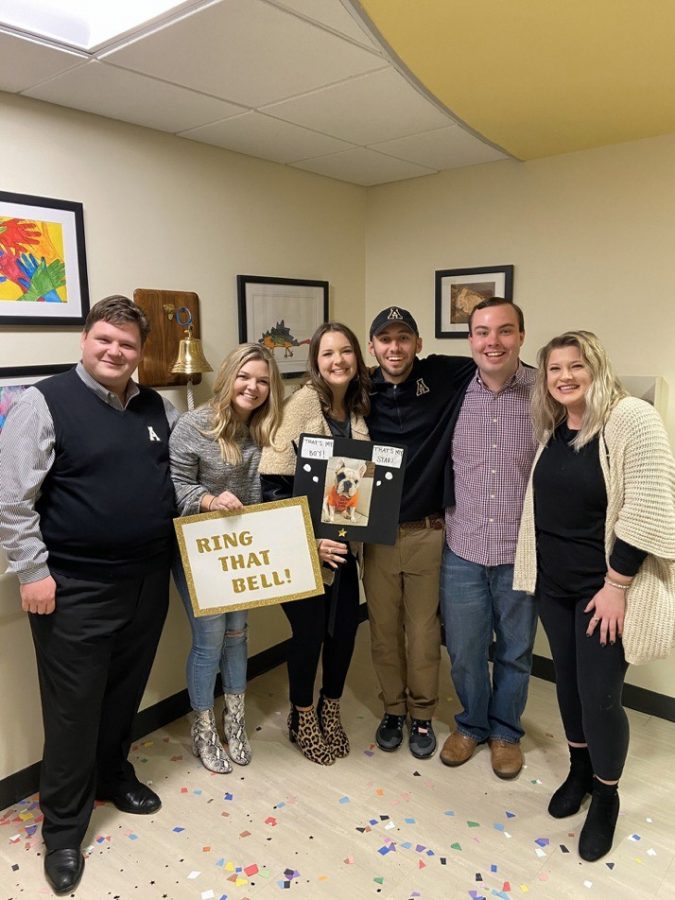 Connor Coker (second from right) celebrates with his friends after ringing the bell to announce he is cancer free after three years. Coker was diagnosed in 2016 and had to leave App State for a year for treatment.

When Connor Coker walked up to retrieve a quiz from a professor, she looked at him and asked if he was OK.

He was coughing, pale and sweating profusely. His professor told him to go to health services, so he left  the classroom to go there.

As soon as he walked out, he knew he wasn’t going to make it. But, he said, it was lucky for him the police department was right next door, and an officer drove him.

After withdrawing from App State after only a month into his freshman year and mere weeks after his 18th birthday, Coker started chemotherapy.

On Jan. 10, three days before Coker, a junior accounting major began his spring semester at App State, he rang the bell at Wake Forest Baptist Medical Center to officially announce he was cancer free.

“Three years of putting in all that hard work to be able to finally ring that bell, it just felt like a weight was lifted off,” Coker said. “Just finally thankful to be done.”

After the doctor told him what he could potentially have his freshman year, his mom, Kim Coker,  picked him up and took him to Cone Health in Greensboro on Sept. 12.

On Sept. 13, Coker was lying in a hospital bed when he got a call from his doctor. Surrounded by his parents and grandparents, he picked up the phone.

“I actually got my diagnosis over the phone,” Coker said. “My doctor did not walk in the room and look at me and say, ‘This is what you have.’”

“It was just another shock to actually get the diagnosis and know that,” Kim Coker said. “For me, I thought our lives are forever changed, you know, from that.”

Though his mom knew their lives would change, Coker looked toward the future and what was next for him.

After the diagnosis, Coker spent a year back in his hometown of Thomasville with the goal to return to school the next fall. In between chemotherapy and doctors’ appointments, he said he laid around and watched TV most of the time.

He said he watched “The Office” in full twice.

“It was just kind of a waiting process. There were many treatments that were worse than others,” Coker said. “I had shots that I’d got in January and February. They made me so sick that I couldn’t eat.”

That first year, Coker had treatments off and on. His mom said some days he would be in the hospital three to five days straight. Others were longer. One stay lasted 23 days.

Coker’s parents were worried about him going back to school that fall of 2017. He was still sick, and he and his parents both said living in a dorm is not the cleanest environment.

He had a single room when he came back.

“For us, as parents, it was scary because we didn’t have him right here underneath us,” Kim Coker said. “Even though he was an adult, we still needed him to be here so that we could monitor what he was doing.”

When he first returned to App State, his parents said they continually checked up on him and reminded him to take his medicine.

Despite treatment, Coker’s parents said he always put his responsibilities and passions first.

“A lot of times we had to rearrange schedules so that he can continue doing what he loved because he did not want to stop life,” Kim Coker said.

Coker wanted to do more even though he was traveling to get treatment. His second semester back, in spring 2018, he became a manager on the football team.

His schedule for treatments was partly based around the football schedule.

“I’d drive home Monday night and stay at my house in Thomasville,” Coker said. “I’d wake up the next morning, get treatment, hope to be done by 11 o’clock so that I could stop and get lunch and then be back up here to be on time for football.”

Coker didn’t see cancer as something that got in the way of life.

The Coker family has always supported App State football. His parents have had season tickets, and often traveled to Boone to watch football when Coker was young. He said he has attended all of the top 10 attended home games except for Miami — the week he was diagnosed. His family even attended a game during his first year of treatment.

During the last home game of 2016, his parents said the school made arrangements so they could go to the game, but stay inside because it was too cold for Coker to be outside.

Coker was also part of the Student Yosef Club when he first came to App State.

Chase Cross, who was the president of the Student Yosef Club during Coker’s freshman year, posted on Facebook asking if people were interested in joining. In response, Coker sent Cross a message to see how to join.

Coker and Cross grew up living 10 to 15 minutes apart from each other, but never met before college. Now, Cross said their families are close.

When Coker was away from App State, Cross said he stayed in contact with him throughout treatment, and they became better friends through constant communication.

During the fall 2019 semester, Coker and his family hoped that he would be able to announce he was cancer free sometime in December or January.

“When we got to about October, it became clear that the date was going to be Jan. 10,” Coker said. “It really became a day that we looked forward to.”

When Coker finally rang the bell, it was a day that Coker’s father said was “one of the greatest joys other than holding him when he was first born.”

“For him to get back to school and do what he’s done for the last three years, going through treatment, then for him to ring that bell, it was just this overwhelming joy,” said Josh Coker, Coker’s dad. “I don’t, I don’t know any other words.”

Throughout the treatment, his time away from school, and the constant traveling to continue his treatment, his parents had friends and family come up to them over the years and say they had never seen anybody as positive as Coker.

“It was almost to the point like you wouldn’t even know he had cancer had you not known it because he was always so positive and so upbeat, never downtrodden, never down on himself, no matter how sick he was, no matter what he was going through,” Josh Coker said.

And for Coker, finally ringing that bell meant he was done with the disease that challenged the first few years of his college experience.

“It just felt like a weight was lifted off,” Coker said. “The first person that came was my dad. That was my dad that hugged me. He wouldn’t let me go. Just that feeling was — just finally thankful to be done.”