“I cried the day we shut the doors:” local fashion retailers hope to recover facing uncertainty 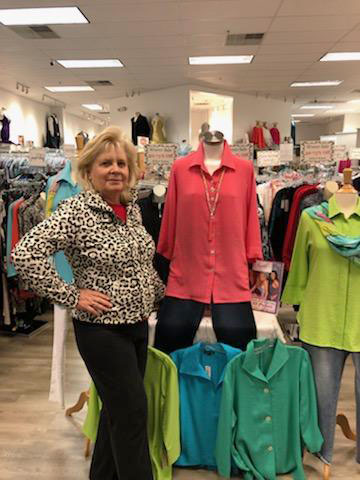 Lou Ella South, owner of specialty store South's Clothiers in Boone Mall, has joined other local retailers in applying for federal loans in order to help her business survive the pandemic.

Though vacant and dark after temporarily closing March 24, Boone Mall was dimly lit by a storefront that displayed its fashion lines for the upcoming prom season that never happened.

Open since 1983, South’s Clothiers is a local specialty store that carries prom dresses, wedding gowns and rental tuxedos. After the mall’s closure in response to the COVID-19 pandemic, the store shortened its normal hours and let customers make private appointments.

On March 27, Gov. Roy Cooper issued a statewide stay-at-home order to minimize the spread of COVID-19 by banning gatherings of more than 10 people and directing the public to stay at home unless completing essential tasks.

A day later and at the height of prom season, South’s Clothiers temporarily closed its doors.

Even after seeking federal funding to stay afloat during the pandemic, Lou Ella South, owner of South’s Clothiers, said there are limitations to the financial support.

“I filed for the Payroll Protection Program. And, that means that if you hire all your employees back, and use 75% of the loan money for your employees, and you have the same amount of employees after the eight week period, you don’t have to pay the money back,” South said. “The rest of the 25% can be used for rent or mortgage or utilities, but you can’t use that money for anything else.”

South also applied for the Emergency Disaster Relief loan through the Small Business Administration for $10,000, but does not know if she will receive the full amount, or if she is eligible for the loan at all.

Laura Hickey, assistant manager and a bridal consultant at South’s Clothiers, said customers are also on the painful receiving end of the shutdown.

“Some of the girls have taken this in stride, (and) other girls are just completely flipped out. Part of the problem I think with brides is they lose all of their money on deposits they’ve put with caterers, and flowers, and venues,” Hickey said. “That money is not coming back; they’re losing it. We are trying to get monthly payments on the wedding gowns because that’s what keeps us in business. I think it’s hard for people to make plans. We don’t have a pattern for this. It’s just hard all the way around.”

Other local retailers have been met with similar challenges; Anna Banana’s owner Anna Roseman said as soon as her consignment shop’s doors closed on March 19, sales decreased and layoffs were inevitable.

“We have to achieve a certain amount of sales each day in order to keep the lights on, pay the rent, taxes, insurances, make payroll … the list goes on. What we sell in one week pays the bills for the next, and hopefully, we have some leftover,” Roseman said.

The day she had to temporarily close her King Street store after being open for 9 ½ years, Roseman said she feared the worst.

“I cried the day we shut the doors. It felt absolutely surreal. I’ve always felt Anna Banana’s was my second child and a dream fulfilled. Most obstacles I know I can survive in life and in my little business,” Roseman said. “Immediately, my next thoughts were strategic. What’s the best I can do with what I know today? Then, thinking of all the possible scenarios of what could happen next and a game plan to survive.”

Roseman said temporary closure has helped her pause and think about how to advance Anna Banana’s going forward.

“Right away, I made my list of things that I must improve. I’m also working on plans that will streamline and simplify the store in order to move forward in this new world,” Roseman said. “Now, I feel very much the same as when I first opened Anna Banana’s: that fire in my belly to reinvent again, and that’s one of my favorite things to do.”

Down the street from Anna Banana’s is Lucky Penny, a boutique that has specialized in bohemian lifestyle clothing since its owner, Jennele Vaquera, graduated from App State and opened it in 2007.

“I told my employees that if they were not comfortable being here, they could absolutely tell me, and I would bring them back on when they felt it was safe,” Vaquera said. “When it became apparent we would not be able to operate, I had to tell my staff (that) hours were no longer available. That was a hard day.”

Like Anna Banana’s and other local retailers, Lucky Penny is still operating through its Instagram account to promote product shipping and store sales. However, Vaquera is still looking to the future and hopes to recover.

“I really have been looking at the time I spend (at Lucky Penny) behind the scenes, and I realize I may never be able to step away. I’ll always have to be there most days, and that’s OK,” Vaquera said. “I love the relationships I have developed over the years. The support I have had over these last few weeks has really been amazing. This town is so special.”

Lauren Sabetta contributed to this story.