“I feel like that’s my brother:” App State inside linebackers Cobb and Jackson flourish in 2020 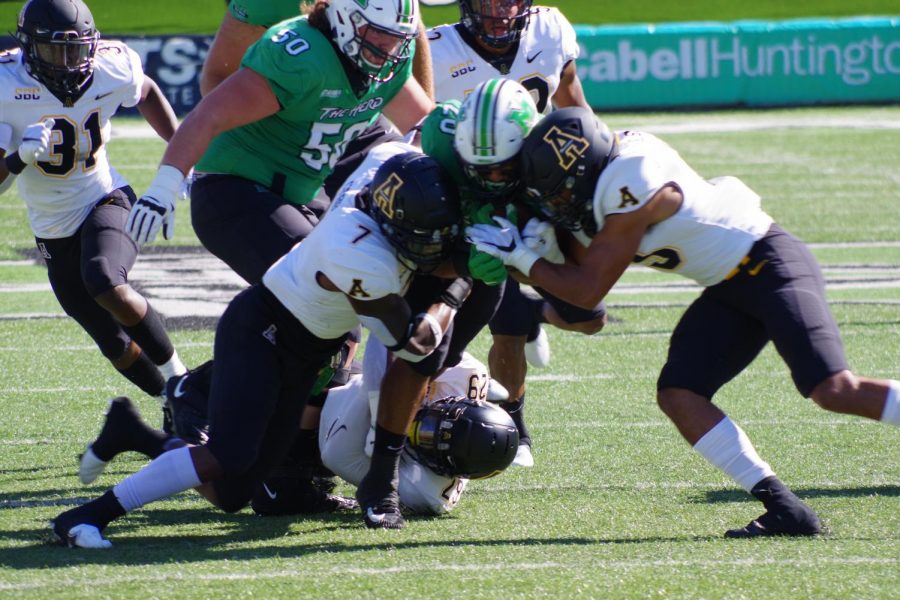 App State junior linebacker Trey Cobb (#7, pictured at left) helps make a tackle during the loss at Marshall Sept. 19. Cobb and fellow junior linebacker D'Marco Jackson have stepped up in 2020 to help fill the holes left by the departure of Jordan Fehr and Akeem Davis-Gaither to the NFL.

Junior inside linebackers D’Marco Jackson and Trey Cobb entered the 2020 season as starters after Jordan Fehr and Akeem Davis-Gaither left for the NFL.

“Playing with those older guys and seeing how they played and how they came into the game, we really just wanted to install that in our games and become better players and leaders so we can lead this defense after they leave,” Cobb said.

The duo has produced on the field, but they also focus on being leaders in the locker room.

“Stepping up and being more vocal when things aren’t going well. Step in and say ‘hey, let’s get this stop right here’ and just keeping the guys up,” Jackson said.

When they were underclassmen, the two shared snaps at the linebacker position and grew together on and off the field.

“I look at Trey as a brother. I remember last year we were sharing snaps, but we never let that get in the way of our relationship,” Jackson said. “Doing that last year helped us communicate better with each other and working out the problems. I feel like it’s different when you’re closer to a person and they can hear your voice more.”

As the leaders of the linebacker group, being so vocal between each other has allowed them to grow as players and make adjustments on the field quickly. Being close friends has led them to be able to rely on each other to help lead defense.

“Anytime we need one, we lean on the other one so we can help each other and continue to get better every week,” Cobb said.

Defensive coordinator and inside linebackers coach Dale Jones was on the App State staff when Jackson and Cobb were freshmen. After taking a year coaching with Louisville, Jones returned to Boone this year and had strong words for his junior linebackers.

“D’Marco and Trey, both, they had gotten reps. They’ve played in the games — played in the big games and played in all the games. Over time, you gain confidence. Once you get the confidence and once you’ve done it, it seems like nobody can tear you down, or you can win every battle. That’s part of all the guys that have played a lot of ball for us,” Jones said.

As freshmen in the 2018 season, Jackson led underclassmen in tackles with 25, while Cobb finished with 14.

In their sophomore year, both players took a huge step up in playing time and production for the Mountaineers. Sharing snaps behind Fehr and Davis-Gaither, Jackson and Cobb each more than doubled their tackle totals from their freshman year, helping App State finish the season with a 13-1 record, including a Sun Belt Conference Championship and a win in the New Orleans Bowl.

Continuing that success into their junior season, head coach Shawn Clark has put a lot of trust in them taking on such large roles on defense.

“So far, they’ve had an outstanding year. Great football players, great young men and great examples for what we have in our program,” Clark said. “Those guys really elevated their game this year, not only on defense, they’ve really given us a shot in the arm on special teams…  They play the game (relentlessly) and they’re the leaders of our defense.”

As juniors for the Mountaineers, Cobb and Jackson have the option to come back for their senior year and have plans for what they can do with that opportunity.

“It means a lot. Creating a legacy for both of us. Carrying on the tradition of John Law, Eric Boggs, Akeem, Jordan, Noel Cook. Just keeping the standard up and making sure we don’t let anybody down,” Jackson said. “Trying to improve and keep the tradition going here at App State, especially on the defensive side of the ball being dominant.”

Cobb mirrored the same feelings on their potential senior season, knowing they still have work to do here at App State.

“I feel like we’ve grown a really great bond together, so that carries over to the field, that helps us in our play,” Cobb said. “I feel like we have that connection, so I feel like that’s my brother.”