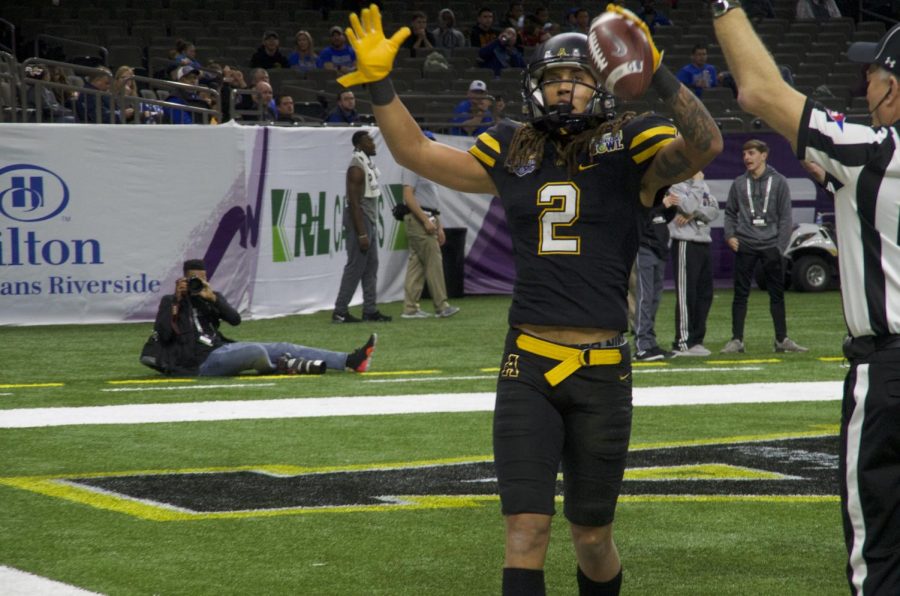 Junior wide receiver Corey Sutton celebrates after scoring a touchdown against Middle Tennessee at the New Orleans Bowl on Dec. 15.

Before transferring to App State in 2018, Sutton allegedly failed two drug tests at Kansas State, which led to his scholarship being revoked, according to an ABCNews.com story.

The Charlotte native played his freshman year, 2016, with the Wildcats and caught four passes for 54 yards in 11 games. Sutton redshirted his sophomore season at K-State and announced plans to transfer prior to the conclusion of the season.

Initially, Snyder refused to grant Sutton his scholarship release, which would have allowed Sutton to transfer, but would have kept him from being able to receive any scholarship money.

After making some national headlines, Sutton was eventually granted his release and transferred to App State.

In a statement from App State Athletics, head football coach Eliah Drinkwitz said, “Corey Sutton has been suspended for the Aug. 31 season opener for a violation of team rules.”

The dynamic wide receiver is able to play in the week two matchup against in-state foe Charlotte at home.

In his first year, Sutton led the Mountaineers with 10 receiving touchdowns, 773 receiving yards, 44 catches and an average of 17.6 yards per reception. One of his most impressive performances came in week two when the former Mallard Creek High School standout torched his hometown college Charlotte for 155 yards, including a pair of 90 and 27-yard touchdowns on three catches.

Sutton will watch from the sidelines as his teammates take on FCS opponent East Tennessee State at 3:30 p.m Saturday.