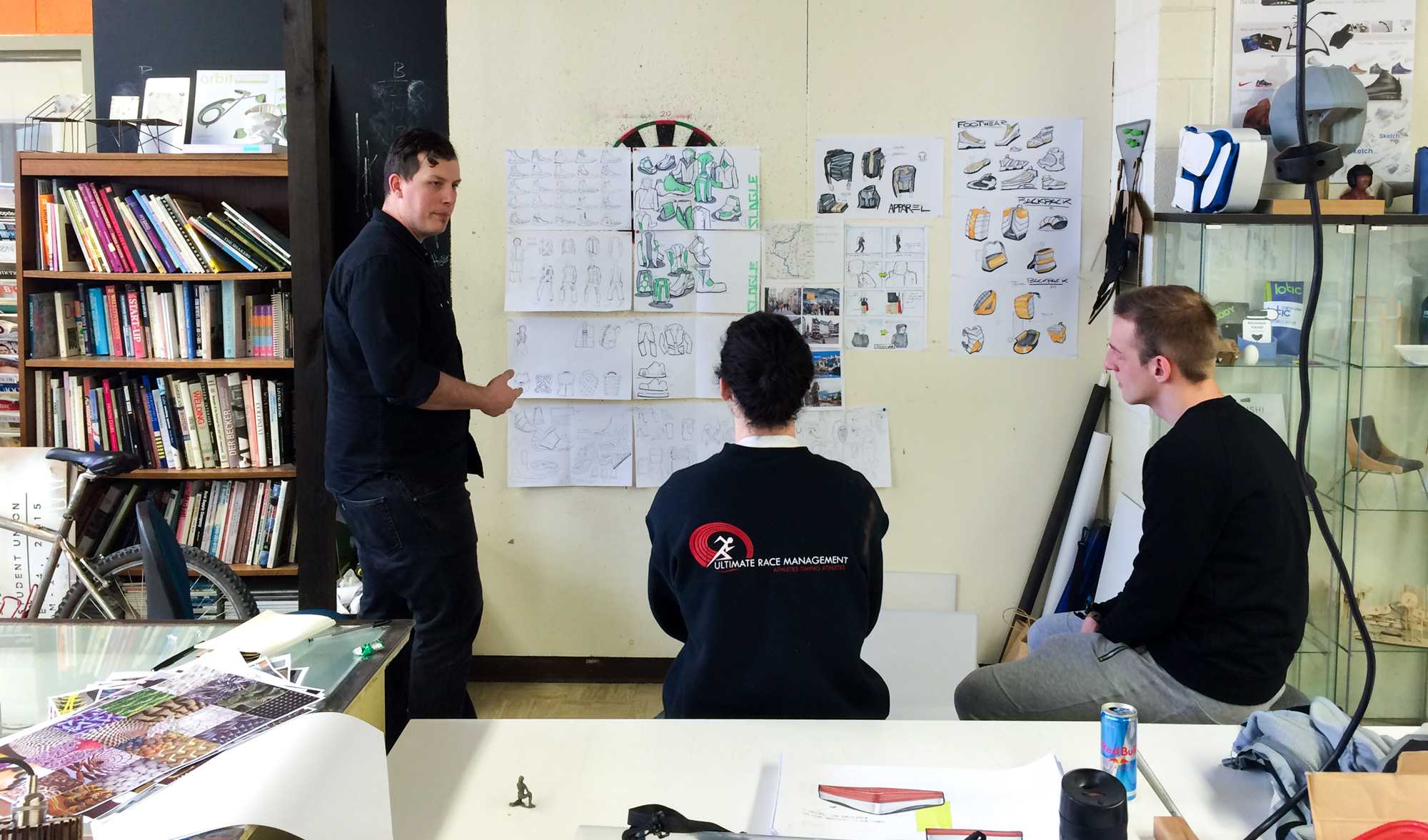 Twice a week, a room in Katherine Harper Hall buzzes with the ideas and thoughts of 14 students collaborating with each other to work on their drawings, storyboards and mini-sculptures.

The Department of Applied Design’s industrial design class and apparel design and merchandising programs are collaborating together on the annual sponsored studio. This semester, Reebok Future Divisions is sponsoring the studio with designer Hank Hardigan III. Hardigan III has reviewed the students’ work twice since the studio launched in January.

In spring 2015, Wilson Art, a manufacturer of laminate materials, sponsored the studio by donating their materials. The industrial design students then made chairs out of the material and the chairs were exhibited at the International Contemporary Furniture Fair trade show in New York City.

“It is a big design show,” Richard Elaver, applied design assistant professor, said. “One of the designers of Reebok saw what our students had done and started a conversation with Richard Prisco, the industrial design department chair. He made the connection and we developed the project.”

Industrial design is where “art and engineering meet,” Elaver said. The students are focused on form and user interface for the products and furniture they are designing. Elaver said, “Anything you have seen at Target for sale had been influenced by industrial design.”

Elaver said the students are designing “far off concepts” and looking at different materials and ways of construction. Elaver is including the applied aspect of this course that he said is looking at more “out-there forms of design.” The students have been exploring forms and structures like coral or fish scales and have made abstract-form sculptures to think about different aesthetics and structures for their designs.

“For a while it was a sculpture class, now they are steering their visual ideas back to form a line,” Elaver said.

The Reebok sponsored studio is broken up into four  student-chosen groups: Pure Bar, Urban Exploring, Modern Nomads and Recovery. Each group is designing footwear, bags and other various gear items. While working under those areas and thinking of designs, the students are now coming together to produce a line.

Talley works with the Urban Exploring group, and the target audiences are those who are interested in photography. Talley said that the idea of urban exploring is to appreciate the past, and that its aesthetic is “post-apocalyptic and Mad Max inspired.”

Paul Slagle, senior industrial design major and member of the Reebok sponsored studio, is a part of the Modern Nomads group. He said that the point of the sponsored studio is to “find new activities with small following that appeal to certain markets that do not already exist.”

Slagle’s group is designing soft goods, such as messenger bags, vests and jackets. The target audiences for Modern Nomad are those who like to travel or those who are not established in a certain area. Slagle is aiming for aesthetically pleasing as well as practical travel apparel. His group is focused on designing apparel for storage and modularity.

They aim to design apparel that is easy to store everything on their body, and to design apparel or shoes that can transition according to weather conditions “while retaining a certain aesthetic,” Slagle said. Slagle describes this line as “futuristic yet primitive.” While incorporating primitive ideas of storage and dress, Modern Nomad aims to modernize this approach.

“We are focusing on angular shapes and competing with organic forms of primitive designs,” Slagle said. “Things that worked in the past ideally we want to update using new materials but also retaining older materials like leather and wools.”

Elaver said that the inspiration for the aesthetic line produced would eventually “trickle down to average consumer.” Elaver gives the example of trickling down by talking about tennis shoes, and how people still wear them even if they do not play tennis.

The plan for the Reebok sponsored studio is to show the finished prototypes profesionally assembled by Reebok Future Division, at the apparel design and merchandising showcase on April, 24 at 4 p.m. in Schaefer Center for the Performing Arts. Tickets are $8 for students and $10 general admission. Finished prototypes will also be shown at the senior showcase on May 6.