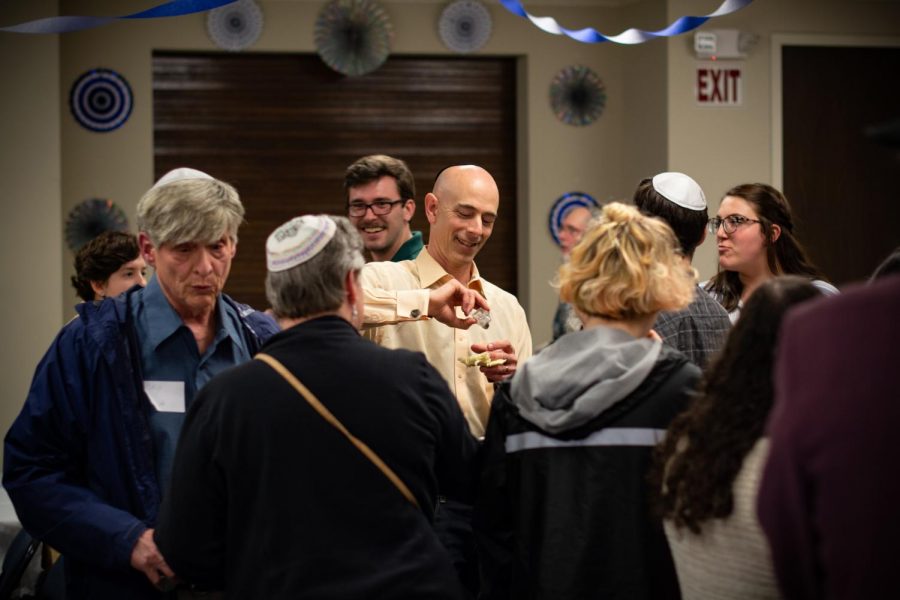 The last of daylight seeped through 10 blue and purple stained glass windows, engraved with the Ten Commandments. By 6:15 p.m., about 40 people gathered in the Temple of the High Country on April 12 for the third annual Pride Shabbat to celebrate the LGBTQ community on Judaism’s weekly day of rest.

Fernandez made the service as inclusive as possible by using “siblings” in place of “brothers and sisters,” and when it was time to stand, they said, “Rise as you are able,” physically or spiritually.

Senior exercise science major Samantha Lew said she appreciated the inclusion and affirmation of the LGBTQ community in the  prayers. One of the English readings, “Ma’ariv Aravim” by Rabbi Reuben Zellman, described everyone as “Twilight People” that are “many identities and loves, many genders and none.”

“That’s not something you see very often in different religions and different services,” Lew said.

To add energy to the service, Fernandez gave the congregation drums and tambourines to play during some of the songs.

Because Hillel held the event in the temple, it included more Hebrew in the service like a typical Shabbat. Knowing that switching back and forth between the siddur and program would confuse people, Fernandez indicated page numbers to help congregants.

“I definitely had a hard time keeping up with the Hebrew,” Lew said. “The siddur was something I was very unfamiliar with just because it goes back to front, and not front to back.”

Lew, marketing and publicity chair for the Presbyterian Episcopal Campus Ministry, said she enjoyed participating in a faith tradition different than her own.

Lew said she also enjoyed everything after the prayer service, the Kiddush, HaMotzi and the meal.

Fernandez said one of their favorite parts of Shabbat is HaMotzi, when the congregation blesses and breaks bread. Everyone either touches the bread or touches someone touching the bread.

“We all come together physically and touch the challah and form a web of community,” Fernandez said.

“Having these special people, to me, in the audience means a lot,” Fernandez said. “And that I can be supported by my religious community, as well, while leading something that’s very obviously queer is really an awesome feeling.”