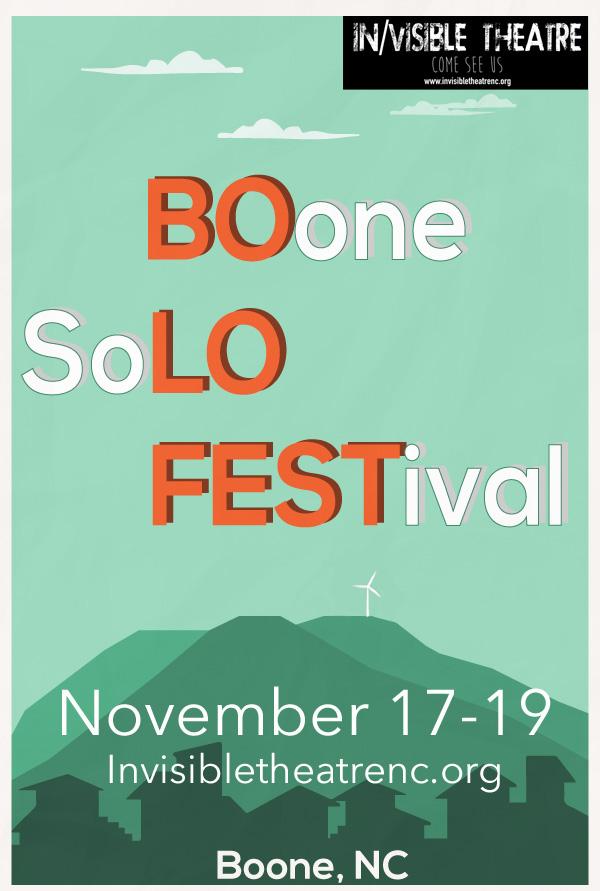 Flier for BOLO Fest designed partially by "Fivver", along with Bridget Mundy. The graphic inside, designed by Karen Sabo, is for In/Visible Theatre, which is the theatre organization that is holding BOLO Fest.

In/Visible Theatre doesn’t always perform in theaters. Past productions have been held in secret locations, post offices and coffee shops.

The theater organization has held women’s arm wrestling competitions in Galileo’s, there have been art exhibitions related to their shows in the Jones House and they performed scenes from Shakespeare inside the Watauga County Library.

In/Visible Theatre will be utilizing many of these locations to hold the first annual “Boone Solo Performance Festival,” or BOLO Fest, from Nov. 17-19. It will be held in the style of a fringe festival, performed within local businesses of Boone including Bald Guy Brew, 3rd Place, Watauga County Library and I.G. Greer Studio Theatre. Tickets are free, and performers include both local community members and out-of-town guests.

Karen Sabo, producer, explained that In/Visible is holding the festival to showcase local artists’ individuals pieces of work, and create “art-repreneurs” within the community.

Fringe festivals consist of alternative theater and material that is usually outside of the mainstream, Sabo said. The festivals often lend to more inventive work, she said, as the performances can be held in increasingly unique spaces, instead of a stage directly created for theater.

Fringe festivals often showcase some of the newest pieces of work, as they are commonly performed as artists develop them. Large theaters typically avoid “edgy” material, Sabo said, in order to reach a wider audience and avoid controversial issues. Fringe festivals, such as BOLO Fest, are held on a smaller scale, she said, allowing more artists more freedom.

“Mainstream theaters are sometimes reluctant because they don’t want to alienate the supporters they need to keep their buildings going, and their staff and all of that stuff,” Sabo said. “And so with fringe festivals, you get some really innovative, interesting material.”

“Major theaters charge much higher, [which] is why contemporary theater in that realm is reserved, honestly, for rich, older white people,” Suggs said.

The performances within the show all have very different in subject matter; but they are all solo pieces, Sabo said. Some of the pieces were written directly for BOLO Fest, while many are new pieces being developed, along with pieces that have been performed for many years. A large portion of the performers wrote their own pieces, some autobiographical pieces and some fictional.

Sabo and Suggs plan for the performances to be dispersed throughout different, unexpected locations, including Bald Guy Brew, 3rd Place, the Watauga County Library and the I.G. Greer studio theater on campus at App State. In/Visible Theatre decided to incorporate local businesses to not only promote businesses that they love and that the community loves, but also to show audiences that theater can be performed anywhere and everywhere, both Sabo and Suggs said.

In/Visible Theatre, while also frequently producing traditional theater productions, typically produces shows that present unique ideas in unique spaces. Sabo said that In/Visible has been experimenting with the locations of their productions even before the birth of BOLO Fest.

“So, in that way, doing a fringe festival in Boone seems sort of a natural thing to come out of everything we’ve done in the past,” Sabo said.

“I hope that audiences gain an understanding of fringe theater, and are inspired to explore and connect with other artists, patrons and fringe theater festivals across the state,” Driskill said.

In addition to their use of unique performance spaces, In/Visible specifically chooses performances and bodies of work that they believe are particularly relevant to Boone and the surrounding high country, Sabo said.

To understand and watch In/Visible Theatre’s productions, audiences do not need to research or have past experience with theater but must be open-minded to different perspectives and innovation in art, according to the organization’s website.

Along with regionally-targeted stories, In/Visible Theatre hopes that audiences will gain a better appreciation for theater.

“I think some people have the impression that theater can be boring, unless you were a theater nerd growing up and realize how fun it is, but just as an audience member, there’s some of that perception,” Suggs said.

The performers within the festival are a mix of professionals, community members, App State alumni and out-of-town guests. John Hardy, Eugene Wolf from Barter Theatre, Suzanne Gray and Leya Topodas are among out-of-town performers.

BOLO Fest provides In/Visible Theatre a way to create what Sabo terms “art-repreneurs,” or “artists that can sort of think like artists and business people.”

In/Visible hopes to provide actors with the opportunity to perform pieces of both their own choice and their own directing, Sabo said. Solo pieces are also easily portable and allow actors to develop pieces that can be performed at various festivals and locations. Actors in particular do not frequently control the roles they play and stories that they tell, but festivals like BOLO Fest allow actors greater influence and agency, Sabo said.

Dancers and community members of all ages will be featured: kids, teens, adults and older adults with canes and walkers, Sabo said. Additionally, the theater intends to hold a series of workshops in the spring for acting, improv and possibly auditioning. The theater has also begun to plan the details of their next traditional production.

The organization’s website states, “Think you might be interested in sitting in a room for a while with other thoughtful people also interested in beauty, truth, complexity and the potential of art to improve the world? Come see us.”