An invite to The Big House 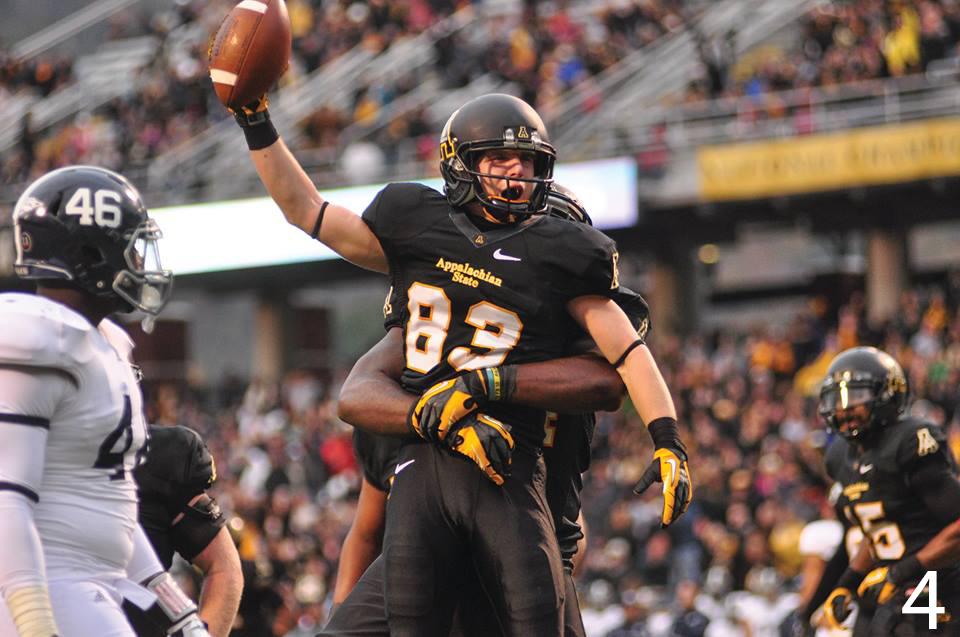 On Sept. 1, 2007, a goalpost from Kidd-Brewer stadium was marched across campus by students and tossed onto the front lawn of former chancellor Kenneth E. Peacock. That was the day App State shocked the world, defeating the winningest program in college football history: Michigan.

This Saturday, App State returns to The Big House in Ann Arbor, Michigan to take on the Wolverines in a rematch of the historic 34-32 victory.

“It was great that they got that win and we [the team] have watched the game plenty of times,” senior defensive lineman Deuce Robinson said. “But now it’s our turn, we can’t live from the past, we’ve got to go out there and make a name for ourselves.”

Throughout practice, constant reminders of Michigan keep the team focused on the gigantic task in front of them.

“We’ve got the fight song playing every day throughout the locker room, the equipment room, even out here on the field,” Robinson said.

Second-year head coach Scott Satterfield aims to improve on the team’s 4-8 record from last year as App State transitions into the Sun Belt Conference. Saturday will mark the first ever game App State will play as a Division I FBS member.

“We’re excited about this opportunity to go back to Ann Arbor,” Satterfield said. “We’re obviously picked as a big time underdog again.”

Satterfield said that despite the hostile environment App State will be playing in, the team’s ability to make big plays, limit turnovers and come up with stops will still determine the outcome.

“What we’re trying to do is just prepare them for anything and everything that could happen there,” Satterfield said. “We know it’s a big and loud stadium, but the size of the football field is the same size in Boone, North Carolina as it is in Ann Arbor, Michigan.”

Experience, though, may not play as big a role once both teams step onto the field at Michigan Stadium. The Wolverines official depth chart lists a freshman and two sophomores among the five starting offensive lineman for this weekend’s matchup.

“On paper these guy’s look young, but I already know those coaches will have them coached up to be a seasoned veteran line,” junior defensive lineman Ronald Blair said. “When we go there it’s going to seem like we’re going against all fifth-year seniors.”

The Michigan offense is led by senior quarterback Devin Gardner, a dual-threat signal-caller capable of beating defense’s with his arm or his legs. Slowing down Gardner will be a huge factor for the game’s outcome, Blair said.

“[Gardner is] a great player and is probably going to go into the big leagues next year,” Blair said. “We know if we contain him we have a good chance in this game.”

Opposing Gardner at the quarterback position will be App State’s junior quarterback Kameron Bryant. After taking the position over midway through the team’s 2013 campaign, Bryant shattered Armanti Edwards’ school record in completion percentage, converting over 71 percent of his passes last season.

Rebounding from eight losses a season ago is what Kameron Bryant said he cares about most, not the individual records.

“We just want to bounce back, we owe it to Coach Satterfield,” Bryant said. “The coaching staff has been fighting for us, trying to get us prepared for games and we owe it to them and the fans not to have a season like last year.”

The victory over Michigan opened the nation’s eyes to App State football seven years ago. Now, that game serves as a reminder of what could happen, Blair said.

“In the weight room they got the game going, so when we go in there to lift, we see the game,” Blair said. We’re trying to repeat history, but at the same time we’re a different team. We’re going to go and do it our own way.”

App State and Michigan kick off at noon Saturday, and will be broadcast nationally on ESPN2 and WatchESPN. With a victory on Saturday, the Mountaineers would become the first team the Wolverines have played more than once and never defeated in the program’s 135-season history.