All that jazz: Todd Wright and friends 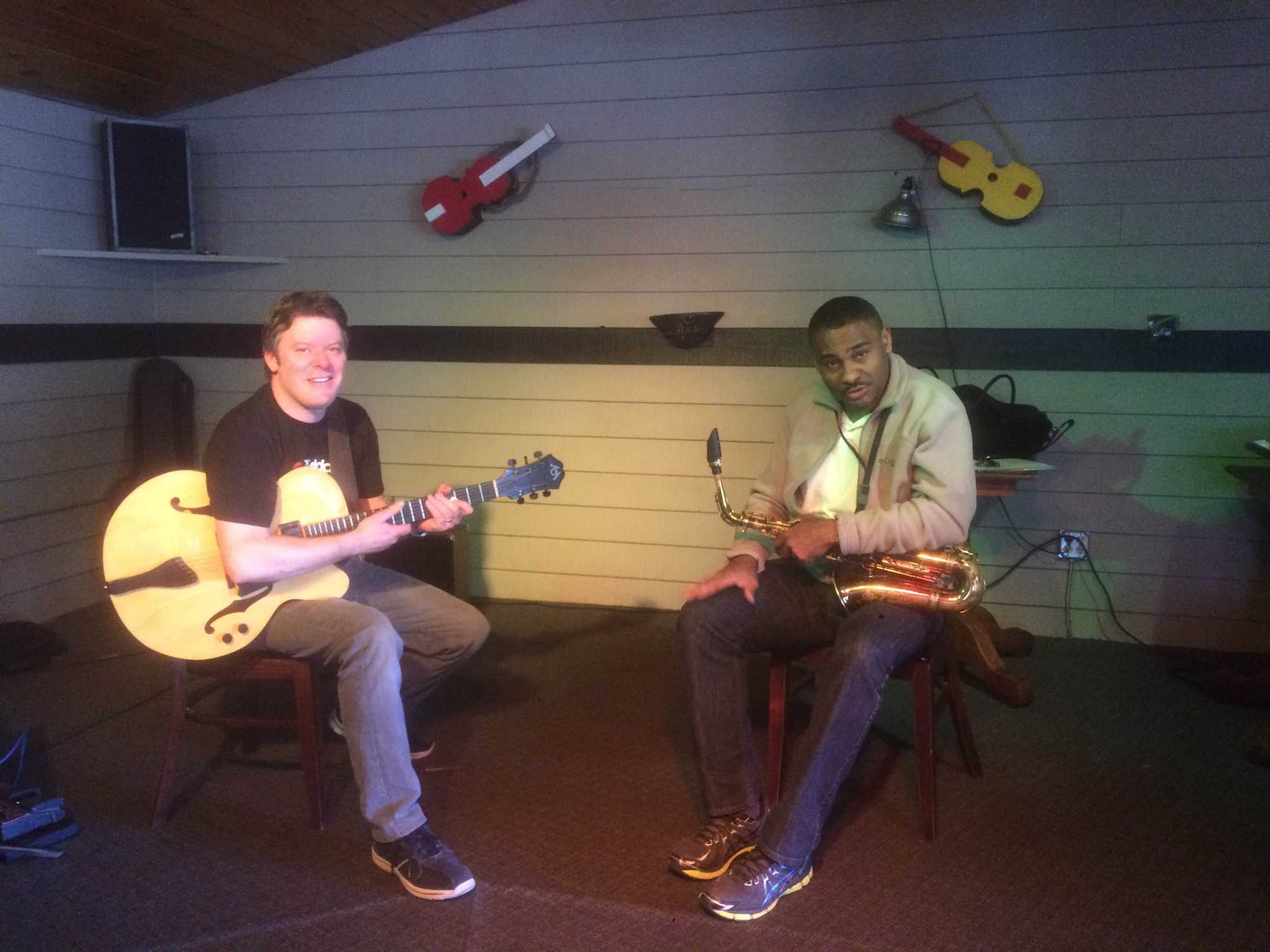 Anderson Page on guitar and Todd Wright on saxophone. Photo by Katie Murawski.

Todd Wright, jazz studies director and Anderson “Andy” Page, adjunct professor of jazz guitar, are members of Todd Wright and Friends and play what they call, “straight ahead jazz,” at Canyons from 11 a.m. to 2 p.m.

Wright and Page break up each set into three parts. They play for one hour and 15 minutes before taking their first break. They start up again and play for 45 more minutes, then break again and play the last 20 minutes of their show.

They also play a variety of jazz and well-known songs such as, “Feeing Good” by James Brown, “Summertime” by George Gershwin and “Moondance” by Van Morrison.

Wright describes the main staples of jazz as swing, improv and instrumental blues.

“The jazz, swing style or feel is we try to encompass when we play this music at Canyons,” Wright said.

Wright first got into jazz when he came to Appalachian State to get his masters degree. He then went on to receive an education specialist degree. Wright has been teaching at ASU since 1990.

“I played in a stage band in my undergrad years in Kentucky, I did improvise but I did not know what I was doing until I came to ASU and started working on masters,” Wright said.

Wright said that he heard his peers at ASU practicing various different patterns and he asked what those patterns were, and they said that it was jazz improv. Wright said it all started for him from there.

Wright started playing for Bart Conway in 1993 at The Tumbleweed Cafe, now Parthenon Cafe, with two former students: Rodney Ballard, drummer and Jim Stevens, bassist. Conway changed the name to The Cottonwood Brewery before it was moved to Howard Street where The Local is now.

Conway started playing at Vances in Blowing Rock, now Six Pence Pub. After a year, Conway opened Canyons and invited Wright back to play. Thus, Jazz Brunch was born and Wright has been doing it for almost 23 years.

One of the main things about being a trained jazz musician, Wright said, is that it is easier to quickly adapt to other styles and genres.

“It is hard to be a trained rock musician and go somewhere and play jazz, but if you are a trained jazz musician you can be interchange and play other music,” Wright said.

Wright has been at Appalachian State since 1990, teaching Jazz Ensemble I, Jazz in American Society, Jazz Improvisation and Jazz Piano.

Wright teaches about jazz improv in the classroom, but said to truly learn jazz, one must listen to it live and imitate it.

“I tell my students all the time that jazz it is not rocket science,” Wright said. “It is a lot of listening and imitation, and on an occasion you come up with something on your own, that is the innovative part of it, [Jazz] is kind of handed down that way.”

While Wright said he enjoys both teaching jazz at ASU and playing jazz at Canyons, Jazz Brunch at Canyons gives him the opportunity to perform and demonstrate what he teaches in his classes.

“When you can go on the bandstand and play those tunes, it brings it to life,” Wright said.

Wright makes it a requirement for his students to hear a certain amount of live jazz throughout the semester. These can range from seeing Wright play at Canyons, going to big band shows or seeing a performance from the ASU Jazz Ensemble.

Wright stressed the importance of going out and hearing live jazz to his students and encourages them to do so, because he said jazz is different in a live setting.

“There is a lot of nonverbal communication that you don’t see in the classroom,” Wright said.

Wright also requires his students to choose a jazz recording and write a review on that, because he believes that is a big part of hearing the difference between live and recorded jazz.

Wright and Page also play at Casa Rustica on Thursday nights from 6-9 p.m. Wright said that some people call it “dinner jazz” however it is really bebop jazz, straight-ahead jazz. They play everything from Charlie Parker to country music, but mainly focus on jazz.

“We play a little bit of everything, we look to the audience and know exactly what they want to hear whether it be an 80-year-old or 30-year-old,” Wright said. “We can cater to the audience, that is the thrust of being a jazz musician.”

Page has been playing guitar at Canyons with Wright for 13 years. Page said that Conway “has been really supportive having us here year in and year out.”

Page described Todd Wright and Friends as interchangeable and freelancers.

“We will play with anyone, because that is the nature of jazz,” Page said.

People have been coming to hear the music at Canyons for years, Page said, and in a restaurant setting, musicians have to be mindful of their intensity level and that it requires a certain amount of energy.

“We never know what tunes we are going to play a lot of times jazz is not like a show,” Page said. “I’m cool with it just being background music because I’m playing a lot for myself and I hope others enjoy it.”

Page said that people devalue music too much these days and by getting paid for playing Jazz Brunch at Canyons he said that he feels recognized for putting so much time and effort into playing music. He said that musicians put so many hours into their music, especially more so when they are a student studying music.

“I remember when I was a college student all my free time was spent practicing,” Page said. “It is a big time investment that needs to be recognized, but you have to earn it too.”

Through Jazz Brunch, Todd Wright and Friends gets a lot of exposure and opportunities. However, Page said that Wright and himself are at a point where they do not need to take every opportunity that is handed to them.

“We get many other offers from being here, and Todd books the gigs out of that,” Page said. “Someone came over to another restaurant in Banner Elk and asked us to start playing there, we said no because there is a certain amount of loyalty we have with Canyons.”

The consistency of playing at Canyons has been through patrons who pass through and always come back, Page said.

Conway said that it has been great knowing Wright and hearing him play at Canyons for all these years.

“We have a good stage and people are tuned in,” Conway said. “Jazz Brunch has become a very good thing to do on a Sunday morning.”