Jesse Jackson gives “With Justice for All: Human Rights and Civil Rights at Home and Abroad” talk on campus 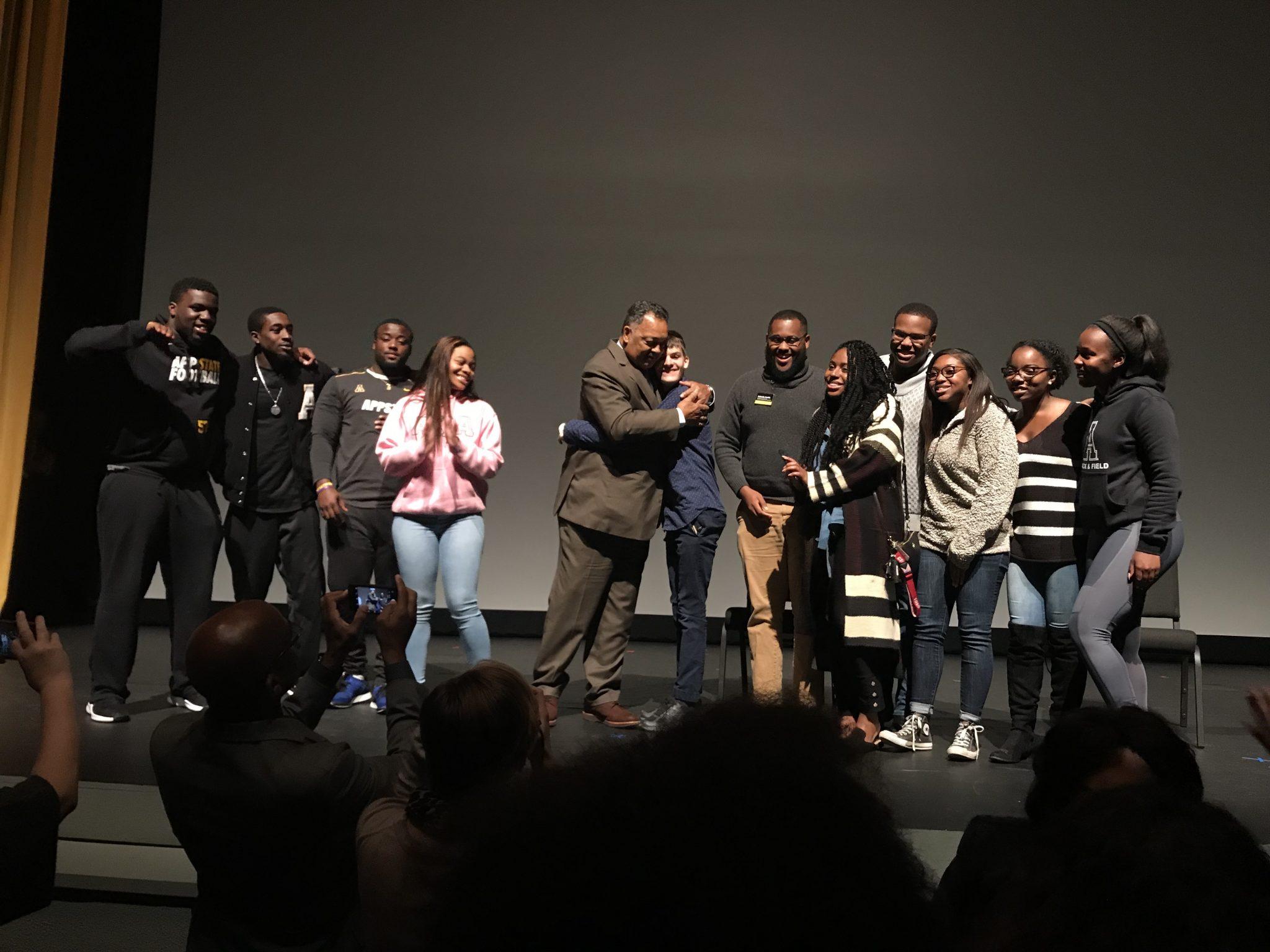 Rev. Jesse Jackson joined by students at the end of his talk on civil rights. Jackson's message to App State is to "learn to live together"

On Oct. 18, The University Forum Lecture Series brought Jackson’s presentation, “With Justice for All: Human Rights and Civil Rights at Home and Abroad,” to the Schaefer Center for the Performing Arts.

Joy James, committee chair for the university forum, said she feels fortunate that App State had the chance to host the civil rights celebrity. Jackson was featured on AppTV’s “Religion and Life.”

“As I was listening to him talk (to students), he’s very profound in terms of how to love people for who they are, rather than their color or gender or orientation,” James said. “He’s truly a legacy to not only what happened in the civil rights movement, but to moving us forward.”

Stevens Rucker said she hoped the audience would receive Jackson’s message with an open mind and heart. Jackson came out to a standing ovation, holding Steven Rucker’s hand in the air.

Jackson opened his presentation with prayer. He said he was in Memphis, Tennessee, where King  was killed, the day before coming to App State, bringing back memories of his civil rights movement days. Jackson said the Appalachian Trail reminded him of his days with King on what would be his last birthday, meeting people of all races and working together for a “poor man’s campaign.”

Jackson revealed that King had internal conflicts about his power in the civil rights movement. Most times, it wasn’t easy to withstand the responsibility and hate over a huge community.

“He said ‘I’m depressed. Maybe I should just quit. We won the Montgomery bus boycott, we won Birmingham, but I can’t quit. I must face what’s in front of me,’” Jackson said. “We grew in unity and keep on marching for justice and peace.”

Jackson’s main message in his talk was learning to live together by respecting and treating everyone equally. He said African-Americans were stripped of respect during segregation, so much so it became unphasable.

“We learned to survive the part,” Jackson said. “We did not learn to live together, trapped in the limitations of the great divide.”

Jackson pointed out that racism is still an issue and that people still tend separate because of skin color. He said race is a gift of God and racism is a gift of the devil.

Jackson said that success in anything comes with equality.

Jackson mentioned App State’s 2007 victory over Michigan, asking the crowd to join him in an “amen.”

As the laughing audience replied to Jackson, he compared the Mountaineers’ victory to the victory for African-Americans during the civil rights movement.

“When you win fairly, there’s a joy of winning, a sense of justice,” Jackson said. “When the playing field is even, and the rules are public, and the goals are clear, and the referee is fair, we can accept the outcome.”

Jackson encouraged the audience to repeat his words throughout the talk to solidify meaning and remembrance. This gave students a voice during the speech. There was also a question and answer session after the talk.

Nadia Jenkins, freshman nursing major, said she attended the talk for class credit, but left feeling honored to hear from someone who witnessed the struggles of African-Americans first-hand.

“In school we learned about the struggles of being black, but it’s never gone into depth,” Jenkins said. “It really opened my eyes even more.”

Featured photo caption: Rev. Jesse Jackson joined by students at the end of his talk on civil rights. Jackson’s message to App State is to “learn to live together.”