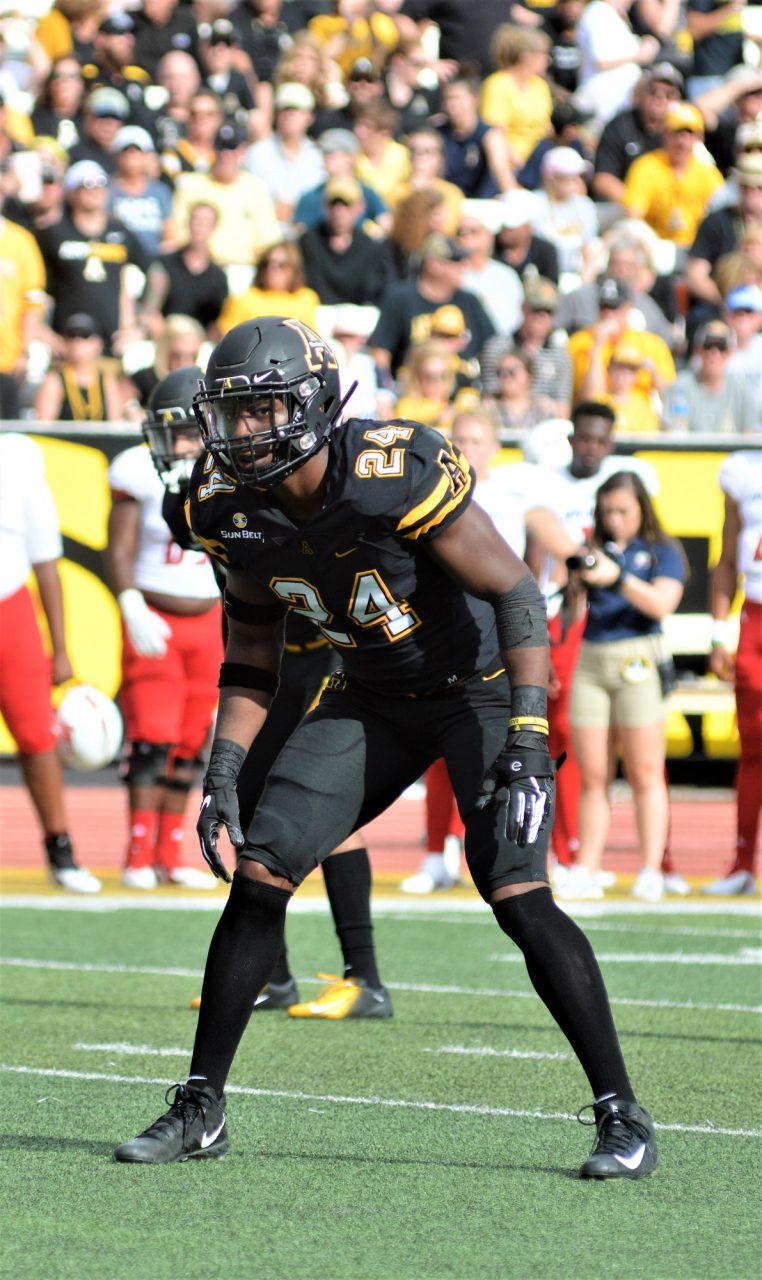 Junior linebacker Akeem Davis-Gaither prepares for a snap against South Alabama in the 2018 Homecoming Game.

Oct. 9 at Arkansas State, the App State football team won 35-9 behind a commanding defensive performance. As a team, they limited Arkansas State to only 317 total yards while forcing three turnovers. The defense was anchored, as it has been all season, by the linebacking core, led by junior linebackers Akeem Davis-Gaither and Jordan Fehr.

Both Davis-Gaither and Fehr recorded 14 tackles against the Red Wolves, and Fehr also had a sack. Their 14 tackles is the highest of any Sun Belt player in a single game this season.

Davis-Gaither said it is great to be recognized, but credited the award to an overall team effort.

“It felt good, but without my teammates it would have never happened- them fitting the right gaps and the coaching- us practicing hard every single day it just happened that I got 14 tackles.”

Davis-Gaither now has a team-high 54 tackles on the season and said his continued success comes from a team mentality of “competing against each other.”

Fehr said his weekly routine ensures his individual performance is as good as it can be, allowing him to help his team as much as he can.

Overall, Fehr said he shares the same “team first” mentality as Davis-Gaither, crediting his teammates and coaches for his success this season. He even said he joked with Gaither-Davis about being named Sun Belt Defensive Player of the Week.

“I told him he should have got it or we should have been co-defensive players of the week,” Fehr laughed. “But I know Akeem will get one soon.”

The Mountaineers’ defense is only allowing opponents 15.7 points per game, according to ESPN. They are the eighth-best scoring defense in the country. Fehr attributed this to inner-team competition.

“We compete everyday in practice trying to see who can get to the ball first. As a unit we work really well together,” Fehr said. “That’s a big thing, as we grow together we compete together so come Saturday we’re all trying to make the plays and find our assignments so we come together like a puzzle.”

On Oct. 20 the defense kept up its winning ways. They limited Louisiana to just 17 points, despite the Ragin Cajuns 36 point per game average. The linebackers played a big part in this- with Davis-Gaither recording 15 tackles and Fehr 8.

With this win the Mountaineers now move to 5-1 on the season and entered the top 25 AP poll for the first time in school history. A big part of this ranking is the linebacking core, that looks week to week as to not lose focus.

“We don’t pay attention to ranking. We just do what we do every single week, and we know that if we keep winning we will keep moving up,” Fehr said.