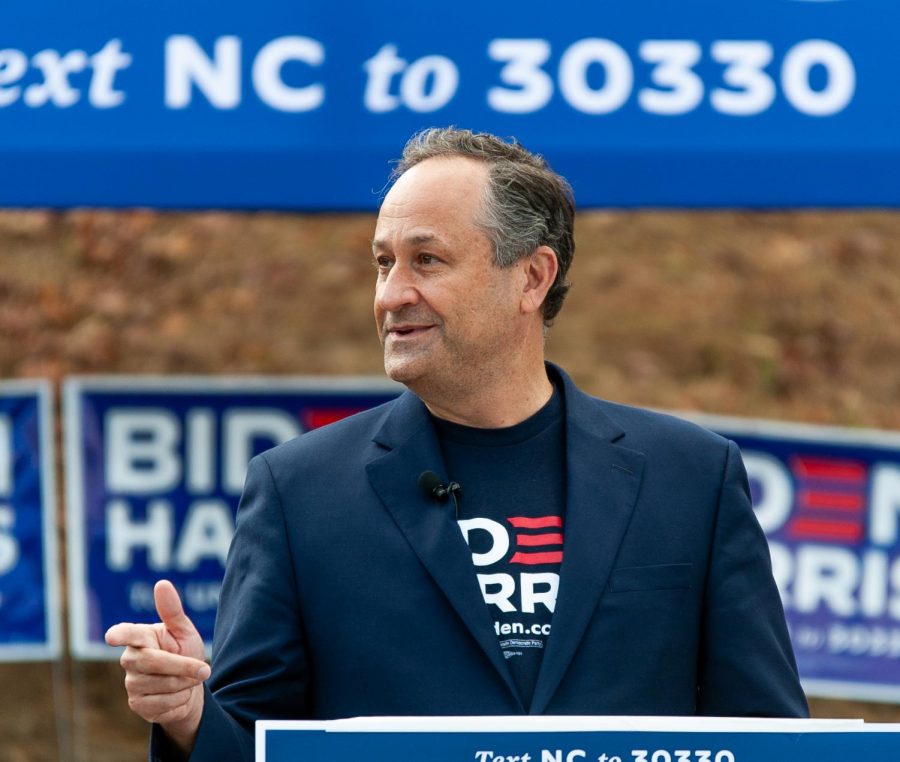 “I’m seeing it all over the country because we are traveling to these swing states,” Emhoff said. “They’re sending me the places where they think it’s gonna be close.”

“We all know this is the most important election of our lifetime,” Russell, an App State professor, said.

Russell said that for the last nine days, he’s worked the polls and greeted voters.

“The biggest thrill I have had though was last Friday in Ashe County,” Russell said. “A family got out of the car yelling ‘Mr. Ray, Mr. Ray. It’s my wife’s first time ever to vote as a U.S. citizen.’ That whole family was so thrilled.”

Russell said he believes most people have taken the opportunity to vote for granted and this election is not something to take for granted.

After Russell, Charlie Wallin, county commissioner and candidate for Board of Commissioners District 5, said he wants voters to ensure they vote in every race on the ballot.

“We need to put our foot down on the gas pedal and keep it moving forward,” Wallin said. “We have to elect Democrats up and down this ballot for this nation and this state.”

To follow, Emhoff made a stop at the original Krispy Kreme.

Emhoff then headed to Mazie Woodruff Center, an early voting site in Winston-Salem, to greet voters casting their ballots.

After an hour and a half drive, Emhoff arrived at Booneshine Brewing Co. — a local Boone brewery.

Emhoff ended the event by telling attendees about the record early-voting numbers in North Carolina.

According to the North Carolina State Board of Elections, 18,430 Watauga County residents have cast ballots as of Oct. 25. Of that total, 14,461 have been during early voting. Emhoff said if people aren’t happy with what’s going on, they have to vote.

“People are showing up because they’re just sick and tired of the lies,” Emhoff said. “They want new leadership and they want to elect Joe Biden as your next president.”

Emhoff said the current administration’s handling of COVID-19 is the “most epic failure in the history of our country.”

Emhoff said if Joe Biden and Kamala Harris are elected, their administration will enforce masks, social distancing and free, accessible testing with fast results while improving contract tracing and follow science for a vaccine.

In regards to the economy, Emhoff said Biden has a plan.

“We’re going to invest in small businesses,” Emhoff said. “Trump is focused on wealth, we need to focus on jobs and get manufacturing back in this country with American workers.”

Emhoff said Biden and Harris’ plans to build a clean energy infrastructure will result in millions of high-paying jobs.