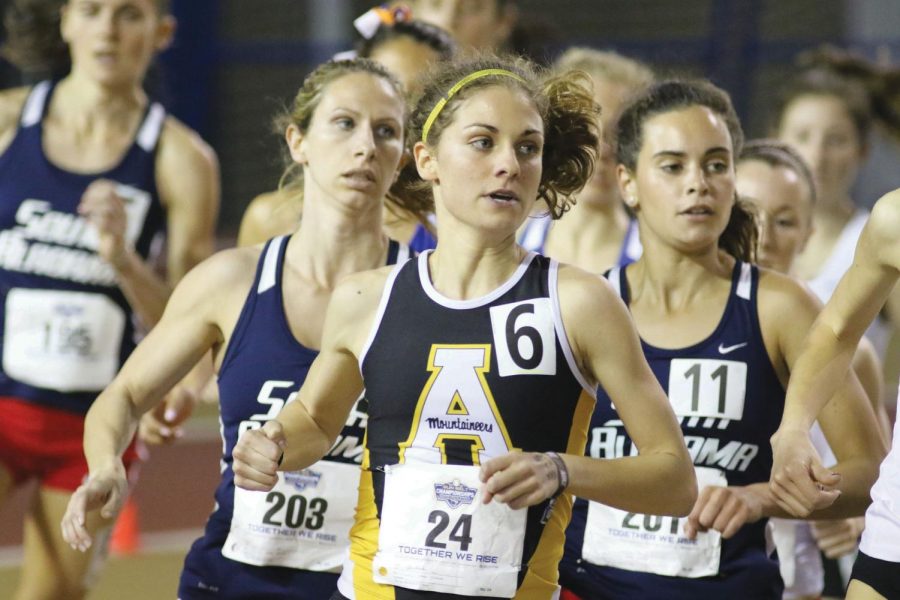 Women's track competes in a team event in the Sun Belt Conference. Photo by Michael Wade.

The App State women’s track and field team is off to a hot start in large part to some stand out performances from the team’s freshmen. The Mountaineers placed first and second in their first two competitive team meets with freshmen leading the team in seven of the 16 event categories.

“I think it’s a good environment for them to come into and see that they can help right away,” head coach Damion McLean said. “As the recruiting process was going on with them last year, we kind of saw that in their performances from high school, and we knew when they got here we could develop them a little bit better for them to help early too.”

“It’s kind of shocking. I didn’t come in with a set goal or anything, so I was just glad that I’m doing good, because, honestly, I was afraid coming in competing at the collegiate level was going to be different,” Smith said.

McLean said Smith was the biggest surprise of the freshman class. After only one semester at App State, she already holds the seventh fastest time in school history in the 300-meter dash with a time of 40.47 seconds.

“I don’t even have a word to describe it; it’s like, ‘Wow I actually did that,’” Smith said.

Hassani Burris, a freshman jumper from Gastonia, holds the team-high in the long jump and the second longest in triple jump, contributing key points to the Mountaineers’ top team finishes.

“I feel pretty good. I was ready for the college experience to see how competitive they are, but I’m like right up there with them, so it’s not too bad,” Burris said.

Despite her early success, Burris said she hasn’t even reached her personal record yet in the triple jump. Burris is ranked in the top 15 in the Sun Belt for the triple jump.

“Hassani is actually a little behind where she was in high school, so that’s my fault as a coach,” McLean said. “So me going forward from here, things are going to get a lot better for her going into indoors and outdoor conference.”

Two freshman also hold the top high jump mark for the team. Kayla Carson and Victoria Wilform, who also plays volleyball, are tied for the top height of 5 feet 3 inches.

“It feels really good because coming out of high school I knew I was a high jumper, and I chose App because I knew the team was so strong,” Carson said. “I’m proud of where I’ve come so far.”

The women’s team finished in fifth place in 2018 year at the Sun Belt Championships with strong performances in multiple distance running and field events. However, the team lost a strong senior class that included Chelsey Hargrave and Jessica Ricks and is looking for these freshmen to fill some of those roles.

“They can fill a lot, but those guys that we had graduate, it’s going to take some good performances from everybody to fill those roles,” McLean said. “It’s going to be a learning and a growth experience for them to get to that level because for those kids who graduated it took them the same way.”

McLean said he believes the combination of his current talented freshmen and his upcoming recruiting classes sets the Mountaineers up for some bright seasons in the future.

“For this to be my first year, we started at a good level recruiting-wise and then we signed a couple of kids this past season, which are going to come in and make a very great impact for us next year,” McLean said.

The team will compete in the Darius Dixon Open Feb. 8-9 at Liberty University, its last meet before the conference indoor championships.