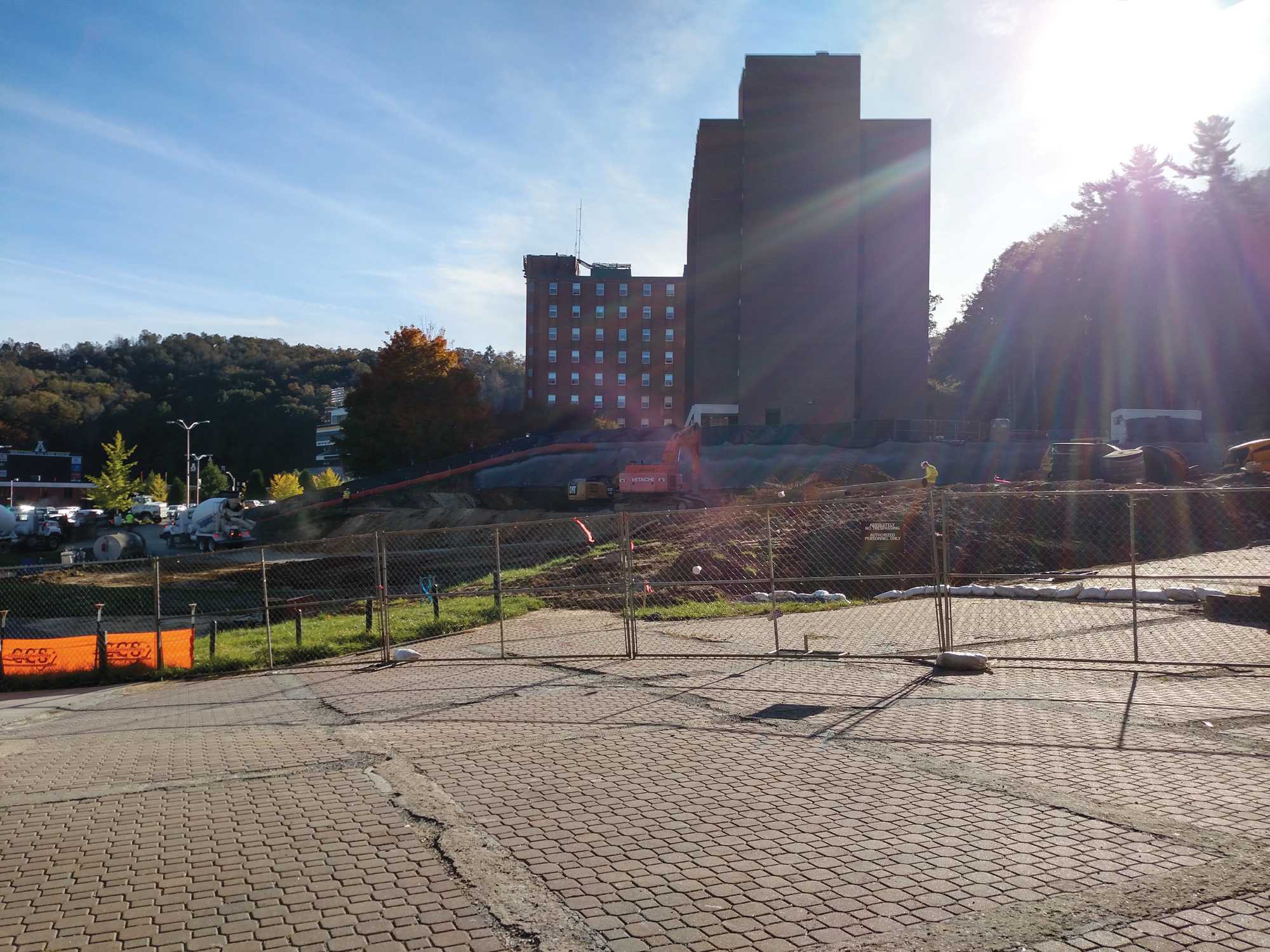 Construction near Eggers Hall on west campus. This construction is one of many building projects happening in Boone.

The University of North Carolina Board of Governors voted to partner App State with private firms for planned redevelopments, which represent about $250 million in planning and construction costs.

The board authorized the construction of a north end zone facility for the Kidd Brewer Stadium, a west campus student housing project in association with Beyond Owners Group, RISE: A Real Estate Company and Choate and funding to the Appalachian 105 Lot and Millennial Campus expansion.

“An enhanced experience for student-athletes and fans can go a long way in recruiting new students,” Doug Gillin, director of athletics, said in an AppalachianToday article.

The north end zone will include conference and continuing education training space, an orthopedic clinic, dining facilities, a team store, hydrotherapy, approximately 1,000 premium club seats and offices for coaches and athletics staff. The facility will be in use by the fall 2020 season and will accommodate various athletic and academic uses, such as athletic training and nutrition science.

Current plans are to provide between 2,100 and 2,200 beds of student housing in three phases, with completion dates of fall 2020, fall 2021 and fall 2022. With a budget of $191 million, the project will include a five-building housing project and one parking deck.

“The ground lease agreement with Beyond will serve as the foundation for related agreements on the development and management of the 1,770-bed and parking deck portion of the project,” App State said in a Watauga Democrat interview.

Three interactive listening sessions were held in January 2018, allowing campus and community members to share ideas for the property’s use, according to App State’s construction website.

Designs for a portion of the project’s development, including competition and training facilities for the university’s track and field, tennis and softball programs, are expected to be $11.8 million, according to App State.

“Other ideas under consideration for future development of the remaining portion of the property include facilities to meet the university’s needs for collaborative academic spaces, event space, parking, residence halls and additional recreation accommodations for students,” App State’s vice chancellor for business affairs Paul Forte said in an interview with AppalachianToday.

Although the project timeline has yet to be determined, the university’s request to move forward with the design process to begin development was approved by the Board of Governors.

“These properties are allowing us to think strategically and creatively about how we can operate as a campus and meet the needs of our region,” Chancellor Sheri Everts said in an interview with AppalachianToday. “They present us with opportunities to think and act in quicker and more nimble ways that further our research and teaching while enhancing economic development.”

Featured photo caption: Construction near Eggers Hall on west campus. This construction is one of many building projects happening in Boone.