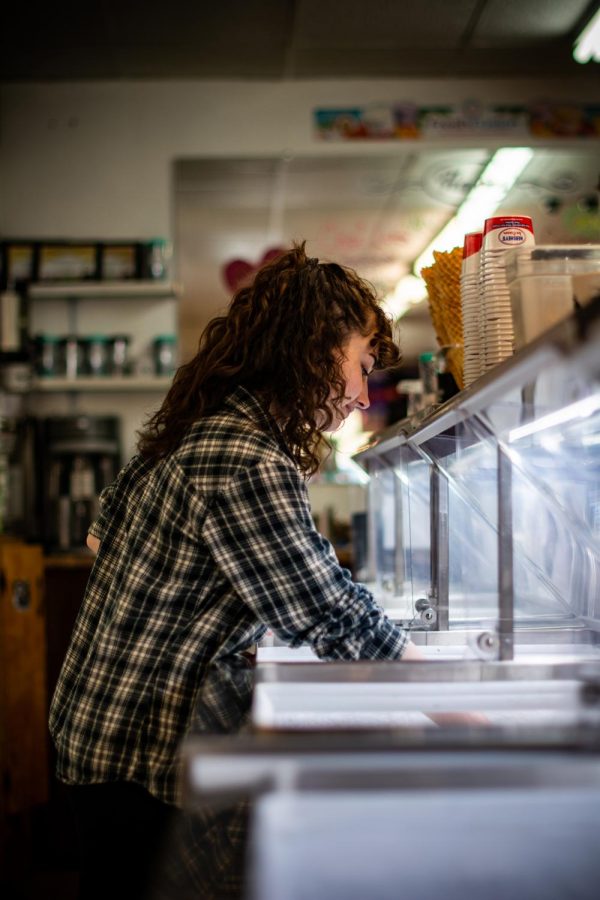 With a sweet-smelling aroma, classic wooden furniture and a smiling face at the counter, King Street Creamery provides a unique mom and pop shop feel.

Part of the downtown scene for nearly six years, the creamery is owned by Karl Smith, who is familiar with King Street business. Smith owns the creamery, Appalachian Tees and Appalachian Sportswear. Smith’s daughter, Katherine Robinson, runs all of his shops.

“I was born and raised here,” Robinson said. “I went to App State. I’m about as local as you can get.”

The creamery is quick to differentiate itself from other ice cream parlors with its selection of ice cream and other desserts. Along with showcasing 36 Hershey’s flavors, the store also offers homemade fudge, milkshakes, smoothies, Appalachia Cookie Co. cookies, Hatchet coffee and T-shirts. This diversity of flavors and products is important with the recent opening of Ben and Jerry’s, a popular ice cream franchise, opening 10 doors down the street.

Junior English major Phoenix Tefel has worked for the creamery since September and has experienced the creamery before and after Ben and Jerry’s opened.

“The winter months are slow, so it hasn’t made a huge difference so far as I can tell,” Tefel said.

Though the creamery hasn’t felt the impact yet, it is preparing to implement new menu items and more community outreach. One of its projects is to find local ice cream.

“By this coming summer I am hoping to bring in locally made North Carolina ice cream,” Robinson said. “It has been really hard to find with the demand we are looking for, but we’re hoping the new ice cream will be a plus.”

The creamery also hopes to draw in customers during the downtown art crawls on the first Friday of every month. The creamery hopes to offer face painting, dancing, live music, tarot card and palm readings. For various holidays, the creamery wants to start doing “Crafts at the Creamery,” which will target families, Robinson said.

“We want to do stuff to get people more involved. You know, you could eat ice cream while you’re drawing. Who wouldn’t love that?” Robinson said.

If Ben and Jerry’s opening has affected business at all, the creamery cannot tell until the warm season returns. As of now, the shop is not worried about where it is headed.

Kayla Smith, who has worked at the creamery for four years and managed it for a year and a half, is confident in the shop’s future.

“We’re a complete functioning coffee shop,” Smith said. “We have the fudge, the cookies. We have a lot of things the competition doesn’t have. Our prices are also way lower, so with everything we have to offer, we’re going to be fine.”

As the creamery looks to the future, Robinson would like to give a word of thanks.

“Ben and Jerry’s has definitely been a push for us,” Robinson said. “Competition is good. It strives us to do better, and for that I am grateful.

“I want to tell people thank you. Thank you for supporting us these last six years. Thank you for bringing your kids and bringing us joy when we see their happy faces. Thank you for that continued support even when there’s competition. We’re still seeing the love.”