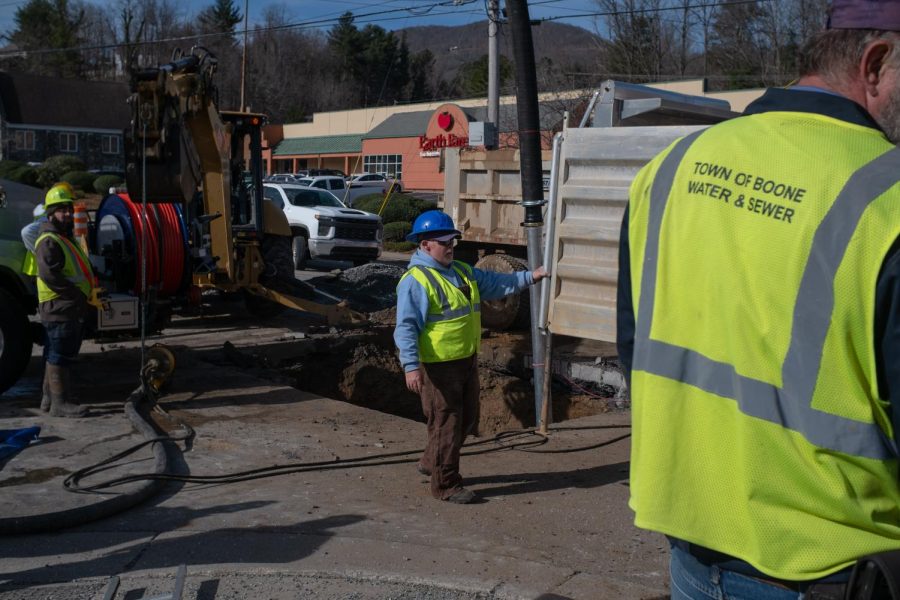 Jimmy Hicks (right) assistant superintendent for the Jimmy Smith Wastewater Treatment Facility, oversees while his team works on the busted pipe Jan. 12, 2022. Hicks said the line was installed during the 1980s.

A water main broke on King Street around 3 a.m. Wednesday, according to a press release published by the Town of Boone Public Works Department.

Water is being restored to affected areas but the boil water advisory will remain in effect until results return tomorrow morning, according to Laney Pilkington, Town of Boone administrative support and communications specialist.

“Residents are to boil all water intended for human consumption. This may include “drinking, making ice, brushing teeth, washing dishes and food preparation,” according to the press release.

“Vigorous boiling for one minute should kill any disease-causing organisms that may be present in the water. This office is strongly urging the water consumers to conserve water whenever possible,” said the PWD.

According to the PWD, when water services are restored, customers may notice noise in the pipes and discoloration of the water due to air entering the pipes. The department wrote that it is no cause for concern.

Both lanes in front of Earth Fare are closed for work on the break. Rebecca Adams, App State senior and Earth Fare employee, was working during the road closure.

“People are having a harder time getting here since the roads are closed, and we can’t run the deli or the meat department,” Adams said. “Also, our bathrooms are technically out of order since you can’t wash your hands.”

App State Alert addressed the incident in an email Wednesday, writing that the university’s water system was not affected by the incident except for 14 buildings that are supplied by the Town of Boone water system.