LAVIER, the prince of trash palace 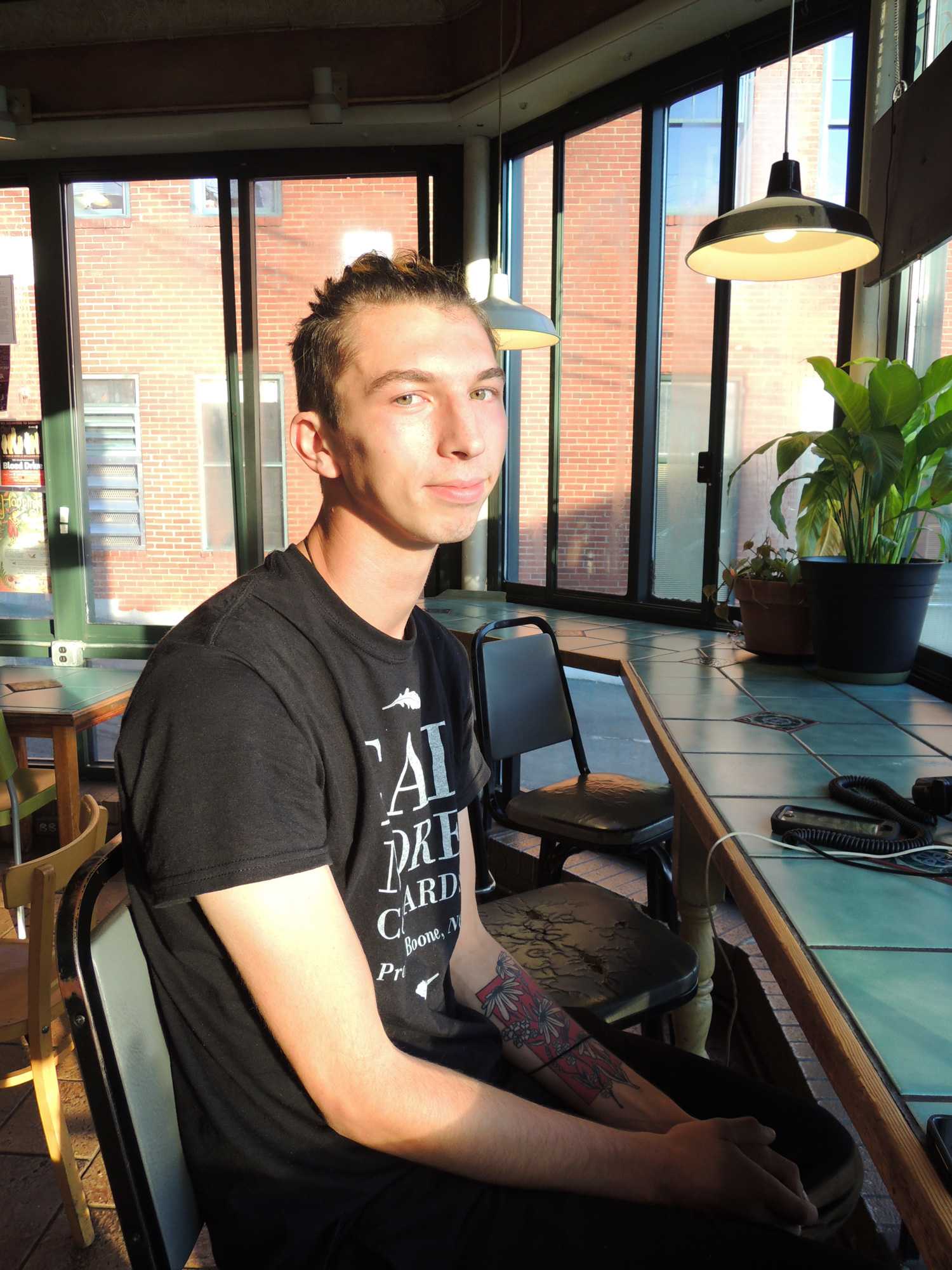 Dylan Evans is the face behind L A V I E R, a band member of both Boys Legs and Ghost Dogs, and a member of Crop Circle Club, along with three additional music collectives titled The Undergrowth, Underground and Midi Boys.

Evans’s solo act is titled L A V I E R, which is his middle name and also the name of his great grandfather. Pronounced “luh-veer”, L A V I E R is what Evans attempts to describe as future jazz, although he said it is difficult to put a label on just exactly what his music sounds like.

John Wampler, vocalist for Ghost Dogs, elaborated that he did not think Evans’ music has always been distinguishable between the electronic and Boone music scene.

“It’s like electronic, but it’s not EDM and it’s not all him playing instruments,” Wampler said “But there’s a lot of production and a lot of stuff going on live. It’s not a DJ set, and it’s not house.”

His inspiration comes from producer Flying Lotus, in addition to his friends and fellow performers JonEcks and Vide, Evans said. Wampler and Jib Butts, vocalist for Boy Legs, insisted the uncommon and individual quality of Evans’s style, even in comparison to those that he looks to for inspiration. Wampler believes that one of the strongest points of Evans’s music is the emotional gravity behind it.

“All the tracks come from his real life,” Wampler said. “Real emotions, stuff he is going through. There’s no disconnect from Dylan and the music that you’re going to hear in any of his stuff. It’s not just cool songs. It’s very personal.”

On Nov. 15, Evans plans to release his full-length album, titled “Prince of Trash Palace.” The album, which will consist of approximately 12 tracks and is about 45 minutes, will be different from his earlier work, Evans said.

“Prince of Trash Palace” is more heartfelt than some of his more recent music, returning to the greater sentimentality behind much of his earlier work, Evans said. He describes the album as having an old feel, but with more knowledge put into it.

“A lot of it is grittier,” Evans said. “I’m trying to make some really pretty stuff, but there’s definitely some aspects of just like lo-fi beat styles. I also think it represents me really well. I’m pretty laid-back.”

“Prince of Trash Palace” will be accessible through Crop Circle Club, Spotify, iTunes, Amazon, Google Play and Evans said it will be recorded on cassette tapes. Evans expressed that cassettes were not only inexpensive but also resounded the nostalgic feel of his music, along with the nostalgic feel of the scene at which he feels most at home: the punk music scene.

The album’s “one-of-a-kind” title was inspired by the dirty apartment that he used to live in, Evans said, along with the more recent, but equally unkempt apartment that he lives in now. Evans acknowledges that the apartment was termed the “Trash Palace” by his friend Rachel and that the phrase has remained ever since.

Jib Butts, friend of Evans and vocalist for Boy Legs, furthered the concept of the Trash Palace, noting that Evans’s apartment is both “trashy and terrible.”

When producing the latest EP for Boy Legs in Evans’ apartments, Butts said the experience wasn’t exactly glamorous, mentioning that it was recorded via a mic that was tied to a lamp with a shoestring.

Evans interest in music began early as he grew up in Pittsburgh, Pennsylvania. As an elementary school kid, Evans took piano lessons, and transitioned to band and orchestra in middle school. In high school, he played cello in the orchestra in addition to guitar.

Throughout the course of his high school years, Evans began to realize that he wanted music to be a serious part of his life. Halfway through high school, he transferred to Lincoln Park Performing Arts Charter, which he attributes to being the time that he began to experiment with his sound.

“I started messing around with producing on the computer,” Evans said. “I was trying to take all of the jazz stuff that I was learning in school and put it into electronic instrumentation.”

At age 19, he moved to attend study within ASU’s recording program, but dropped out after three semesters in order to focus more on his music.

Although lyric-free and instrument dominated, Evans said he wants to honestly permeate his work. With an electronic feel, Evans agrees this is one of the most challenging aspects in developing the new album. When performing live, Evans describes that the emotional connection that he desires is even more well represented.

“Every time I play a show, I write a 100 percent new set, or I at least try to have half of it be stuff that someone has never heard before, Evans said. “A lot of the stuff I play in my live sets will never get released. But I do that on purpose so that people will keep coming out because they know they’re going to hear something different every time.”

Performing as L A V I E R within his future jazz domain was not something that Evans said he planned. Upon moving to Boone, he began to produce music simply to note the reaction of listeners. Within the first few weeks, he was asked to play a show. He did not really know how to perform that style of music yet, but fell “into the groove of it” almost immediately, Evans said. Evans is surprisingly “genteel” and soft-spoken during his performances, a charming contrast to his faded black t-shirt, frayed black jeans and timeworn black vans, Butts said.

Evans will be performing as L A V I E R on Sept. 28 at Legends, along with opening act, Yugo. Evans will also be involved in a Boy Legs performance at Black Cat on Sept. 30, performing along with Michael Mason, Mister, and DJ Yen.

Boy Legs will also be touring throughout the first week of October with four stops in Columbia, South Carolina, Athens, Georgia, Pittsburgh, Pennsylvania and Richmond, Virginia. Evans has often performed this frequently since his arrival in Boone.

“He was hitting it hard taking on three to four shows a week,” Butts said.

Along with his dedication to his music, Evans frequently works on graphic design for his posters and albums, along with designs for Crop Circle Club and various performers throughout Boone. Evans also is responsible for the majority of the details behind Crop Circle Club, Wampler said, stating that he is involved heavily with the social media, art work, design and invites.

“He’s got a lot of drive. He’s got the passion and desire, but also the energy. He constantly invests and puts his time in it,” Wampler said. “He’s got the talent to back it up, too.”

Evans emphasizes the importance of Boy Legs to him, he said, appreciating the lyrics that Butts writes. Overall, Evans enjoys the socially-conscious lyrics behind Boy Legs. Butts said the performances are shouty and raw. “It’s an emotionally taxing performance,” he said.

Butts, along with many, are confident in the trajectory of Evans’s talent.

“Last night, he played his [most recent] beat for me, and he was just sitting on his dirty floor, it’s just this filthy little place, and he’s sitting on this shitty little carpet and playing this fire beat that he made with these iPhone headphones, because his good ones were in my car,” Butts said. “And I just grabbed his face, and I said, ‘It won’t be like this for much longer.’ It’s just so obvious to me.”

Evans recollects not having a job for six months at the beginning, among the other difficulties of starting out. Evans said he is inspired and is looking forward to where his music will end up. With a spirit of contentment, Evans said, “I’ve been growing up a bit. Things are starting to consolidate.”