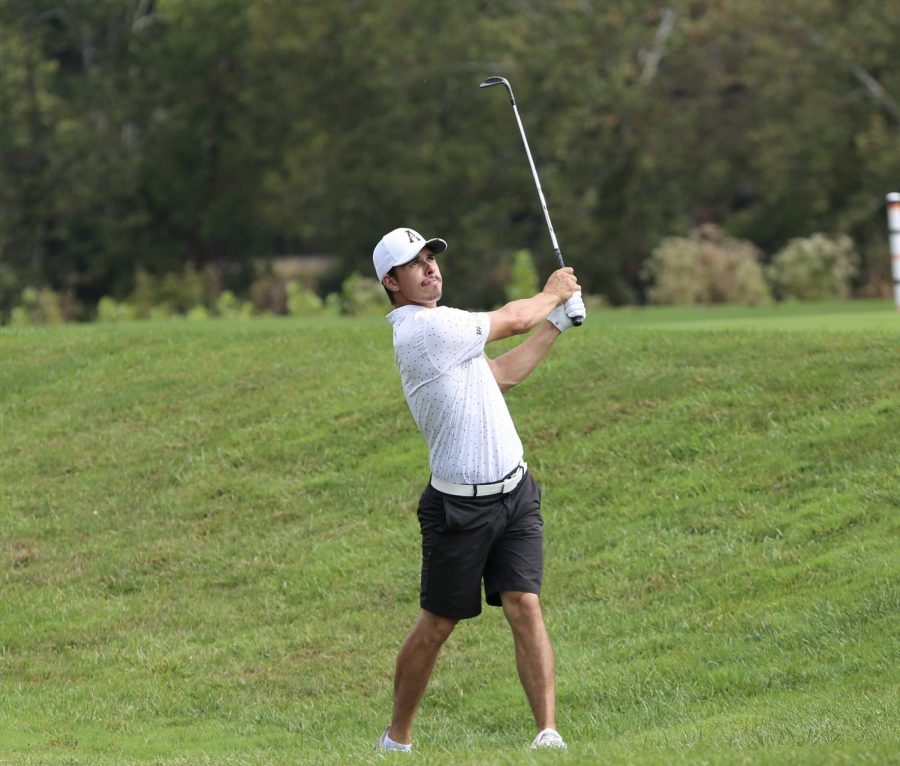 Super senior Jake Lane swings his way to a first place finish at the Highlander Invitational. Lane finished at seven under, one shot ahead of second place.

The App State men’s golf team traveled to Radford, Virginia Oct. 4 to compete in the Highlander Invitational. After tying for 52nd place the week before at the J.T. Poston Invitational, super senior Jake Lane bounced back and played a high level of golf.

Over two 18 hole rounds in one day, Lane posted a bogey-free 68, and a 69 that included four birdies in a five-hole stretch. He ended up shooting seven under through 36 holes, en route to his first individual tournament victory as a Mountaineer.

“I’d attribute the win to my driving,” Lane said. “On that course, it was important to hit fairways and my driver was big for me. I kept it in play every hole and that gave me the chance to make birdies or easy pars.”

In addition to Lane’s driving, his short game stood out to head coach Jason Allison.

“Jake played really smart golf,” Allison said. “He was very good with his wedges around the greens.”

Lane has had a solid career so far at App State. His Highlander Invitational win is added to a resume of 14 top-10 and 11 top-15 finishes as a Mountaineer. Despite finishing close to the top many times, Lane’s hard work throughout his career came to fruition.

“A lot of the time you think, ‘Am I doing the right stuff? What do I need to change in order to win?’ It just takes time,” Lane said “You just can’t quit. If you quit, you can’t win.”

Looking at the rest of the season, the Mountaineers have nine events in front of them. After a strong showing last week, Lane still isn’t satisfied. He has his eyes set on another win by the end of the season.

“Once you get the first win, you prove to yourself that ‘I always knew I could do it. I knew I could handle the pressure,’” Lane said. “Next time I’m in that position, I know exactly what to do.”

Lane’s success continued at the Phoenix Invitational Oct. 11, shooting 10 under over three rounds, including a career-low six under 65. Lane would end up tying for first place on the player leaderboard with two others.