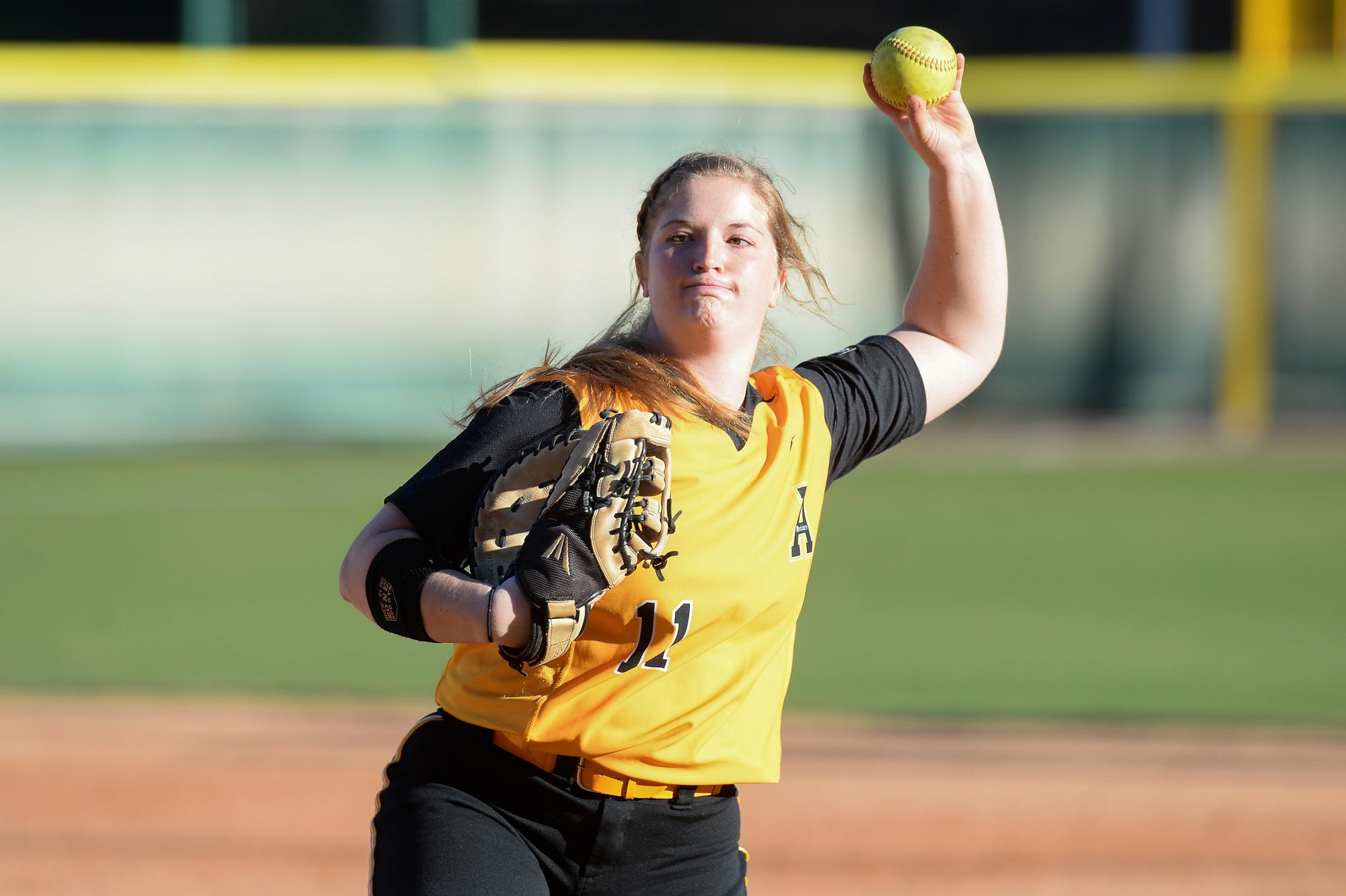 Senior Katie Mathewson winds up to throw the ball to one of her teammates.

The Mountaineers softball team hosted the South Alabama Jaguars in the final game of three game series at Sywassink/Lloyd Family Stadium Sunday afternoon, falling 5-3 after failing to pull off the late comeback.

App State (12-21, 0-9 Sun Belt) dropped their ninth straight game of the season after starting 12-12. With the loss they now have gone 0-9 in Sun Belt play to start the campaign.

The offense for South Alabama on the other hand was active early and often while tallying eight of their 11 hits in the first four innings of the game with Katie Williford and Annaleise Kennedy on the mound.

The offense started in the second inning when Morgan Lutticken singled to drive in a run, followed in the third inning by Destin Vicknair hitting a solo homerun to put the lead at 2-0.

After two RBIs by Kristian Foster and one by Amanda Minahan off of singles in the fourth inning, App State found themselves in a five-run deficit.

But Appalachian cut into that lead off of a two-run homerun by Katie Matthewson in the bottom half of the fourth inning. It was her first homerun of her senior season.

“Being a senior it felt really good to just get that one,” Matthewson said. “Hopefully I’ll get some more, but also it helped lift up my team.”

Prior to the seventh inning, Brown was efficient in mixing up her speeds and locations, utilizing the full frame of the plate. Other than the homerun let up to Matthewson, she was dominant, only allowing two hits.

“Devin Brown is really good. She is a solid pitcher and she has been in the Sun Belt for a couple of years,” head coach Janice Savage said.

In the bottom of the seventh inning is when the Mountaineers showed their fight and cut the lead down to 5-3 after a two-out double by Haley Stewart into the left field corner, putting the tying and go-ahead runners at second and third base.

Pinch hitter Taylor Rivenburgh flied out to second base to end the game though as the Mountaineers just fell short in the quest to their comeback losing by those two runners in scoring position.

Despite the loss, Savage said she liked the fight of her team and sees glimpses of them beginning to turn the corner.

“I was proud of our guys especially with our youth coming out there and battling,” Savage said. “The biggest thing I’m excited about is we are constantly getting closer and closer to where we want to be.”

Confidence for this youthful team is extremely important in a very skilled Sun Belt conference as this program is starting to make some strides and conference play is in full swing.

“We’re starting to figure out that we can do this, and to me that is a huge step for our program,” Savage said.