Late to the party: “Lord of the Rings” review 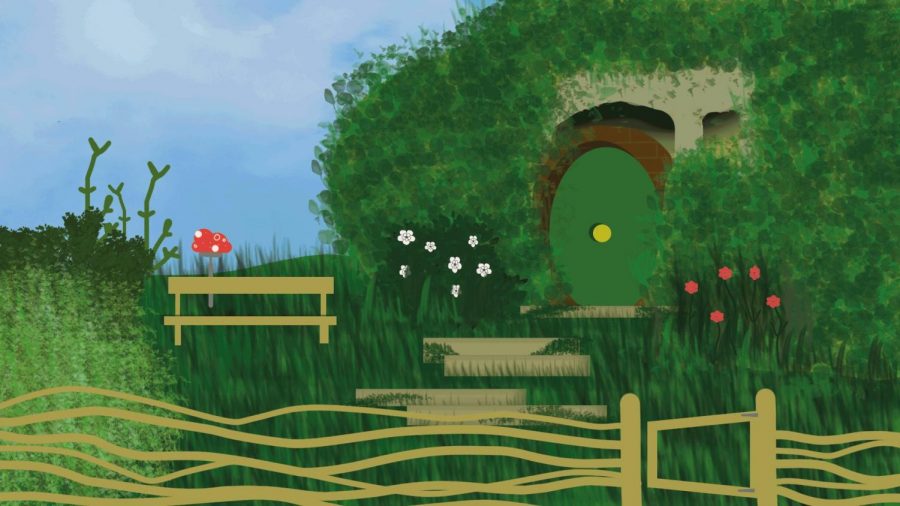 An interpretation of Bag End, where famous character Bilbo Baggins lives. His home is the location of the opening pages, and it is here, during his "eleventy-first" birthday, that the journey of "Lord of the Rings" begins.

For anyone who hasn’t read the lengthy “The Lord of the Rings” books by J.R.R. Tolkien, or who was too young to watch Peter Jackson’s film adaptations of the trilogy in the early 2000s, the extra free time brought by the pandemic has presented the perfect opportunity to do so.

This is all the more appropriate, as Jackson’s trilogy turns 20 this year.

Bingeing the books is more of a marathon than a sprint, but with consistency and taking breaks, it can be done in around a month and a half.

The first third of “The Fellowship of the Ring” can be difficult to get through with its extensive descriptions of forests and poetry, but, adopting an air of admiration, the reader can get through it fine. Once the Fellowship is united, the story and pacing are pretty solid, albeit slow at times, through “The Two Towers.”

“The Return of the King,” in its first two-thirds, is exciting to read but hard to follow. At this point, there are so many characters in the ensemble that it’s hard to tell who’s who and where everyone is located.

While the climax is rewarding to read, the resolution is an additional 50 pages, adding an unnecessary plotline to the end of a book that already had a good ending. Tolkien, of course, knew what he was doing with this sequence as it wraps up several themes brought up earlier in the story, but for a newcomer reading the books in one go, it can be exhausting.

While it seems from this review that the books are a drag, they are rewarding to read and have much to offer in re-reading them. When willing to enjoy Tolkien’s descriptions of natural beauty and his poetic way of conveying this fantasy, the story is truly a sight to behold of the English language.

However, there is nothing more rewarding after reading Tolkien’s epic than basking in the beauty that is Peter Jackson’s faithful adaptation of the trilogy. Going in blind after two decades of hype from fans makes for all the more exciting a viewing experience.

Never before has a film adapted a book with so much effort put into every area of its making. Nearly every aspect of the story is explored and given the attention it deserves. The casting is perfect. The cinematography is gorgeous. The filmmakers used real sets, practical effects and costumes anywhere possible, minimally utilizing computer-generated imagery. It truly feels like the creators wanted this dense fantasy world to be brought wholly to life on screen – and they did it.

For those who took the time to read the whole of Tolkien’s books, it is highly recommended that fans watch the movies’ extended cuts. While difficult to complete in one sitting, they are jam-packed with loads of extra details for fans that took the time and effort to read the source material.

In pandemic times when the world can seem pretty bleak, one of the healthiest ways to use your extra time is to get lost in a world like Middle Earth, whether on page or screen.