On Friday, Nov. 18 a group calling itself AppState Leaks publicly shared a survey conducted by the Faculty Senate that aimed to probe the campus climate on key issues.

Paul Gates, Faculty Senate Chair, said the survey was meant to be circulated internally and that faculty were instructed to not copy or share the contents.

The survey was conducted on a voluntary basis and had a response rate of 55 percent.

Faculty also overwhelmingly indicated that administration should be more transparent with decision making, with 48 percent strongly agreeing with that statement and 31 percent somewhat agreeing.

When asked what they believed the university’s priorities should be respondents rated increasing academic excellence, increasing salaries and benefits and increasing teaching resources highest.

Responses also indicated the administration was appropriately prioritizing diversity and 59 percent of respondents said they would like to continue the university’s current balance of teaching and research.

Of the respondents to the survey 70 percent indicated they were either tenured or tenure track faculty. The highest response rates came from faculty that have either been at the university for less than two years or have been on staff for six to ten years. 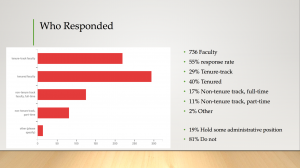 AppState leaks said via an emailed statement they decided to come forward with the survey to facilitate transparency and plan to continue leaking information they consider relevant in the future.