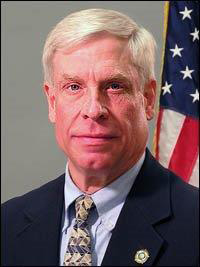 Hagaman has spent the last 12 years as sheriff in Watauga County. Hagaman is a graduate of Watauga High School and App State and  served the Town of Boone as the town manager, Watauga Commissioner and other jobs at App State and the private sector.

Hagaman said that after his experience, nothing surprises him anymore.

Hagaman said Boone is diverse in wealth and race, which leads to many “big city issues.”

“We’ve got people with multi-million dollar homes and we’ve got people that are well below the poverty line,” Hagaman said. “We’ve got seasonal people, students and folks that have been here for generations.”

Hagaman said he recognizes many of the largest problems in the county,  including substance abuse, domestic violence, mental health and recidivism.

Hagaman recently began work on a program led by an App State graduate who interned at the sheriff’s office.

“I’ve started several programs that I would like to see implemented,” Hagaman said. “We actually were successful in finding out that, statistically, the average inmate has been here 14.8 times.”

Hagaman and the student found that 90 percent of inmates were in jail on charges related to substance abuse. Many inmates are also stuck in jail because they cannot afford to pay bond.

“A lot of times, we find that they’ve been in jail awaiting trial longer than the sentence they would’ve received, and that’s not fair to them or their family or their kids,” Hagaman said.

The App State graduate Hagaman worked with is now an employee of the health department, and working on implementing a plan to combat recidivism.

Hagaman said he wants students to know that if someone they know is unresponsive due to alcohol or drugs, they need to call 911, and that the unresponsive person cannot be charged with underage drinking.

“We need to get there quick,” Hagaman said. “Our folks carry narcan, which is an antagonist that eliminates opiates or alcohol, and will reverse it almost immediately.”

The idea, Hagaman said, is to help people who are unresponsive, and to overcome the obstacle of people being afraid to call for help.

“Really and truly, we rarely have issues with students,” Hagaman said. “Mostly it’s parking at a party or noise. When there is a large party, they disperse, they get it.”

Hagaman said he understands and remembers the life of an App State student, as he was one once.  Hagaman said the job of sheriff is always changing.

“Are there bad days? Absolutely, but there’s good days too,” Hagaman said. “A lot of peaks and valleys.”