Letter to the Editor: The Impact of COVID-19 on Students in terms of Housing and Food Insecurity

COVID-19 has notoriously put countless workers in Boone out of a job due to the overwhelming domination of service industry jobs in the market. The largest portion of jobs in Boone are taken up by food service positions as well as retail, management, and other service industries. Of food service positions alone, according to census data from 2019, over 30% of all jobs in Boone are service industry positions with another 15% falling into retail positions. All of these have been drastically affected by recent closures due to the outbreak of COVID-19 and current preventative measures put in place by Gov. Roy Cooper.

It doesn’t take much to notice the exodus of students from Boone recently. Countless students were forced out of their dorms without a refund as of March 23. While the importance of having students move back home to prevent the spread of COVID-19 is not to be ignored, it placed many students in positions of economic uncertainty. Many of these students consequently lost their jobs if they were not already laid off or put on zero hours at their service industry positions. For students living in the dorms, that is frequently the only option for housing that they have in town. Research displayed at the Carolina’s College Hunger Summit emphasized that many students have nowhere else to go outside of their dorms, with many of these at-risk students depending on local jobs in order to fund their education. Without access to housing in town, students are forced to leave, putting them both out of housing as well as a job. With recent closures of dine-in options at campus dining halls, numerous student employees have been put out of a job. In addition, all students unable to work from home have had their hours reduced to zero by the university due to recent closures. This change has disproportionately impacted food-service employees, by far the largest employment source on campus for students, due to the nature of the work and the inability to have food service employees work from home. Put shortly, almost all food service student employees are now without work aside from those who work at one of two markets on campus.

COVID-19 did not only affect students who live on campus either. The outbreak has disproportionately affected service-based positions that are largely now either shut down or running on reduced levels. One look at a popular Facebook page used by students and non-students alike, App State Classifieds, will show the increasing number of students attempting to get out of their off-campus leases in Boone due to university and service industry closures. Quite frankly, it’s all that one sees on App State Classifieds these days, out of a few folks going stir-crazy arguing over toilet paper. Many students are faced with the unrealistic possibility of paying rent without jobs or parents to support them. However, over 50% of students at Appalachian State have household incomes placing them well above the margin of economic anxiety in this situation, but for those who work part-time or full-time jobs to pay for school, this outbreak has put them both into fear of medical as well as economic crisis.

COVID-19 is more than a pandemic. More than anything, this virus has threatened the economic wellbeing of countless Americans, especially students, and forced many workers and students to lose access to their jobs as well as housing. One more important consequence of the outbreak has been the increasing rarity of basic foodstuffs within Watauga County. Whether it be the fault of the doomsday preppers, the scalpers trying to sell toilet paper online, or simply a failure of our current supply-chains to grocery stores, it’s not too easy to come by cheap food on a student budget this past two weeks in Boone. When contacted to provide comment on recent shortages and their causes, one local grocery store employee, and former coworker of mine, John Cathcart, commented that, “there’s [sic] a lot of empty shelves right now both because of a mad rush of shoppers and interrupted supply lines.” He continued that in one instance, a truck of paper goods was returned to the distributor over fear of COVID-19 spread through the product. After things slowed down after the initial rush of preppers, the employee commented that stores are having a hard time restocking shelves due to disruptions in the supply-chain.

Another grocery store employee that preferred to stay anonymous emphasized that her store had only received a small percentage of their regular orders to the store. The suggested cause was stated to be an issue in the supply-chain coming from international distribution centers consequential from COVID-19. Further, product is currently supplied to stores with higher populations and gross sales compared to Boone locations. Finally, workers at her store are asked to engage in social-distancing practices, limiting stockers to one per aisle. As a result of low shipments, higher purchasing volumes by customers, and lower productivity in stocking isles, many stores are unable to provide foodstuffs that many folks depend on. Aside from the issues of scarcity and productivity, she stated that the entire grocery store is very, “weird and dystopian,” in the recent weeks with a constant fear of catching COVID-19 from customers who come in with obvious colds or coughs. Despite these fears, workers are both forced to come to work as well as depended on by the local community for grocery needs during these confusing times.

Of the litter of corporate grocers in Boone, one grocery store stuck out as fully stocked and dependable during this crisis. Fruits, Veggies, & More on King St. has maintained a full stock of produce, meats, and breads during this economic downturn. Most importantly, yes, they have plenty of toilet paper in stock. In a conversation with one of the check-out clerks at Fruits, Veggies, & More, she mentioned that they have experienced no shortages of shipments in recent weeks like their corporate counterparts around town. Fruits, Veggies, & More also provides some of the most affordable groceries in town, positioning it as a relatively unknown solution to some of the food insecurity issues in Boone.

COVID-19 has exaggerated the present food insecurity crisis faced by students at Appalachian State by introducing a new difficulty in acquiring sufficient foodstuffs from local grocers as well as by harming the student job market as well as university provided food services.

Alternatively, many folks have turned to some lesser used stores for these hygienics and paper goods such as Staples. An employee at Staples stated that during the leadup to the current closures and shortages surrounding the COVID-19 outbreak many preppers would come into the store buying nearly twenty items each of toilet paper, hand sanitizer, and other related goods. In response, Staples placed rationing guidelines on most of these items limiting them to one per customer. The employee requested to be made anonymous.

In response to shortages as well as current issues related to COVID-19, Harris Teeter has begun to ration certain goods such as toilet paper as well as hand sanitizer. Publix recently placed a limit on the goods that both in-store and instacart shoppers could purchase, mostly limited to things such as pasta, canned goods, rice, and some bulk potatoes. Harris Teeter, in similar fashion to their hiring many of the workers laid-off during the Earth Fare closure, has begun hiring many workers facing lay-offs or reduced hours at other jobs in order to help alleviate the impact on the community brought by COVID-19.

In addition to closures, lay-offs, and other economic crises, numerous App State students have lost access to their meal-plans which many of them depended on for access to food for the coming months. Before the outbreak, Jeff Bortz’s study in 2017 suggested that 2/3 of all Appalachian State University students were already food insecure, even if they were on a meal plan. Somewhat terrifyingly, the minute Appalachian State University students step on campus and operate on a university-mandated meal plan, they become three times more likely to lose regular access to meals to fulfill dietary requirements, i.e., they become food insecure.

So, what does this crisis of food insecurity mean now that COVID-19 has made its way into each of our lives? It means that for those students who depended on access to university housing as well as university meals, they are now far more at risk for both homelessness as well as food insecurity, even more so than before. Meanwhile, the university has dragged its feet in issuing well-deserved refunds to students who no longer have access to these resources. One or two weeks is frankly all it takes to put someone into the realistic situation of homelessness or food insecurity. COVID-19 has not changed the systems in place within our current system in the slightest, rather it has made bare the flaws in the system that so many workers, students, and others face every day. If something does not change rapidly, I fear for the reality of poverty that many students may be forced to face.

I do not think it’s fair to talk about this crisis without doing my best to mention the resources available that I’m aware of in our community that may be of help to students who may be experiencing this crisis that I’ve thus far discussed. The Hospitality House of Boone offers a food pantry as well as grocery pick-up for at-risk individuals. Further, the Hospitality House as of now provides three meals a day seven days a week in their kitchen. Important to note, the Hospitality House is in need of both volunteers and donations currently due to increased services provided during the outbreak of COVID-19. In a similar vein, the university hosts a food pantry in the basement of East Hall that is available to all students. However, the other food pantries on campus including one located in Garwood Hall are currently closed. A more comprehensive list of resources available during the COVID-19 outbreak has been provided by Appalachian State University here. For those looking to further assist at-risk individuals in our community, please see the attached flyer for means to donate to a local mutual-aid group. 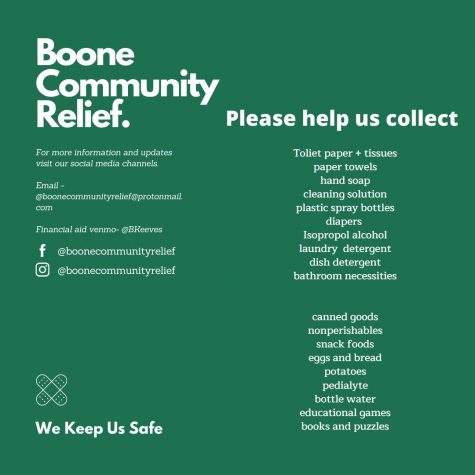 Thomas McLamb is a current undergraduate history major and researcher on housing and food insecurity alongside Dr. Jeff Bortz and Rhiannon Reed-Kelly. McLamb, Bortz and Reed-Kelly recently conducted a survey of food and housing insecurity affecting Appalachian State University students as a follow-up to a survey and research project spearheaded by Jeff Bortz in 2017-2018. Thomas has also worked for Appalachian State University’s peer-reviewed undergraduate history journal History Matters for around two years and now serves as the Editor-in-Chief of the journal.