LGBTQ+ students at App State: A Timeline of their history and progress made 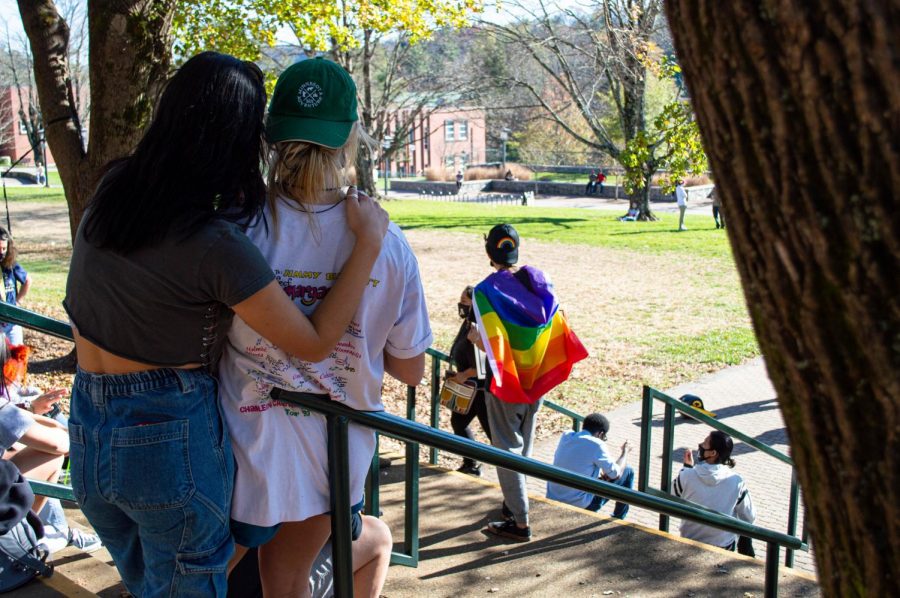 LGBTQ+ supporters looked on as a group of Trump supporters calling themselves "Today is America" counter protested the post-election solidarity event held by Young Revolutionaries of Boone and Black in Boone on Sanford Mall on Friday afternoon.

For the week of April 19 to the 23, App State hosts its own “Pride Week” in conjunction with the Henderson Springs LGBT Center and the Women’s Center. The week consists of events like “Coming Out!” on Sanford Mall and Lavender Graduation in the student union.

In 1999, President Bill Clinton named the month of June Gay and Lesbian Pride Month to commemorate the Stonewall Riots.

Police raided the Stonewall Inn in Greenwich Village, a gay bar, after midnight on June 28, 1969. Police could legally raid the club for selling liquor without a license, though the gay community and other gay clubs constantly were targets of police brutality. Police arrested many patrons and anger grew into protests. The crowd fought against the injustices sought on the LGBTQ+ community, creating The Stonewall Riots.

To commemorate its anniversary, the next year, organizers marched from Stonewall up 6th Avenue and sparked gay pride parades all over the nation.

Here is a timeline of campus events related to awareness for the LGBTQ+ community.

1976: The Counseling Center forms a support group for gay students on campus

1979: The Gay Awareness Organization is formed under the direction of Jeff Isenhour.  “The purpose of this organization is to provide information and awareness, to improve the stereotyped image of the gay, to inform the campus on the needs of the gay, and to form a network for gays to communicate with each other,” Isenhour said. The organization is granted a charter by the student government association and, after months of controversy, is endorsed as an official club by Chancellor Herbert Wey

1986: An AIDS Advisory Council is formed to educate students on the disease

1993: SAGA is renamed to B-GLAD: Bisexuals, Gays and Lesbians Associated for Diversity

1999: Students participate in the Gay, Lesbian & Straight Education Network’s Day of Silence on April 7, where gay, lesbian, bisexual and transgender students wore tape over their mouths and handed out fliers for awareness

The Henderson Springs LGBT Center acts as a support system for App State’s LGBTQ+ students and allies. It offers resources and education, and holds events such as LGBT 101 in which participants learn the basics of LGBTQ+ with information on common terminology, inclusive language and what to do when someone comes out to you.

Jean Thielen is a volunteer for the center who credits it as contributing to a safe environment for LGBTQ+ students. Thielen is a bisexual transgender man.

“I’m not sure I would use the word ‘thrive’ to describe what Appalachian does for their LGBTQ+ students, but it does offer a better environment than a lot of places,” Thielen said. “(The LGBT center) immediately made me feel more comfortable coming to App, because there wasn’t anything like it growing up, and it was the first time I had a group of people that I knew I could safely be out around instead of just scattered individuals.”

Thielen feels lucky to not have experienced much negativity toward his identity on campus. However, he said he acknowledges one shared problem among trans people: he’s heard teachers use the wrong pronoun for trans students after stating their identity to the class, a microaggression.

When professors ask for introductions at the beginning of a semester, they often make a point to ask for pronouns. This is a cause the LGBT center and students alike have advocated for in recent years.

“I don’t believe it comes from a place of malicious intent, but it still hurts to be called something you aren’t,” Thielen said.

Mira Jones, who uses they and them pronouns, also works in the LGBT center and plans events like Pride, which didn’t happen this year because of COVID-19.

Unlike Thielen, Jones said most of their professors have respected and remembered their pronouns, though Jones has heard “horror stories” from the trans community at App State in which teachers refuse to respect pronouns.

Jones says the LGBT 101 event could be more useful for inclusion if promoted better or if it was part of the curriculum for incoming students.

“Unfortunately, not many students take time out of their day to go and the center doesn’t have the resources or manpower to hold it more than once a semester,” Jones said.

Both Jones and Thielen say that the campus environment could be more inclusive.

Tim Reis, a bisexual student who left and came back to App State said the friends he’s met at school are the most supportive people he’s known. They make Reis feel assured and happy in his identity.

Reis said he has experienced bisexual erasure on campus from both straight and gay peers. Bisexual erasure or invisibility is the act of attempting to falsify and delegitimize bisexuality as an identity, like telling bisexual people they’re confused and are really either gay or straight.

“In many ways it made me question my own identity,” Reis said. “This time has been entirely different however, and I have experienced nothing but positivity.”

Reis also said the LGBT Center is a safe spot, but that it should be more prominent on campus.

“The LGBT Center is a valuable resource, but it feels so tucked away. The center, like the people it represents, deserves more visibility,” Reis said.

Other resources Fleming said are available include the Dean of Students Office, the Office of Intercultural Student Affairs, the Title IX Office, and the Counseling Center.