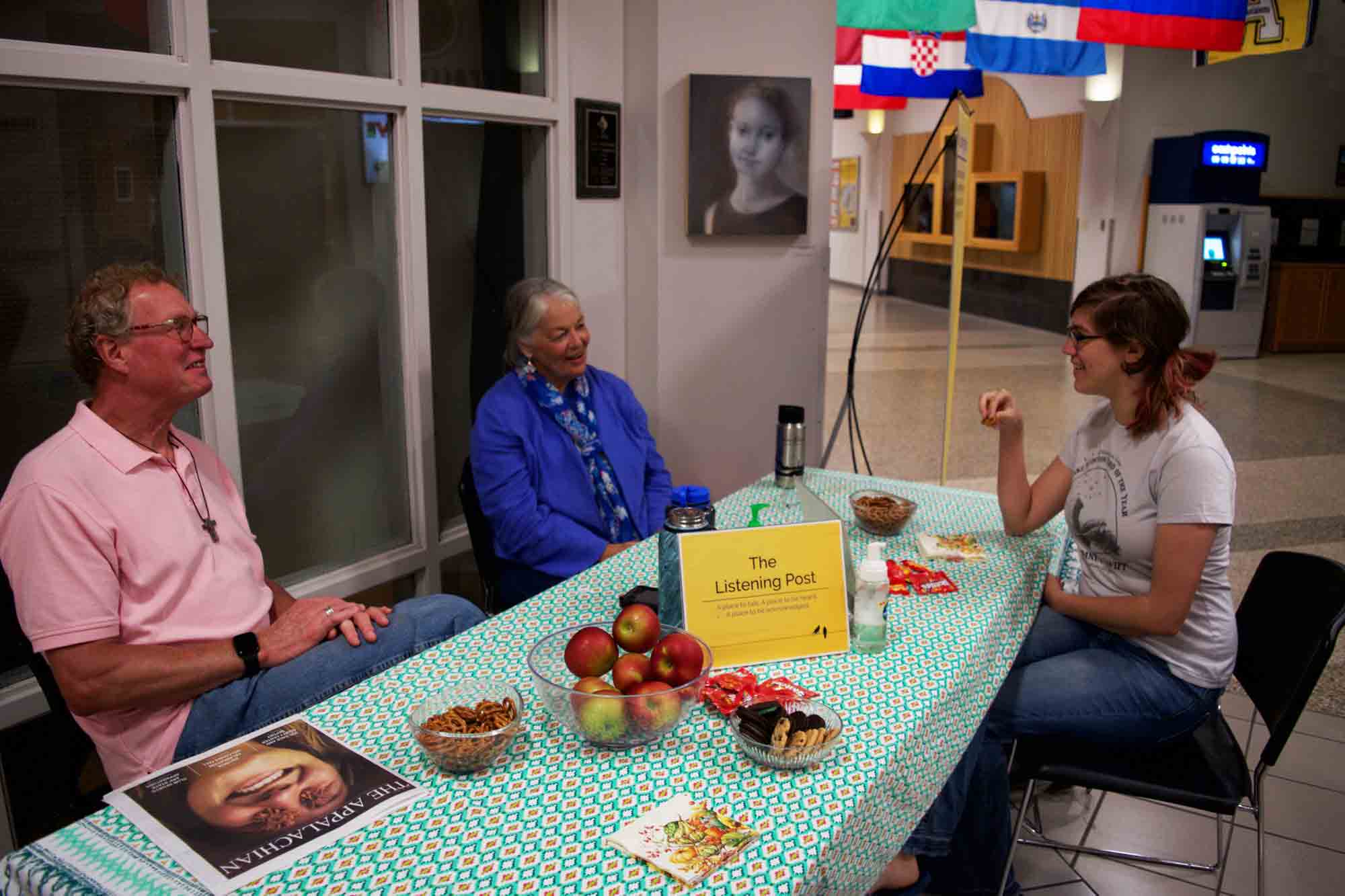 With so many distractions in Plemmons Student Union, it’s easy to miss the small rectangular table, covered with treats and goodies, located under the Venezuelan flag in the international hallway. A smiling man and woman sit at the table. The Listening Post is just as it sounds. It is open to any student or faculty member in need of a listening ear.

The listeners are not in the union to “tell you what to do,” Mike Osbourne, an avid volunteer and listener at The Listening Post, said. “It’s to allow you to decide yourself by getting you to talk about it.”

“We have neighbors who have done this for several years and we’re both alumni of Appalachian, so it’s a way to give back,” volunteer Dorothy Osbourne said.

Many of the volunteers are App State alumni who have given their time and effort back to the school. When the volunteers were in school, however, the topic of mental health was not a subject of discussion.

“If you were stressed out you didn’t tell anybody,” volunteer Maurice Ewing said.

The Listening Post was founded in 1979 at the University of Denver, but it came to App State as a reaction to the 1999 Columbine High School shooting, according to “A Rumple Minute for Mission.” The idea was that if someone could have listened to the difficulties students were having, then the tragedy could have been avoided.

The Listening Post volunteers can refer students or staff to proper mental health services if they feel they cannot handle their situation. Volunteers are also trained for any mental or physical emergency that may arise.

“We had a young person come in who came and collapsed the first Thursday here,” Osbourne said. “They didn’t know what to do with him because we never had anything like that before.”

Another incident occurred with an honorably discharged Marine with two tours of combat duty in the Middle East. He suffered from post-traumatic stress disorder and was considering suicide. After talking with the listener for a short time, the young man abruptly arose to leave. The listener followed him down the hall, stopped him from leaving the building and walked him straight to the counseling center where professional counselors assured his safety.

All of The Listening Post volunteers are trained on how to be active listeners and are given a run-down on the numerous campus services that help students in need, including suicide prevention training and the counseling center.

The purpose of the Listening Post is to provide a safe, non-judgmental place for students or staff to talk about anything on their mind, Ewing said.

Although The Listening Post volunteers are faced with many individuals wanting a solution to their problems, they know each visitor has the answer to their own problem. The Listening Post believes that people need “some encouragement to come up what they already know is the right answer,” Ewing said.

The Listening Post is open on Tuesdays and Thursdays between 10 a.m. and 3 p.m. at the Plemmons Student Union in the International Hall of Flags and on Wednesdays between 11:30 a.m. and 1 p.m. at Park Place Cafe in Trivette Hall.